From Infogalactic: the planetary knowledge core
Jump to: navigation, search
For other uses, see Piceno. 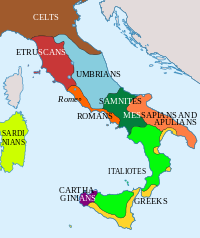 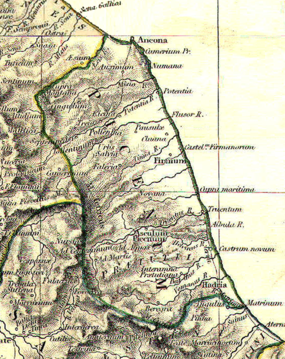 Picenum (Ancient Greek: Πικηνόν, Πικεντίνη) was a region of ancient Italy. The name is an exonym assigned by the Romans, who conquered and incorporated it into the Roman Republic. Picenum was the birthplace of such notables as Pompey the Great and his father Pompeius Strabo. It was situated in what is now Marche. The Piceni or Picentes were the native population of Picenum, but they were not of uniform ethnicity. They maintained a religious centre in Cupra Marittima, in honor of the goddess Cupra.

Picenum and the Picentes are described in some detail by the Roman geographers.

Strabo places Picenum between the Apennines and the Adriatic Sea from the mouth of the Aesis River southward to Castrum at the mouth of the Truentinus River, some 800 stadia, which is 148 km (92 mi) using 185 m/stadion. For cities he includes from north to south Ancona, Auxumum, Septempeda (San Severino Marche), Pneuentia, Potentia, Firmum Picenum with port at Castellum (Porto di Fermo), Cupra Maritima, Truentum on the Truentinus (Tronto) and finally Castrum Novum and Matrinum on the Matrinus (Piomba), south of Silvi in Abruzzo. This is a list of coastal communities. Strabo also mentions Adria (Atri, Italy) and Asculum Picenum (Ascoli Piceno) in the interior. The width of Picenum inland varies irregularly, he says.[1]

First settled at the beginning of the Iron Age (1200 BC – 400 AD),[2] Picenum later became one of the eleven districts of Italy. The three interior towns of the region possessed an urban layout and appeared to be economically successful, so it is unknown what caused this city[which?] to decline in later years.[3]

In 268 BC the consuls Appius Claudius Russus and Publius Sempronius Sophus conducted a pincer operation against Picenum. The Picentes, who has been Roman allies, had rebelled. [4] Part of the population was deported and those who were not were given Roman citizenship without the right to vote. Thus, Picenum was annexed, except for the city of Ausculum, which was considered an allied city. To keep her under control, the colony of Firmum was established nearby in 264 BC.

According to Polybius (Histories 2:21), during the consulship of Marcus Aemilius Lepidus (232 BC), "the Romans divided among their citizens the territory in Gaul known as Picenum, from which they had ejected the Senones when they conquered them".

Picenum is best known for siding with Rome against Hannibal during the Punic Wars. It also became a Roman base during the Social Wars, showing Picenum’s Roman allegiance during the war for Italian citizenship.

Excavations performed in the late 19th century in Picenum give some insight into the region during the Iron Age. Excavated tombs in Novilara of the Molaroni and Servici cemeteries show that the Piceni laid bodies in the ground wrapped in garments they had worn in life.[5]

Warriors would be buried in the ground with a helmet, weapons and vessels for food and drinks. Buried beads, bone, fibulae and amber seem to demonstrate that there was an active trade in the ninth and perhaps tenth centuries on the Adriatic coast, especially in the fields of amber and beads of glass paste. In women’s graves there is a large abundance of ornaments made of bronze and iron.[6]

Origins of these items may also show that the Piceni may have looked to the south and east for development.[7]

The warrior tombs seem to show that the Piceni were a war-like people. Every man’s grave contained more or less a complete outfit of a warrior, with the most frequent weapon being a spear. Piceni swords appear to be imported from the Balkans.[8]

South Picene, written in an unusual version of the Italic alphabet, has been identified as a Sabellic language that is neither Oscan nor Umbrian.

The undeciphered North Picene, also written in a form of the Old Italic alphabet, is probably unrelated and, at present, it is generally assumed not to be an Indo-European language.