Pico Island (Ilha do Pico, Portuguese pronunciation: [ˈiʎɐ du ˈpiku]), is an island in the Central Group of the Portuguese Azores. The landscape features an eponymous volcano, Ponta do Pico, which is the highest mountain in Portugal, the Azores, and the highest elevation of the Mid-Atlantic Ridge. In the tradition of the Portuguese poet, Raul Brandão, Pico is referred to as the Ilha Preta ("Black Island"), for its black volcanic earth, responsible for its UNESCO-designated historical vineyards that allowed the development of the island. 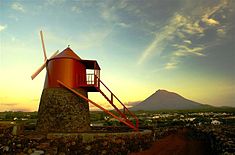 A traditional windmill along the coast of Monte, in the municipality of Madalena

After depositing herds on the island in the first half of the 15th Century, the first colonies were formed around 1460 from settlers from the north of Portugal (by way of Terceira and Graciosa). Its first Captain-Donatário was Álvaro de Ornelas, but who never took up his role on the island, as it was incorporated into Captaincy of Faial. Lajes was its first entitled village, closely followed by São Roque in 1542. Its settlers were initially occupied with wheat cultivation in addition to the exploration of the woad industry (based on lichens that were exported to Flanders to produce commercial dyes), and heavily influenced by export industries of its island neighbor, Faial.

Quickly, the viticulture industry, helped by the rich soils and micro-climates had allowed to expand the lands cultivating grapes. Its development would occur uninterrupted along the margins of history except for volcanic eruptions during the 18th Century; the viticulture and "orange cycle" would expand the activities on the island throughout the period. In 1723 Madalena is elevated to the status of "town", confirming its economic importance to the island, and its commercial links to Faial (Horta had been the residence of many of the island's property-owners and winemakers). Pico's famous verdelho, for more than two centuries, was appreciated in many countries (including England and in the Americas and even reached the palaces of the Russian czars). But, the spread of powdery mildew and phylloxera during the middle of the 19th Century destroyed many of the vineyards creating a crisis on the island that lasted until the 20th Century.

The presence of American whalers in the waters of the Azores introduced a new economy at the end of the 18th Century that would serve to stabilize the economy, until new casts were introduced on the island. Whaling became the primary industry around the island until the 1970s.

File:As nuvens galgam a Montanha, ilha do Pico, Açores.JPG
An area in the part of the island, showing cloud-cover adjacent to the summit
File:Ilhéus do Pico, ilha do Faial ao fundo, Açores.jpg
The two islets at the entrance to Madalena harbor, formed from a submerged crater 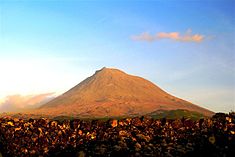 The silhouette of the mountain, overlooking the hedge-rows dividing the vineyards of Pico

The island is 17.5 km south of São Jorge and just 7 km east of Faial, in the Central Group of islands, an area that is colloquially known as o Triangulo (The Triangle). Pico is 46 kilometers long, and at its maximum extent about 16 kilometers wide, rising from its center to the west in the summit of the stratovolcano of Pico; making it the second largest of the Azores islands. Along the central plain of volcano cones to the eastern coast the landscape is pitted with the remnants of craters and lake-filled cones, and dominated by the ancient volcano of Topo. Geomorphologically, the island is composed of three units:

Generally, the island of Pico's tectonic structures are oriented along a west-northwest to east-southeast and a northeast to southwest axis. The main axis controls the main structures, especially the main mountain of Pico, while the secondary axises affect the radial fractures and faults along the central plain and eastern volcano.

Similar to the geomorphological structures described above, the volcanic landforms have been identified by Madeira (1998) in the following units:

The last volcanic eruption (which is debatable) occurred in 1963, in a small submarine eruption off the northwest coast (north of Cachorro in Santa Luzia). Prior to this, major volcanic activity was only evident in lava fields generated in the areas of Prainha (1562–64), Santa Luzia (1718), São João (1718) and Silveira (1720). The paths of the lava flows are still visible, those in the 16th Century and 1718 were particularly substantial, extending for over 10 km. Today, the only visible evidence of active volcanism appears on the summit of Pico, in the base and interior of the Piqueninho (the mini-peak on the summit); there are irregular emissions from cracks in this zone. Additionally, there are emissions on the eastern flanks between 1500 and 2000 meters altitude. There have also been found areas of de-gasification along the a fault associated with the Lagoa do Capitão and another in the Topo Volcano, as well as a spring rich in CO2 in the area of Silveira.

Pico, much like the other islands, are susceptible to seismic events, although their epicenters have primarily been localized in the Faial-Pico or Pico-São Jorge Channels. The strongest earthquake registered in the last 30 years occurred on July 9, 1998, and had its epicenter 5 kilometers northeast of Ponta da Ribeirinha, on the island of Faial, reaching a 5.8 magnitude. It was felt on Pico, with a maximum intensity level of VII on the Mercalli scale; some homes were damaged and possessions were buffeted. Other violent earthquakes which have affected the island include: the 1957-58 seismic events associated with the eruption of the Capelinhos volcano (on Faial), the February 1964 earthquake on the island of São Jorge, and the 1926 earthquake, whose epicenter was registered in the Faial-Pico Channel.

File:Pico100.jpg
The village of Madalena at the western base of Mount Pico, as seen from the Faial-Pico Channel
File:PIC LAJ Lajes do Pico.JPG
Lajes do Pico, along the south-central coast, with Mount Pico in the distance

The main settlements are the capital Madalena, São Roque do Pico and Lajes do Pico, the total population is 15,761 inhabitants (as of 2007).

The island supported a substantial whaling industry until 1980. The position of the island on the Mid-Atlantic Ridge means that deep water is very close. Active industries include tourism, shipbuilding and wine production. Landscape of the Pico Island Vineyard Culture has been a UNESCO World Heritage Site since 2004. It has several notable wines, that are commercialized in Portugal and exported abroad.