From Infogalactic: the planetary knowledge core
Jump to: navigation, search
Not to be confused with Piero di Cosimo, the painter. 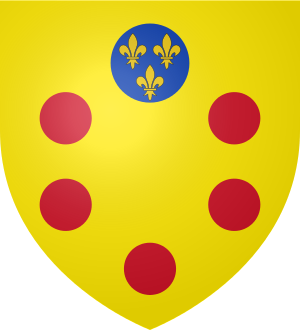 The augmented coat of arms granted to Piero by Louis XI in 1465, replacing one of the six "balls" or palle of the family arms by a somewhat larger ball showing the arms of France.

Piero was the son of Cosimo de' Medici the Elder and Contessina de' Bardi.[2] During his father's life he did not play an extensive role due to his perpetual poor health, the source of his nickname. His brother Giovanni was named as Cosimo's executor, but predeceased his father. In 1461, Piero was the last Medici elected to the office of Gonfaloniere.[citation needed] His gout often kept him confined to bed.[3] This meant that his bedroom effectively became his office where he would conduct political meetings, and led to the Medici palace becoming the seat of government.[3]

Upon taking over the family Medici bank from his father, Piero had a financial overview prepared. The results led him to call up a number of long-standing loans, many to various Medici supporters, which his father had let stand. This immediately drove a good number of the merchants involved into bankruptcy, and added to the ranks of those who opposed the Medici. Although not as brilliant a banker as his father, he was able to keep things running smoothly during his tenure.

His time as leader of Florence was marked by an attempted coup led by Luca Pitti, Niccolò Soderini, Diotisalvi Neroni, Angelo Acciaiuoli and his cousin Pierfrancesco de' Medici, using troops provided by Borso d'Este, Duke of Modena and Reggio, and commanded by his brother Ercole d'Este (planned for 26 August 1466). Piero was warned by Giovanni II Bentivoglio, and was able to escape the coup, in part because his son Lorenzo discovered a road-block set up by the conspirators to capture Piero in his trip towards the Medici villa at Careggi; he was not recognized, and was able to warn his father. The coup failed, as did an attempted repeat backed by Venice, using troops commanded by Bartolomeo Colleoni.

In 1467 Piero had to face the war against the Republic of Venice, prompted by the Florentine support given to Galeazzo Maria Sforza, the new duke of Milan. However, the Venetian army under Colleoni was defeated at the Battle of Molinella by the league of Florence, Naples, Papal States and Milan.

He also continued the family's tradition of artistic patronage, including Gozzoli's fresco Procession of the Magi in Palazzo Medici Riccardi (in which are also present both of Piero's sons, Lorenzo and Giuliano, as well as Piero himself). His taste was more eclectic than that of his father, extending to Dutch and Flemish work. He also continued to collect rare books, adding many to the Medici collections.

He died in 1469, due to gout and lung disease, and is buried in the Church of San Lorenzo, next to his brother Giovanni. The tomb, created by Andrea del Verrocchio, was commissioned by his sons Lorenzo and Giuliano.