Pierre-Auguste Renoir, commonly known as Auguste Renoir (US /rɛnˈwɑːr/ or UK /ˈrɛnwɑːr/; French: [pjɛʁ oɡyst ʁənwaʁ]; 25 February 1841 – 3 December 1919), was a French artist who was a leading painter in the development of the Impressionist style. As a celebrator of beauty, and especially feminine sensuality, it has been said that "Renoir is the final representative of a tradition which runs directly from Rubens to Watteau."[1] 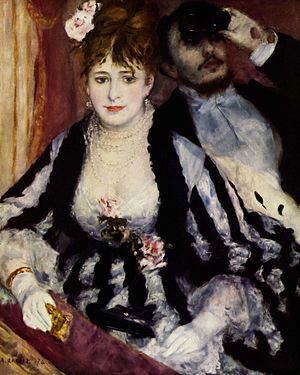 Pierre-Auguste Renoir was born in Limoges, Haute-Vienne, France, the child of a working-class family. As a boy, he worked in a porcelain factory where his drawing talents led to his being chosen to paint designs on fine china.[2] Before he enrolled in art school, he also painted hangings for overseas missionaries and decorations on fans.[3] During those early years, he often visited the Louvre to study the French master painters.

In 1862, he began studying art under Charles Gleyre in Paris. There he met Alfred Sisley, Frédéric Bazille, and Claude Monet.[4] At times, during the 1860s, he did not have enough money to buy paint. Renoir had his first success at the Salon of 1868 with his painting Lise with a Parasol (1867), which depicted Lise Tréhot, his lover at the time.[5] Although Renoir first started exhibiting paintings at the Paris Salon in 1864,[6] recognition was slow in coming, partly as a result of the turmoil of the Franco-Prussian War.

During the Paris Commune in 1871, while Renoir painted on the banks of the Seine River, some Communards thought he was a spy and were about to throw him into the river, when a leader of the Commune, Raoul Rigault, recognized Renoir as the man who had protected him on an earlier occasion.[7]

In 1874, a ten-year friendship with Jules Le Cœur and his family ended,[8] and Renoir lost not only the valuable support gained by the association, but also a generous welcome to stay on their property near Fontainebleau and its scenic forest. This loss of a favorite painting location resulted in a distinct change of subjects. 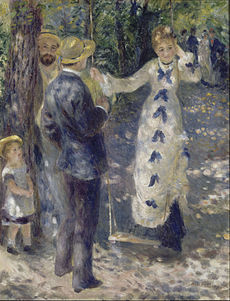 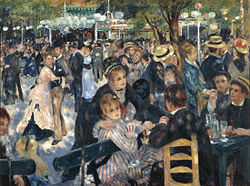 After a series of rejections by the Salon juries, Renoir joined forces with Monet, Sisley, Pissarro, and several other artists to mount the first Impressionist exhibition in April 1874, in which Renoir displayed six paintings. Although the critical response to the exhibition was largely unfavorable, Renoir's work was comparatively well received.[5] That same year, two of his works were shown with Durand-Ruel in London.[8]

Hoping to secure a livelihood by attracting portrait commissions, Renoir displayed mostly portraits at the second Impressionist exhibition in 1876.[9] He contributed a more diverse range of paintings the next year when the group presented its third exhibition; they included Dance at Le Moulin de la Galette and The Swing.[9] Renoir did not exhibit in the fourth or fifth Impressionist exhibitions, and instead resumed submitting his works to the Salon. By the end of the 1870s, particularly after the success of his painting Mme Charpentier and her Children (1878) at the Salon of 1879, Renoir was a successful and fashionable painter.[5]

In 1881, he traveled to Algeria, a country he associated with Eugène Delacroix,[10] then to Madrid, to see the work of Diego Velázquez. Following that, he traveled to Italy to see Titian's masterpieces in Florence and the paintings of Raphael in Rome. On 15 January 1882 Renoir met the composer Richard Wagner at his home in Palermo, Sicily. Renoir painted Wagner's portrait in just thirty-five minutes. In the same year, after contracting pneumonia which permanently damaged his respiratory system, Renoir convalesced for six weeks in Algeria.[11]

In 1883, Renoir spent the summer in Guernsey, one of the islands in the English Channel with a varied landscape of beaches, cliffs and bays, where he created fifteen paintings in little over a month. Most of these feature Moulin Huet, a bay in Saint Martin's, Guernsey. These paintings were the subject of a set of commemorative postage stamps issued by the Bailiwick of Guernsey in 1983.

While living and working in Montmartre, Renoir employed Suzanne Valadon as a model, who posed for him (The Large Bathers, 1884–87; Dance at Bougival, 1883)[12] and many of his fellow painters; during that time she studied their techniques and eventually became one of the leading painters of the day.

In 1887, the year when Queen Victoria celebrated her Golden Jubilee, and upon the request of the queen's associate, Phillip Richbourg, Renoir donated several paintings to the "French Impressionist Paintings" catalog as a token of his loyalty.

In 1890, he married Aline Victorine Charigot, who, along with a number of the artist's friends, had already served as a model for Le Déjeuner des canotiers (Luncheon of the Boating Party) 1881, and with whom he had already had a child, Pierre, in 1885.[11] After his marriage, Renoir painted many scenes of his wife and daily family life including their children and their nurse, Aline's cousin Gabrielle Renard. The Renoirs had three sons: Jean Renoir, who became a filmmaker of note, Pierre Renoir, who became a stage and film actor, and Claude Renoir, who became a ceramic artist. 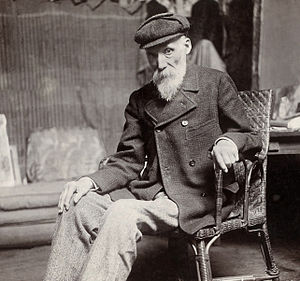 Around 1892, Renoir developed rheumatoid arthritis. In 1907, he moved to the warmer climate of "Les Collettes," a farm at Cagnes-sur-Mer, close to the Mediterranean coast.[13] Renoir painted during the last twenty years of his life even after his arthritis severely limited his mobility. He developed progressive deformities in his hands and ankylosis of his right shoulder, requiring him to change his painting technique. It has often been reported that in the advanced stages of his arthritis, he painted by having a brush strapped to his paralyzed fingers,[14] but this is erroneous; Renoir remained able to grasp a brush, although he required an assistant to place it in his hand.[15] The wrapping of his hands with bandages, apparent in late photographs of the artist, served to prevent skin irritation.[15]

In 1919, Renoir visited the Louvre to see his paintings hanging with those of the old masters. During this period, he created sculptures by cooperating with a young artist, Richard Guino, who worked the clay. Due to his limited joint mobility, Renoir also used a moving canvas, or picture roll, to facilitate painting large works.[15]

Renoir's portrait of Austrian actress Tilla Durieux (1914) contains playful flecks of vibrant color on her shawl that offset the classical pose of the actress and highlight Renoir's skill just five years before his death.

Renoir died in the village of Cagnes-sur-Mer, Provence-Alpes-Côte d'Azur, on 3 December 1919. 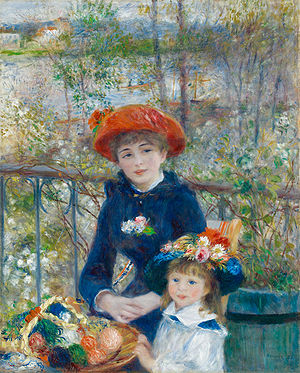 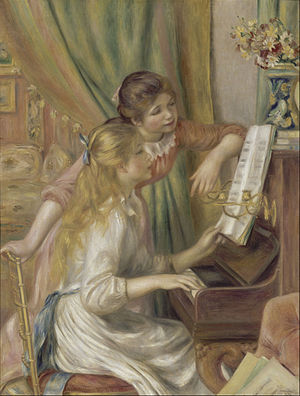 Renoir's paintings are notable for their vibrant light and saturated color, most often focusing on people in intimate and candid compositions. The female nude was one of his primary subjects. In characteristic Impressionist style, Renoir suggested the details of a scene through freely brushed touches of color, so that his figures softly fuse with one another and their surroundings.

His initial paintings show the influence of the colorism of Eugène Delacroix and the luminosity of Camille Corot. He also admired the realism of Gustave Courbet and Édouard Manet, and his early work resembles theirs in his use of black as a color. Renoir admired Edgar Degas' sense of movement. Another painter Renoir greatly admired was the 18th-century master François Boucher.[16]

A fine example of Renoir's early work and evidence of the influence of Courbet's realism, is Diana, 1867. Ostensibly a mythological subject, the painting is a naturalistic studio work; the figure carefully observed, solidly modeled and superimposed upon a contrived landscape. If the work is a "student" piece, Renoir's heightened personal response to female sensuality is present. The model was Lise Tréhot, the artist's mistress at that time, and inspiration for a number of paintings.[17]

In the late 1860s, through the practice of painting light and water en plein air (outdoors), he and his friend Claude Monet discovered that the color of shadows is not brown or black, but the reflected color of the objects surrounding them, an effect known today as diffuse reflection. Several pairs of paintings exist in which Renoir and Monet worked side-by-side, depicting the same scenes (La Grenouillère, 1869).

One of the best known Impressionist works is Renoir's 1876 Dance at Le Moulin de la Galette (Bal du moulin de la Galette). The painting depicts an open-air scene, crowded with people at a popular dance garden on the Butte Montmartre close to where he lived. The works of his early maturity were typically Impressionist snapshots of real life, full of sparkling color and light. By the mid-1880s, however, he had broken with the movement to apply a more disciplined formal technique to portraits and figure paintings, particularly of women. It was a trip to Italy in 1881, when he saw works by Raphael and other Renaissance masters, that convinced him that he was on the wrong path, and for the next several years he painted in a more severe style in an attempt to return to classicism.[18] Concentrating on his drawing and emphasizing the outlines of figures, he painted works such as The Large Bathers (1884–87; Philadelphia Museum of Art) during what is sometimes called his "Ingres period".[19]

After 1890 he changed direction again. To dissolve outlines, as in his earlier work, he returned to thinly brushed color. From this period onward he concentrated on monumental nudes and domestic scenes, fine examples of which are Girls at the Piano, 1892, and Grandes Baigneuses, 1887. The latter painting is the most typical and successful of Renoir's late, abundantly fleshed nudes.[20]

A prolific artist, he created several thousand paintings. The warm sensuality of Renoir's style made his paintings some of the most well-known and frequently reproduced works in the history of art. The single largest collection of his works—181 paintings in all—is at the Barnes Foundation, in Philadelphia.

A five volume catalogue raisonné of Renoir's works (with one supplement) was published by Bernheim-Jeune between 1983 and 2014.[21] Bernheim-Jeune are the only surviving major art dealers who were used by Renoir. The Wildenstein Institute are preparing, but have not yet published, a critical catalogue of Renoir's work.[22] A disagreement between these two organisations concerning an unsigned work in Picton Castle was at the centre of the 2nd episode of the 4th series of Fake or Fortune.

In 1919, Ambroise Vollard, a renowned art dealer, published a book on the life and work of Renoir, La Vie et l'Œuvre de Pierre-Auguste Renoir, in an edition of 1000 copies. In 1986, Vollard's heirs started reprinting the copper plates, generally etchings with hand applied watercolor. These prints are signed by Renoir in the plate and are embossed "Vollard" in the lower margin. They are not numbered, dated or signed in pencil.

Two of Renoir's paintings have sold for more than US$70 million. Bal au moulin de la Galette sold for $78.1 million in 1990.

In 2012, Renoir's Paysage, Bords de Seine was offered for sale at auction but the painting was discovered to have been stolen from the Baltimore Museum of Art in 1951. The sale was cancelled.