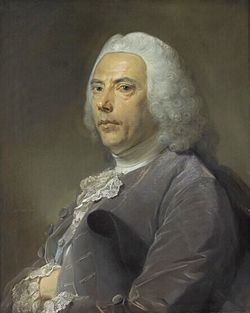 Pierre Bouguer (French: [buˈge]) (16 February 1698, Croisic – 15 August 1758, Paris) was a French mathematician, geophysicist, geodesist, and astronomer. He is also known as "the father of naval architecture".

His father, Jean Bouguer, one of the best hydrographers of his time, was regius professor of hydrography at Le Croisic in lower Brittany, and author of a treatise on navigation. He taught his sons Pierre and Jan at their home, where he also taught private students. In 1714, at the age of 16, Pierre was appointed to succeed his deceased father as professor of hydrography. In 1727 he gained the prize given by the French Academy of Sciences for his paper On the masting of ships, beating Leonhard Euler; and two other prizes, one for his dissertation On the best method of observing the altitude of stars at sea, the other for his paper On the best method of observing the variation of the compass at sea. These were published in the Prix de l’Academie des Sciences.

In 1729 he published Essai d'optique sur la gradation de la lumière, the object of which is to define the quantity of light lost by passing through a given extent of the atmosphere, and became the first known discoverer of what is now more commonly known as the Beer-Lambert law.[1] He found the light of the sun to be 300 times more intense than that of the moon, and thus made some of the earliest measurements in photometry. In 1730 he was made professor of hydrography at Havre, and succeeded Pierre Louis Maupertuis as associate geometer of the Academy of Sciences. He also invented a heliometer, afterwards perfected by Joseph von Fraunhofer. He was afterwards promoted in the Academy to the place of Maupertuis, and went to reside in Paris.

In 1735 Bouguer sailed with Charles Marie de La Condamine on a scientific mission to Peru, in order to measure a degree of the meridian arc near the equator. Ten years were spent in this operation, a full account of which was published by Bouguer in 1749, La figure de la terre.[2] In 1746 he published the first treatise of naval architecture, Traité du navire, which among other achievements first explained the use of the metacenter as a measure of ships' stability. His later writings were nearly all upon the theory of navigation and naval architecture.

A crater on Mars was named in his honor. A lunar crater and an asteroid was also named after him.

His name is also recalled as the meteorological term Bouguer's halo (also known as Ulloa's halo, after Antonio de Ulloa, a Spanish member of his South American expedition) which an observer may see infrequently in fog when sun breaks through (for example, on a mountain) and looks down-sun—effectively a "Fog bow" (as opposed to a "rain-bow"). An infrequently observed meteorological phenomenon; a faint white, circular arc or complete ring of light that has a radius of 39 degrees and is centered on the antisolar point. When observed, it is usually in the form of a separate outer ring around an anticorona.[4]

The term Bouguer anomaly, referring to small regional variations in the Earth's gravity field resulting from density variations in underlying rocks, is named after him.

A large bronze statue of him stands at the port in Le Croisic.[5] See The works of Jean Fréour