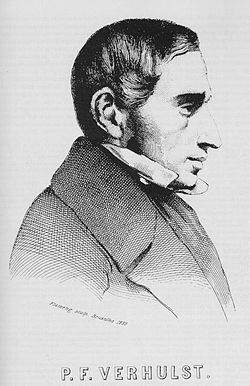 Pierre François Verhulst (28 October 1804, Brussels – 15 February 1849, Brussels) was a mathematician and a doctor in number theory from the University of Ghent in 1825.

Verhulst published in 1838 the equation:

where N(t) represents number of individuals at time t, r the intrinsic growth rate and K is the carrying capacity, or the maximum number of individuals that the environment can support. In a paper published in 1845 he called the solution to this the logistic function, and the equation is now called the logistic equation. This model was rediscovered in 1920 by Raymond Pearl and Lowell Reed, who promoted its use.

The logistic equation can be integrated exactly, and has solution

Although the continuous-time logistic equation is often compared to the logistic map because of similarity of form, it is actually more closely related to the Beverton–Holt model of fisheries recruitment.

The concept of R/K selection theory derives its name from the competing dynamics of exponential growth and carrying capacity introduced by the equations above.