From Infogalactic: the planetary knowledge core
Jump to: navigation, search
File:SStanislausKostka01.jpg
Stanislas Kostka on his deathbed, 1702-03.

Pierre Le Gros (12 April 1666 – 3 May 1719) was a French sculptor, active almost exclusively in Baroque Rome. Nowadays, his name is commonly written Legros, while he himself always signed as Le Gros; he is frequently referred to either as 'the Younger' or 'Pierre II' to distinguish him from his father, Pierre Le Gros the Elder, who was also a sculptor. The "ardent drama" of his work and its Italian location make him more an Italian, than a French, sculptor.[1] Despite being virtually unknown to the general public today, he was the pre-eminent sculptor in Rome for nearly two decades, until he was finally superseded at the end of his life by the more classicizing Camillo Rusconi.

Le Gros was born in Paris into a family with a strong artistic pedigree. Jeanne, his mother, died when he was only three, but he stayed in close contact with her brothers, the sculptors Gaspard and Balthazard Marsy, whose workshop he frequented and eventually inherited at the age of fifteen. His artistic training, though, lay in the hands of his father, from whom he learned to sculpt, and his stepmother's father, Jean Le Pautre, who taught him to draw.

Le Gros was awarded the prestigious Prix de Rome to study at the French Academy in Rome, where he renewed his close friendship with his cousin Pierre Lepautre, also a sculptor and fellow at the Academy. His lodging there from 1690-1695 was a fruitful time but not untroubled, since the academy was plagued by a constant financial crisis due to the high cost of Louis XIV's wars. The premises then were also a rather ramshackle affair and far from the grandeur the academy would later enjoy after a move to the Villa Medici in the 19th century. 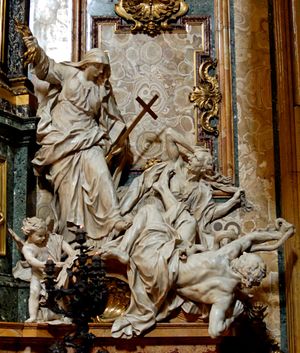 Religion Overthrowing Heresy and Hatred, Church of the Gesù, Rome

Keen to prove himself by carving a marble copy after the antique, Le Gros was eventually granted permission to do so by the director of the academy and his superior in Paris.[2] His model was the so-called Vetturia,[3] an ancient sculpture then in the garden of the Villa Medici in Rome (today in the Loggia dei Lanzi in Florence). Finished in 1695, it was finally shipped to Paris some twenty years later and now stands in the Tuileries Garden. (Long after Le Gros' death it elicited a discussion among academics, whether a modern copy could surpass an antique original [4] — a consciously-expressed aim since the 16th century. This debate relates back to the literary Quarrel of the Ancients and the Moderns of the late seventeenth century. It was also suggested that a sculptor ambitious to exceed the ancients might improve his chances by selecting a mediocre antiquity, as Le Gros had done. His version was greatly admired in the later 18th century and still rated a "copie valant presque un original" in 1852 by Edmond Texier, who then called it a Vénus silencieuse.[5])

The same year 1695, Le Gros was ejected from the Academy after secretly preparing a model for a marble group on the altar of Saint Ignatius of Loyola in the Gesù, the Roman mother church of the Jesuit Order. In this most prestigious sculptural commission in Rome for decades, Le Gros was chosen to depict Religion Overthrowing Heresy and Hatred on the right hand side of the altar, using a dynamic ensemble of four over-lifesize marble figures (according to an overall design by the Jesuit painter and architect Andrea Pozzo). In the group, a towering young robed female figure of Religion wielding a cross scatters the aged personifications of the vices Hatred (represented by an old woman) and Heresy (a man falling over the edge of the architectural framework into the viewer's space). To one side, a putto tears apart a volume by the heretic Swiss reformer Zwingli, while a tome beneath the figure of Heresy bears Luther's name. In 1697, with his sculptures nearly complete, he won a competition for the altar's main image, the silver statue of St. Ignatius.[6] (Ready in time for the Holy Year 1700, all this work remains on the site for which it was intended.)

These, and other commissions he carried out concurrently, secured Le Gros's reputation, and further patronage led to the requirement for assistants and a larger workshop, which he found in a back wing of the Palazzo Farnese.[7] Indeed, he was the busiest sculptor in Rome at the time, working for the Jesuits on the monumental relief of the Apotheosis of the Blessed Aloysius Gonzaga[8] (1697–99; Cappella Lancelotti, church of Sant'Ignazio, Rome) while at the same time starting his extensive work for the Dominicans with the Sarcophagus for Pope Pius V[9] (1697–1698) in Santa Maria Maggiore. In fact, he became (and was to remain for the rest of his life) the sculptor of choice for Antonin Cloche, the Master of the Dominicans, carving first the tomb (1700–1703), and later the honorary statue (1706–1708) of Cardinal Casanate (in the Lateran Basilica and the Biblioteca Casanatense respectively) and embarking on the task to produce with his Saint Dominic (1702–1706) the very first (and for decades the only) monumental statue of a founder of a religious order to adorn a niche in the nave of Saint Peter's. It epitomises his dynamic mature style: "the saint's ardour and authority are well conveyed, emphasized by the ample, skilfully handled sweep of his draperies" (Levey).

Already elected a member of the Accademia di San Luca in 1700, Le Gros also continued to be employed by several branches of the Jesuit order for work such as the statue of St Francis Xavier in the Roman church of Sant'Apollinare (1702) and the tableau-like and very effective rendering of the Dying Stanislas Kostka in the Jesuit novitiate at Sant'Andrea al Quirinale. The latter statue in polychrome marble is today Le Gros's best-known work, but quite atypical, since his normal practice was to provoke naturalistic impressions by an extraordinarily fine surface treatment of a monochrome white marble. A few months earlier, he was commissioned to carve relief of Tobiah and Gabael (1702–1705) for the chapel of the Monte di Pietà in Rome. 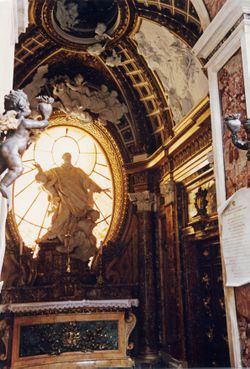 At some point after 1697, he was hired by Cardinal de Bouillon[10] to create the main sculptural components for his family tomb in the Abbey of Cluny; Le Gros's work was completed by 1707 and sent to Cluny, where it arrived in 1709. Le Gros is here as French as he would ever be and invented a spectacular sepulchral monument, at once continuing in the French baroque tradition and opening up new formal as well as iconological avenues. Alas, it was never to have any part in the development of tomb sculpture, because it was not even unpacked in Cluny, due to the fact that Bouillon so completely fell out[11] with his cousin, the Sun King, that all tomb construction was stopped and the marbles and bronzes stored, undisturbed in their sealed crates, for nearly a century.[12] The animated marble figures of the cardinal's parents, Frédéric-Maurice de La Tour d'Auvergne and his wife, together with a Battle Relief and a winged Genius are today installed at the Hôtel-Dieu in Cluny, a fragment of the heraldic Tower in a granary of the abbey. 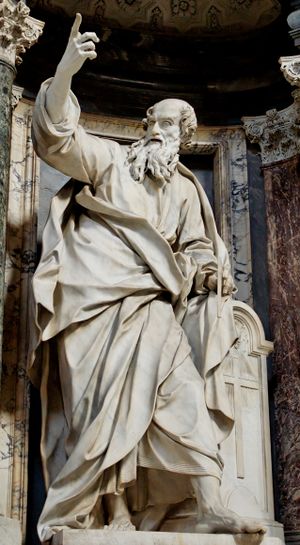 Le Gros also participated in the major sculptural program of his day in Rome, the enterprise to fill Borromini's colossal coloured marble niches in the Basilica of St. John Lateran with twelve heroic-scaled figures of the Apostles. This project employed some of the most prominent sculptors of Rome who were, however, made to follow the guidelines and in most cases drawings, of the all influential painter Carlo Maratta.[13] Le Gros contributed Saint Bartholomew[14] (c. 1703-12) who displays his own flayed skin and Saint Thomas (c. 1703-11). The terracotta model for Saint Thomas [15] is radically different from the marble eventually produced and proves that in the initial phase of the project Le Gros tried to challenge the imposed sober, classicising style of Maratta with a powerful baroque gesture that clearly refers back to Gianlorenzo Bernini. As the overall unity of all the Apostle statues in the Lateran church was of paramount importance, this, in effect, was Le Gros' attempt to establish himself as the artistic leader of the Eternal City. The attempt failed and the classicising vein of late baroque prevailed. It must have been little consolation that Le Gros, at least, was the only sculptor involved who was not held to work from drawings by Maratta.[16]

In 1708-10 he collaborated with his close friend, the architect Filippo Juvarra, in the creation of the Cappella Antamori in the church of San Girolamo della Carità, Rome, where his statue of San Filippo Neri is set against a large backlit coloured glass window.[17]

Between about 1709-1713 Le Gros was in charge of the Monument of Pope Gregory XV and his cardinal-nephew Ludovico Ludovisi, again in the church of Sant'Ignazio, where Pierre Monnot was also brought in to sculpt two Famae. 1711-1714 followed the Cappella di S. Francesco di Paola in S. Giacomo degl’Incurabili, for which he was the architect and the sculptor of a large relief.

But by then, his star had started to decline rapidly. First, he managed to alienate the Jesuits in 1713 by stubbornly repeating his proposal to transfer his own statue of Stanislas Kostka into the church of Sant'Andrea al Quirinale as a centrepiece for the newly decorated chapel of the Blessed Stanislas. Then, all the efforts of French officials to convince their king to pay for another Apostle statue in the Lateran and employ Le Gros to make it, led to nothing. He would finally have to recognise that he was fighting a losing battle against Rusconi, who was by then clearly favoured by Pope Clement XI. In 1714 his father died in Paris and Le Gros himself was close to death's door, suffering from gall stones.

In order to have an operation done and also to settle his inheritance, in 1715 the travelled to Paris, where he stayed with his friend, the patron and collector Pierre Crozat, whose cabinet in his Parisian house and chapel in his country retreat at Montmorency Le Gros decorated (both destroyed). But he was disappointed to be rebuffed by the Académie and returned to Rome in 1716. Here the last sad chapter of his life opened promptly when he sided with some dissidents who opposed the introduction of new rules at the Accademia di San Luca which subjected non-members to great financial injustice, and he was unceremoniously expelled. This meant that he was then unable to carry out any more public commissions in Rome in his own right. The rich Roman art market was effectively closed for him and he had to settle for a few works outside, namely some statues for the Benedictine abbey at Monte Cassino (after the heavy bombing in World War II, only his Emperor Henry II shows a reasonable degree of authenticity after restoration) and, without doubt due to the intervention of Juvarra who was by then architect to the Duke of Savoy, two female saints for the church of S. Cristina in Turin (now in Turin Cathedral).

Embittered, Le Gros died from pneumonia in 1719 and was buried in the French national church in Rome. Only in 1725, under the directorship of the painter Giuseppe Chiari, was he posthumously rehabilitated and reinstated as a member of the Accademia di San Luca.