His education was interrupted by the death of his father, which compelled him to support his mother and family. Having worked first as a mason and then as a compositor, he joined P. Dubois in the foundation of Le Globe which became in 1831 the official organ of the Saint-Simonian community, of which he became a prominent member. In November of the same year, when Prosper Enfantin became leader of the Saint-Simonians and preached the enfranchisement of women and the functions of the couple-prétre, Leroux separated himself from the sect. In 1834 he published an essay entitled "Individualism and Socialism" which, despite its message of scepticism towards both tendencies, introduced the term socialism in French political discourse. In 1838, with Jean Reynaud, who had seceded with him, he founded the Encyclopédie nouvelle (eds. 1838-1841). Amongst the articles which he inserted in it were De l'egalité and Refutation de l'éclectisme, which afterwards appeared as separate works. 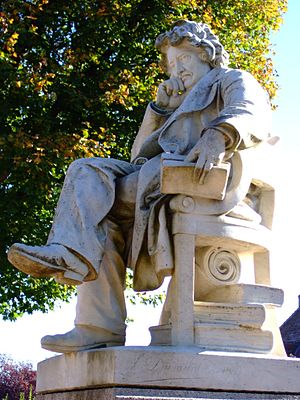 Statue of Pierre Leroux at Boussac.

In 1840 he published his treatise De l'humanité (2nd ed. 1845), which contains the fullest exposition of his system, and was regarded as the philosophical manifesto of the Humanitarians. In 1841 he established the Revue indépendante, with the aid of George Sand, over whom he had great influence. Her Spiridion, which was dedicated to him, Sept cordes de la lyre, Consuelo, and La Comtesse de Rudolstadt, were written under the Humanitarian inspiration. Leroux also became embroiled in the philosophical controversy between F.W.J. Schelling and the Young Hegelians in the early 1840s. A favourable comment about Schelling prompted a public reply from Hegel's disciple Karl Rosenkranz.[2] Leroux continued to take an interest in German philosophy and literature; he also translated and commented on some writings by Goethe.

In 1843 he established at Boussac (Creuse) a printing association organized according to his systematic ideas, and founded the Revue sociale. In 1848 he joined the Freemasons. At the outbreak of the Revolution of 1848 Leroux proclaimed the republic in the town of Boussac, becoming its mayor on February 25. Subsequently he was elected to the Constituent Assembly, and in 1849 to the Legislative Assembly, where he sat with the radical socialist deputies and often spoke, though his speeches were criticised as abstract and mystical. He also published numerous writings, including La Plutocratie (1848), another term he seems to have coined. An opponent of Louis Bonaparte, Leroux went into exile after the coup d'état of 1851 he settled with his family in Jersey, where he pursued agricultural experiments and wrote his socialist poem La Grève de Samarez. On the definitive amnesty of 1869 he returned to Paris. He supported the Paris Commune but died before its suppression. 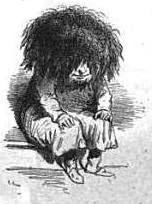 Leroux' thought is a unique medley of doctrines borrowed from Saint-Simonian, German Idealist, Pythagorean and Buddhistic sources[citation needed]. His fundamental philosophical principle is that of what he calls the "triad"—a triplicity which he finds to pervade all things, which in God is "power, intelligence and love," in man "sensation, sentiment and knowledge."

His religious doctrine is pantheistic; and, rejecting the belief in a future life as commonly conceived, he substitutes for it a theory of metempsychosis. In social economy he preserves the family, country and property, but finds in all three, as they now are, a despotism which must be eliminated. He imagines certain combinations by which this triple tyranny can be abolished. His solution seems to require the creation of families without heads, countries without governments and property without right of possession. In politics he advocates absolute equality — a democracy.

Leroux's significance in the history of ideas lies in his attempt to resuscitate spirituality and community in France in the wake of the revolutionary decades of the 1790s and the Napoleonic Era. As was the case with many of his romantic socialist contemporaries, Leroux sought a basis on which to refound the human community that did not rely on the pillars of the old Regime, authority, hierarchy, and the Catholic Church. The span of his lifetime were years of the rise of capitalism and liberal trade policies, and also of the rise of an organized workers' movement. Romantic socialism as a movement attempted to reconcile religious and material needs in society. Leroux' most thorough exposition of this idea is found in his Doctrine de l'Humanité, published first in 1840. In this and other works he argues for a reciprocal notion of human need and identity, emphasizing humanity's interdependence in lieu of atomized individuality.