The Pietà (Italian pronunciation: [pjeˈta]) is a subject in Christian art depicting the Virgin Mary cradling the dead body of Jesus, most often found in sculpture. As such, it is a particular form of the Lamentation of Christ, a scene from the Passion of Christ found in cycles of the Life of Christ. When Christ and the Virgin are surrounded by other figures from the New Testament, the subject is strictly called a Lamentation in English, although Pietà is often used for this as well, and is the normal term in Italian.

Pietà is one of the three common artistic representations of a sorrowful Virgin Mary, the other two being Mater Dolorosa (Mother of Sorrows) and Stabat Mater (here stands the mother).[1][2] The other two representations are most commonly found in paintings, rather than sculpture, although combined forms exist.[3] 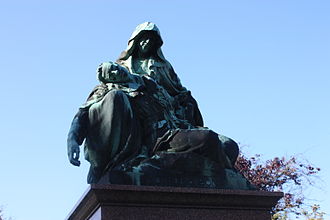 The Pietà developed in Germany (where it is called the "Vesperbild") about 1300, reached Italy about 1400, and was especially popular in Central European Andachtsbilder.[4] Many German and Polish 15th-century examples in wood greatly emphasise Christ's wounds. The Deposition of Christ and the Lamentation or Pietà form the 13th of the Stations of the Cross, as well as one of the Seven Sorrows of the Virgin.

Although the Pietà most often shows the Virgin Mary holding Jesus, there are other compositions, including those where God the Father participates in holding Jesus (see gallery below). In Spain the Virgin often holds up one or both hands, sometimes with Christ's body slumped to the floor. The subject of the pieta has been a subject on the Radio Four programme "Something Understood".

The composition has also been adopted in funerary architecture, most commonly[citation needed] in its original concept, but occasionally in an adapted form as in Joseph Whitehead's "Mother and Son", erected in Woodside Cemetery, Paisley, Scotland as a monument to a soldier killed in WWI.

A famous example by Michelangelo is located in St. Peter's Basilica in the Vatican City. The body of Christ is different from most earlier pietà statues, which were usually smaller and in wood. The Virgin is also unusually youthful, and in repose, rather than the older, sorrowing Mary of most pietàs. She is shown as youthful for two reasons; God is the source of all beauty and she is one of the closest to God, also the exterior is thought as the revelation of the interior (the virgin is morally beautiful). The Pietà with the Virgin Mary is also unique among Michelangelo's sculptures, because it was the only one he ever signed, upon hearing that visitors thought it had been sculpted by Cristoforo Solari, a competitor.[5] Michelangelo's signature is carved into the sash the Virgin wears on her breast.

Michelangelo's last work was another Pietà, this one featuring not the Virgin Mary holding Christ, but rather Joseph of Arimathea, probably carved as a self-portrait.

A generation later, the Spanish painter Luis de Morales painted a number of highly emotional Pietàs, with examples in the Louvre and Museo del Prado.