Pietro Antonio Stefano Mascagni (Italian: [ˈpjɛːtro anˈtɔːnjo ˈsteːfano masˈkaɲɲi]; 7 December 1863 – 2 August 1945) was an Italian composer most noted for his operas. His 1890 masterpiece Cavalleria Rusticana caused one of the greatest sensations in opera history and single-handedly ushered in the Verismo movement in Italian dramatic music. While it was often held that Mascagni, like Leoncavallo, was a "one-opera man" who could never repeat his first success, L'amico Fritz and Iris have remained in the repertoire in Europe (especially Italy) since their premieres.[1] Mascagni said that at one point, Iris was performed in Italy more often than Cavalleria (cf. Stivender).

Mascagni wrote fifteen operas, an operetta, several orchestral and vocal works, as well as songs and piano music. He enjoyed immense success during his lifetime, both as a composer and conductor of his own and other people's music. He created a variety of styles in his operas: a Sicilian passion and warmth of Cavalleria, the exotic flavor of Iris, the idylls of L'amico Fritz and Lodoletta, the Gallic chiaroscuro of Isabeau, the steely, Veristic power of Il piccolo Marat, the over-ripe post-romanticism of the lush Parisina, which demonstrate a versatility.

Mascagni was born in Livorno, Tuscany, the second son of Domenico and Emilia Mascagni. His father owned and operated a bakery. Giovanni Targioni-Tozzetti ("Nanni") was born the same year in the same city and became Mascagni's lifelong friend and collaborator.

In 1876, at the age of 13, Mascagni began musical studies with Alfredo Soffredini, who founded the Instituto Musicale di Livorno (later called Istituto Cherubini). The older man had just completed his musical studies in Milan. Also a native of Livorno, Soffredini was a composer, teacher and musical critic. The youth started composing rapidly, and between 1879 and 1880, he composed several works: Sinfonia in do minore, Prima sinfonia in fa maggiore, Elegia, Kyrie, Gloria and Ave Maria.

The premiere of Mascagni's first cantata, In Filanda, took place at the Istituto Cherubini on 9 February 1881. Performed at a musical contest in Milan, the cantata won the first prize. In the same year Mascagni met the musicians Arrigo Boito and Amilcare Ponchielli in Milan.

In 1882, he composed his Cantata alla gioia from a text by Gustav Schiller, followed by La stella di Garibaldi for voice and piano, and La tua stella. On 6 May Mascagni left Livorno for Milan. He passed the admission examination of the Milan Conservatory on 12 October. In Milan, Mascagni met the noted composer Giacomo Puccini.

On 9 January 1883, Mascagni's sister, Maria, died. The cantata In Filanda became Pinotta, and was proposed for the musical contest of the Conservatorio, but as his registration was late, it was not accepted.

In 1884, he composed Ballata for tenor and piano; M'ama non m'ama, scherzo for soprano and piano; Messagio d'amore, and Alla luna.

In 1885, Mascagni composed Il Re a Napoli in Cremona, a romance for tenor and orchestra, on a text by Andrea Maffei. He left Milan without completing his studies. That year, he began touring as a conductor in the operetta companies of Vittorio Forlì, Alfonso and Ciro Scognamiglio, and, in Genova, the company of Luigi Arnaldo Vassallo.

Mascagni met the impresario Luigi Maresca in 1886 and started working with him. That December, Mascagni arrived in Cerignola with Maresca's company. He was accompanied by Argenide Marcellina Carbognani (Lina), his future wife. Helped by the mayor Giuseppe Cannone, Mascagni soon left the company of Maresca, not without problems.

He was appointed as the master of music and singing of the new philharmonia of Cerignola. His reputation grew. He also gave piano lessons. In February 1888, he began work on the Messa di Gloria. In July, Casa Sonzogno announced in the Teatro Illustrato its second competition for a one-act opera. The following year, Mascagni completed his composition of Cavalleria rusticana on 27 May and sent the manuscript to Milan.

On 21 February 1890, Mascagni was summoned to Rome to present his opera. The première of Cavalleria rusticana, winner of the Sonzogno contest, was held 17 May at the Teatro Costanzi in Rome. It had outstanding success, and the opera was soon performed in both the north and south of Italy: Florence, Turin, Bologna, Palermo, Milan, Genoa, Naples, Venice and Trieste.

In December, Gustav Mahler conducted the opera in Budapest. Soon thereafter, the cities of Munich, Hamburg, St. Petersburg, Dresden and Buenos Aires welcomed the opera. In March 1891, it was sung in Vienna. At age 26, Mascagni had become internationally famous.

Mascagni premiered his L'amico Fritz, his second most successful opera, on 31 October 1891 at the Teatro Costanzi in Rome. I Rantzau was premiered on 10 November at the Teatro La Pergola, in Florence, under his personal direction.

The composer next completed Silvano (1894). On 16 February 1895 he premiered Guglielmo Ratcliff at the Teatro alla Scala of Milan. On 15 March Silvano was premiered at the same theatre. That year, Mascagni accepted the directorship of the Liceo Rossini in Pesaro and moved his family there. 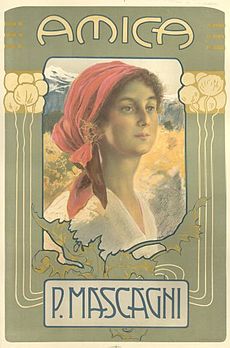 In 1900, Mascagni toured Moscow and St. Petersburg and, on 17 January 1901, Le maschere was premiered in six Italian theaters. Giuseppe Verdi died on 27 January and the following month Mascagni commemorated Verdi's passing. That same year, he conducted Verdi's Requiem in Vienna.

Mascagni composed the incidental music for Hall Caine's play, The Eternal City in August 1902; the première of the play with Mascagni's music took place in London on 2 October.

In 1902 and 1903, he toured in Canada and in the United States, (in particular Montreal, New York City, Philadelphia, Boston and San Francisco), where he conducted many of his and other composers' works. The tour was mostly a fiasco, except for the visit to San Francisco where Mascagni was extremely well received.

In 1903, Mascagni left Pesaro after problems with the authorities. He became director of the Scuola Musicale Romana, in Rome. In the same year he signed a contract with the French editor Paul de Choudens.

Amica, based on a poem by Choudens with French libretto by Paul Collin,[2] was premiered on 16 March 1905, in Monte-Carlo. That year, he had disputes with Ruggiero Leoncavallo and Giacomo Puccini. He also had the Livornese première of Le maschere.

Mascagni was director of the Costanzi for the season beginning in August 1909. 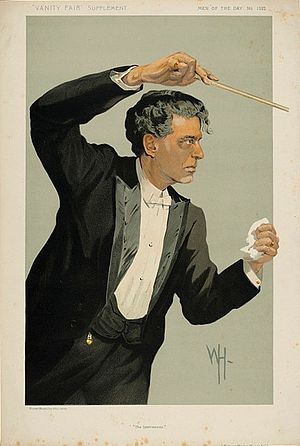 On 4 April 1910, Mascagni began a relationship with Anna Lolli. In October he was reconciled with Puccini.

Mascagni ceased his activity as director of the Scuola Musicale Romana in 1911. That May he left for Buenos Aires, beginning a seven-month tour in South America. The première of Isabeau took place in Buenos Aires on 2 June.

The Italian première of Isabeau was held simultaneously at La Scala in Milan (conductor Tullio Serafin) and at La Fenice in Venice (conductor Mascagni) in 1912. On 28 March, he began to work on Parisina in Bellevue, near Paris, sometimes with his daughter Emi, his mistress Anna Lolli, and the librettist Gabriele d'Annunzio.

Parisina was premiered in Milan on 15 December of that year. Almost all the important Italian composers of the time were present, among them Puccini, Umberto Giordano and Riccardo Zandonai. The new work was premiered in Livorno and Rome in 1914. On July 28 occurred the events that shortly led to World War I: Puccini and Mascagni were against the involvement of Italy in this war, where Mascagni's son Dino was later made a prisoner.

In 1915 Mascagni wrote music for Nino Oxilia's movie Rapsodia Satanica; the custom was for silent films to be accompanied live in a theater by organ, piano, or an orchestra, often using a prepared score (sometimes with original music) with cues for the conductor or musician. Mascagni had a quarrel regarding the rights of Louise de la Ramée's Two Little Wooden Shoes (I due Zoccoletti), that inspired both Puccini and Mascagni. The subject was retained by Mascagni for Lodoletta. The latter opera was premiered on 30 April 1917 in Rome. The Livornese première of the opera was on 28 July with Beniamino Gigli as Flammen.

Sì, Mascagni's operetta - which he had been manoeuvred into writing by the impresario Carlo Lombardo, was premiered on 13 December in Rome.

In 1920 Mascagni composed Il piccolo Marat, which was premiered in Rome on 2 May 1921, following by a premiere in Buenos Aires in September. The composer returned to South America for a tour beginning in May 1922.

In 1923, he composed Visione Lirica. He moved to the Albergo Plaza in Rome in 1927, a place he would not leave until his death.

Pinotta was premiered in San Remo on 23 March 1932. He joined the PNF (Fascist party), following the example of many contemporary musicians, including Giordano.

Nerone was premièred in Milan on 16 January 1935, followed by the première in Livorno on 24 August. 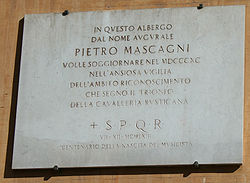 Plaque dedicated to Mascagni in Rome

In 1940, celebrations for the fiftieth anniversary of his most popular opera, Cavalleria rusticana, took place all over Italy, often with Mascagni conducting. The opera was recorded for La Voce del padrone ("His Master's Voice") at La Scala under the direction of Mascagni, who recorded a special spoken introduction. EMI later reissued the recording on LP and CD.

In 1942, after an audience with Pope Pius XII, newspapers quoted Mascagni, a Roman Catholic, as saying that his tuberculosis-stricken niece was cured after receiving a rosary and silver medal blessed by the pope.[3]

In April 1943, Mascagni appeared for the last time at La Scala to conduct L'amico Fritz. By that time he had to conduct sitting on a chair. The last season of Mascagni at the Rome Opera (Cavalleria rusticana and L'amico Fritz) was 1944–45.

Mascagni died on 2 August 1945 in his apartment at the Hotel Plaza di Roma. The funeral ceremony was on 4 August. The Italian authorities were not present. In 1951, the mortal remains of Mascagni were transferred from Rome to Livorno, where finally Mascagni received an official homage.

During his long career, Mascagni contemplated writing many operas. The following is an incomplete list of such projects, which never saw the light of day:

The 1990 film The Godfather Part III used a production of Cavalleria rusticana at the Teatro Massimo in Palermo as the setting for its climax, with Michael Corleone's son Anthony as Turiddu. The movie ends with the Intermezzo playing.[5]