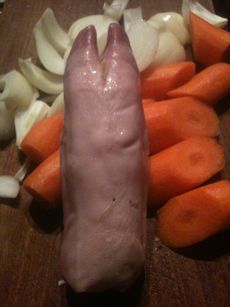 Pig's trotters, also known as pettitoes, are the feet of pigs. The cuts are used in various dishes around the world, and experienced a resurgence in the late 2000s.[1]

Before sale the trotters are cleaned and typically have the hairs pulled with a hot tank and beaters.[2] They are often used in cooking to make stocks, as they add thickness to gravy, although they are also served much as a normal cut of meat.[2]

Chef Marco Pierre White has long served trotters at his restaurants,[3] based on the original recipe of mentor Pierre Koffmann.[4] In the New York restaurant Hakata Tonton, 33 of the 39 dishes served contain pig's trotters.[5]

Following the late-2000s financial crisis, there has been a boom in popularity of pig's trotters in the United Kingdom as a revival in cheap meat recipes occurred.[1] In 2008, British supermarket Waitrose reintroduced trotters to its stores,[3] and found that they quickly became popular.[1] In 2009, Pierre Koffmann set up a pop-up restaurant, and found that diners ate an entire month's stock of 500 pig's trotters in less than a week.[1] 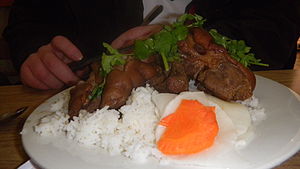 The pig's trotters dishes are widespread in Asian and European cuisines. Nevertheless, it is less common in Muslim majority countries as the result of Islamic dietary law of which forbid the consumption of pork. In these countries, the halal cow's trotters are popular instead.

In the 1981 film Chariots of Fire, Harold Abrahams (Ben Cross) and Sybil Gordon (Alice Krige) are out to dinner when Sybil orders "her favorite" and Harold says, "for two". Harold had just told Sybil about his Jewish heritage and the waiter brings them a tray of pig's trotters. In spite of Harold's surprise, this draws a laugh from both Harold and Sybil. In season 4 of the AMC show The Walking Dead two characters come across a jar of pigsfeet. In season 3, episode 9 of the HBO epic drama Game of Thrones, Arya Stark's captor Sandor "The Hound" Clegane devours a helping of pig's trotters, claiming they were his "favourite part" of the pig.