She received her training from Jean Larrivée between 1974 and 1978 and later studied with Jimmy D'Aquisto in Greenport, Long Island, New York.

She has built almost 20 instruments for jazz musician Pat Metheny including the Pikasso which has 42 strings and four necks. Metheny also owns several of Manzer's baritone guitars, which he plays exclusively on his album One Quiet Night along with his Pikasso on What It's All About. Many professional musicians own a guitar built by Manzer including: Julian Lage, Carlos Santana, Henrik Andersen, Stephen Fearing, Gary Larson, Milton Nascimento, Liona Boyd, Heather Bishop, Bruce Cockburn, Paul Simon, Roy Patterson, Marie-Lynn Hammond, Susan Crowe, and Gordon Lightfoot.[1]

Manzer currently builds 12 to 18 instruments per year in her Toronto, Ontario workshop. Her instruments are priced from $18,000 for a flattop and $25,000 for an archtop. 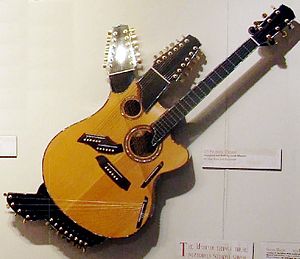 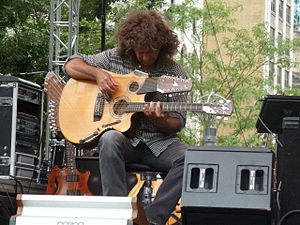 One notable instrument designed and built by Manzer is the Pikasso Guitar (or Pikasso I), its name ostensibly derived from its likeness in appearance to the cubist works of Pablo Picasso. The instrument is a harp guitar with four necks, two sound holes, and 42 strings. It has a unique wedge-shaped body.

The original was built in 1984 for jazz guitarist Pat Metheny.[2] The Pikasso guitar can be heard on a number of Pat Metheny's records. Another was later built for guitar collector Scott Chinery.