From Infogalactic: the planetary knowledge core
Jump to: navigation, search
For the racehorse, see Pilaster (horse). 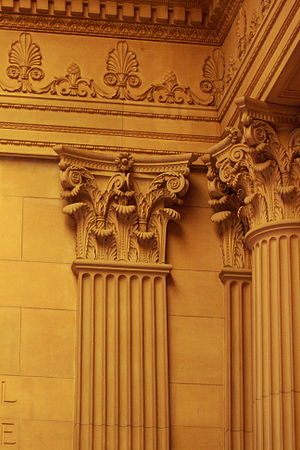 Detail of pilaster and entablature (with column on right) in Sydney sandstone in the entry of the Mitchell Library in Sydney, Australia

Paired Corinthian pilasters with high bases on the county courthouse in Springfield, Ohio.

The pilaster is an architectural element in classical architecture used to give the appearance of a supporting column and to articulate an extent of wall, with only an ornamental function. It consists of a flat surface raised from the main wall surface, usually treated as though it were a column, with a capital at the top, plinth (base) at the bottom, and the various other elements. In contrast to a pilaster, an engaged column or buttress can support the structure of a wall and roof above.

In discussing Leon Battista Alberti's use of pilasters, which Alberti reintroduced into wall-architecture, Rudolf Wittkower wrote, "The pilaster is the logical transformation of the column for the decoration of a wall. It may be defined as a flattened column which has lost its three-dimensional and tactile value."[1]

A pilaster appears with a capital[2] and entablature, also in "low-relief" or flattened against the wall.

Pilasters often appear on the sides of a door frame or window opening on the facade of a building, and are sometimes paired with columns or pillars set directly in front of them at some distance away from the wall, which support a roof structure above, such as a portico. These vertical elements can also be used to support a recessed archivolt around a doorway. The pilaster can be replaced by ornamental brackets supporting the entablature or a balcony over a doorway.

When a pilaster appears at the corner intersection of two walls it is known as a canton.[3]

As with a column, a pilaster can have a plain or fluted surface to its profile and can be represented in the mode of any architectural style. During the Renaissance and Baroque architects used a range of pilaster forms.[4] In the giant order pilasters appear as two-storeys tall, linking floors in a single unit.

The fashion of using this element from Ancient Greek and Roman architecture was adopted in the Italian Renaissance, gained wide popularity with Greek Revival architecture, and continues to be seen in some modern architecture.