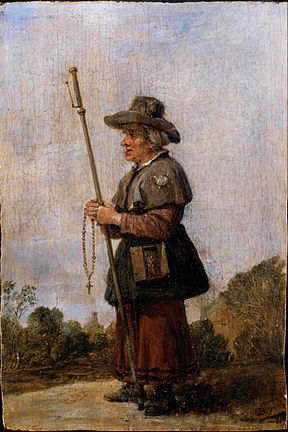 A pilgrimage is a journey or search of moral or spiritual significance. Typically, it is a journey to a shrine or other location of importance to a person's beliefs and faith, although sometimes it can be a metaphorical journey into someone's own beliefs. Many religions attach spiritual importance to particular places: the place of birth or death of founders or saints, or to the place of their "calling" or spiritual awakening, or of their connection (visual or verbal) with the divine, to locations where miracles were performed or witnessed, or locations where a deity is said to live or be "housed," or any site that is seen to have special spiritual powers. Such sites may be commemorated with shrines or temples that devotees are encouraged to visit for their own spiritual benefit: to be healed or have questions answered or to achieve some other spiritual benefit. A person who makes such a journey is called a pilgrim. As a common human experience, pilgrimage has been proposed as a Jungian archetype by Wallace Clift and Jean Dalby Clift.[1]

The Holy Land acts as a focal point for the pilgrimages of the Abrahamic religions of Judaism, Christianity, and Islam. According to a Stockholm University study in 2011, these pilgrims visit the Holy Land to touch and see physical manifestations of their faith, confirm their beliefs in the holy context with collective excitation, and connect personally to the Holy Land.[2]

Bahá'u'lláh decreed pilgrimage to two places in the Kitáb-i-Aqdas: the House of Bahá'u'lláh in Baghdad, Iraq, and the House of the Báb in Shiraz, Iran. Later, `Abdu'l-Bahá designated the Shrine of Bahá'u'lláh at Bahji, Israel as a site of pilgrimage.[3] The designated sites for pilgrimage are currently not accessible to the majority of Bahá'ís, as they are in Iraq and Iran respectively, and thus when Bahá'ís currently refer to pilgrimage, it refers to a nine-day pilgrimage which consists of visiting the holy places at the Bahá'í World Centre in northwest Israel in Haifa, Acre, and Bahjí.[3] 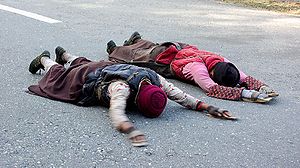 Tibetans on a pilgrimage to Lhasa, doing full-body prostrations, often for the entire length of the journey

There are four places that Buddhists make pilgrimage to:

Other famous places for Buddhist pilgrimage include: 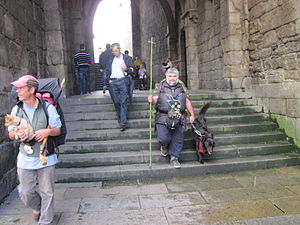 Pilgrimages were, and are, also made to Rome and other sites associated with the apostles, saints and Christian martyrs, as well as to places where there have been apparitions of the Virgin Mary. A popular pilgrimage site is along the Way of St. James to Santiago de Compostela, in Galicia, Spain, to the shrine of the apostle James. Chaucer's The Canterbury Tales recounts tales told by Christian pilgrims on their way to Canterbury Cathedral and the shrine of Thomas Becket.

Bathing ghat on the Ganges during Kumbh Mela, Haridwar 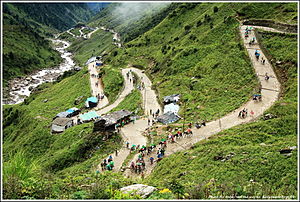 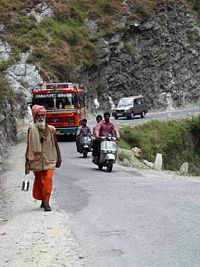 Pilgrims on their way to Manikaran, Himachal Pradesh, India, in 2004

According to Karel Werner's Popular Dictionary of Hinduism, "most Hindu places of pilgrimage are associated with legendary events from the lives of various gods.... Almost any place can become a focus for pilgrimage, but in most cases they are sacred cities, rivers, lakes, and mountains."[4] Hindus are encouraged to undertake pilgrimages during their lifetime, though this practice is not considered absolutely mandatory. Most Hindus visit sites within their region or locale.

Kumbh Mela: Kumbh Mela is the largest pilgrimage recorded in history.[5][6][7][citation needed] Kumbh Mela is also credited with the largest gathering of humans in the entire world. The location is rotated among Allahabad, Haridwar, Nashik, and Ujjain.

Shakti Peethas: Another important set of pilgrimages are the Shakti Peethas, where the Mother Goddess is worshipped, the two principal ones being Kalighat and Kamakhya. 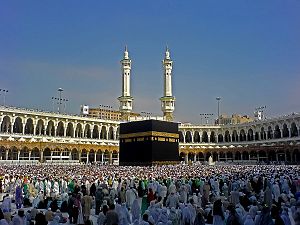 Muslim pilgrims circumambulate around the Ka’aba during the Hajj 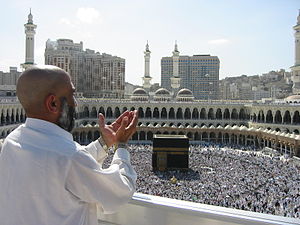 The pilgrimage to Mecca (Hajj) is one of the five pillars of Islam and a mandatory religious duty for Muslims that must be carried out at least once in their lifetime by all adult Muslims who are physically and financially capable of undertaking the journey, and can support their family during their absence.[8][9][10] The gathering during the Hajj is considered the largest annual gathering of people in the world.[11][12][13]

Another important place for Muslims is the city of Medina, the second holiest site in Islam, in Saudi Arabia, the final resting place of Muhammad in Al-Masjid al-Nabawi (Mosque of the Prophet).[14]

The Ihram (white robes of pilgrimage) is meant to show equality of all Muslim pilgrims in the eyes of God, that there is no difference between a prince and a pauper. Ihram is also symbolic for holy virtue and pardon from all past sins.

Arba'een (Arabic: الأربعين‎‎, "forty"), Chehelom (Persian: چهلم‎‎, Urdu: چہلم‎, "the fortieth [day]") or Qirkhi, Imamin Qirkhi (Azerbaijani: İmamın qırxı, امامین قیرخی, "the fortieth of Imam") is a Shia Muslim religious observance that occurs forty days after the Day of Ashura. It commemorates the martyrdom of Husayn ibn Ali, the grandson of Muhammad, which falls on the 20th or 21st day of the month of Safar. Imam Husayn ibn Ali and 72 companions were killed by Yazid I's army in the Battle of Karbala in 61 AH (680 CE). Arba'een or forty days is also the usual length of mourning after the death of a family member or loved one in many Muslim traditions. Arba'een is one of the largest pilgrimage gatherings on Earth, in which up to 31 million people go to the city of Karbala in Iraq.[15][16][17][18][19]

The second largest holy city in the world, Mashhad attracts more than 20 million tourists and pilgrims every year, many of whom come to pay homage to the Imam Reza shrine (the eighth Shi'ite Imam). It has been a magnet for travelers since medieval times.[20] 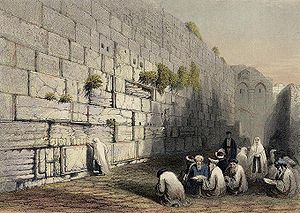 Jews at the Wailing Wall in Jerusalem during the Ottoman period, 1860
See also: Jerusalem in Judaism and Three Pilgrimage Festivals

While Solomon's Temple stood, Jerusalem was the centre of the Jewish religious life and the site of the Three Pilgrimage Festivals of Passover, Shavuot and Sukkot, and all adult men who were able were required to visit and offer sacrifices (korbanot) at the Temple. After the destruction of the Temple, the obligation to visit Jerusalem and to make sacrifices no longer applied. The obligation was restored with the rebuilding of the Temple, but following its destruction in 70 CE, the obligation to make a pilgrimage to Jerusalem and offer sacrifices again went into abeyance.

The western retaining wall of the Temple Mount, known as the Western Wall or Wailing Wall, remains in the Old City of Jerusalem and is the most sacred and visited site for Jews. Pilgrimage to this area was off-limits to Jews from 1948 to 1967, when East Jerusalem was under Jordanian control.

There are numerous lesser Jewish pilgrimage destinations, mainly tombs of tzadikim, throughout the Land of Israel and all over the world, including: Hebron; Bethlehem; Mt. Meron; Netivot; Uman, Ukraine; Silistra, Bulgaria; Damanhur, Egypt; and many others.[21]

The Harmandir Sahib (the Golden Temple) in Amritsar

The Sikh religion does not place great importance on pilgrimage. Guru Nanak Dev was asked "Should I go and bathe at pilgrimage places?" and replied: "God's name is the real pilgrimage place which consists of contemplation of the word of God, and the cultivation of inner knowledge."

Eventually, however, Amritsar and Harmandir Saheb (the Golden Temple) became the spiritual and cultural centre of the Sikh faith, and if a Sikh goes on pilgrimage it is usually to this place.[22]

In Iran, there are pilgrimage destinations called pirs in several provinces, although the most familiar ones are in the province of Yazd. In addition to the traditional Yazdi shrines, new sites may be in the process of becoming pilgrimage destinations. The ruins are the ruins of ancient fire temples. One such site is the ruin of the Sassanian era Azargoshasb Fire Temple in Iran's Azarbaijan Province. Other sites are the ruins of fire temples at Rey, south of the capital Tehran, and the Firouzabad ruins sixty kilometres south of Shiraz in the province of Pars.

In India the cathedral fire temple that houses the Iranshah Atash Behram, located in the small town of Udvada in the west coast province of Gujarat, is a pilgrimage destination.