Pillar of the Boatmen

The Pillar of the Boatmen (French Pilier des nautes) is a square-section stone bas-relief with depictions of several deities, both Gaulish and Roman. Dating to the first quarter of the 1st century AD, it originally stood in a temple in the Gallo-Roman civitas of Lutetia (modern Paris, France) and is one of the earliest pieces of representational Gaulish art to carry a written inscription (Hatt 1952). It is displayed in the frigidarium of the Thermes de Cluny.

Written in Latin with some Gaulish language features, the inscription mingles Roman deities with gods that are distinctly Gallic. The pillar is dated by a dedication to Tiberius Caesar Augustus, that is, Tiberius, who became emperor in 14 AD. It was set up publicly (publice posierunt) by the guild of sailors of Lutetia, from the civitas of the Parisii (nautae Parisiaci). These sailors would have been merchants who travelled along the Seine.

The main dedication is to Jupiter, in the form of Iovis Optimus Maximus ("Jove Best and Greatest"). The names of the emperor and the supreme deity appear in the dative case as the recipients of the dedication. The remaining theonyms are nominative legends that accompany individual depictions of the gods. These are (in the order they appear below) Jove, Tarvos Trigaranos (the Bull with three Cranes), Volcanus (Vulcan), Esus, Cernunnos, Castor, Smertrios, and Fortuna. 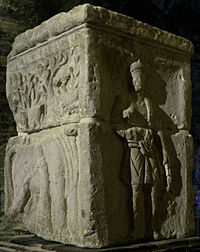 The pillar provides the only undisputed instance of the divine name Cernunnos (Koch 2006, p. 396). The Gaulish theonyms are presented as deity names in their own right, and not as epithets for Roman gods (by contrast, see the many Celtic gods syncretized with Mars). Other figures appear on the pillar without legible inscriptions, including the Roman gods Mars and Mercury, who can be identified by their conventional iconography, and other unidentified figures, mainly female.

The pillar is made of a type of limestone called "pierre de Saint-Leu-d'Esserent", from Saint-Leu, Oise, France. The original pillar would have been 5.24m high, 0.91m wide at the base and 0.74m wide at the top (Saragoza 2003).

It is formed in four tiers. Although the order from top to bottom is reasonably certain from the relative sizes of the blocks, we do not know the rotational order in which the blocks were arranged; there are 64 possibilities.

The top tier, of which only the top half remains, depicts Cernunnos, Smertrios, and Castor and Pollux. Cernunnos has stag's antlers from which hang two torcs. From the amount of the body in the top half, Cernunnos is assumed to have been depicted in a cross-legged seated position as is typical of other Cernunnos depictions (Bober 1951, pp. 14, 19, 21–24); there is insufficient room for him to be seated on a chair or standing (Bober 1951, p. 30). Smertrios is shown kneeling, brandishing a club and attacking a snake. Castor and Pollus are shown standing beside their horses, each holding a spear (Busson 1998, p. 451).

The third tier, the top half of which survives, bears the main dedicatory inscription on one face. Since this has a border and appears complete, the content of the bottom half of this face is unknown. The other sides show a group of three young men with shields and spears; a group of three older, bearded men with spears and shields, bearing the inscription Iurises; and a group of three figures, at least one of which is female. They are unarmed, dressed in flowing gowns, and have an inscription Senani U[s]eiloni (Busson 1998, p. 448).

The fourth, lowest tier is slightly wider than the upper three. Only the top half remains, and the inscriptions are badly damaged. Each face shows a pair of standing figures. Mars, with spear and sword, is accompanied by a female deity with large round ear-rings and a flowing garment which is held over one arm. Mercury, identifiable by his caduceus, is depicted with a goddess who may be Rosmerta, his frequent companion in Gallic art. Fortuna is accompanied by another female deity, perhaps Juno. Two other unidentified female deities are on the fourth face, the one to the left is naked to the waist and holds a large cloak behind her with upraised arms; the other is clothed and has large round ear-rings (Busson 1998, p. 447).

The Gaulish town of Lutetia was built on the Île de la Cité, an island in the middle of the Seine; a good defensive position and well suited to controlling trade along the river (Carbonnières 1997, pp. 13–15, 35–40). It is mentioned by Julius Caesar in the Gallic Wars. The Gallo-Roman town extended onto the south bank of the river, but the island remained the heart of the city and it was here that the forum and several temples were built. The pillar was erected outside one of these temples.

History of the Pillar

Some time in the 3rd century, the stone blocks that formed the pillar were broken into two and used to reinforce the foundations of the walls along the riverbank. Over time, the island grew slightly so that the 3rd-century wharfs are now a dozen meters from the banks of the modern river (Kruta 1883).

The Christian cathedral of St. Etienne was founded by Childebert in 528 AD on the site of the Gallo-Roman temple; Notre-Dame de Paris was in turn built over this in 1163 AD.

The pillar was found on 6 March 1710 (not 1711, as is often erroneously stated) during the construction of a crypt under the nave of Notre-Dame de Paris and first published by Baudelot de Dairval in 1712 (Busson 1998, pp. 445–446). Not all of the pieces were recovered; for three of the tiers we have only the top half.

After discovery, the stone blocks were taken to the Hôtel de Cluny, a mediaeval ecclesiastical building constructed over the remains of a 2nd-century Roman bath house. This became the Musée de Cluny and then, the Musée national du Moyen Age.

In 2001, the blocks were restored, removing the black patina of grime that had accumulated on the surface of the stone over the three centuries since discovery (Saragoza 2003). The restored stones are once again on display in the museum.