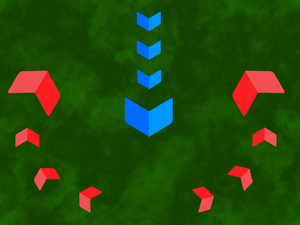 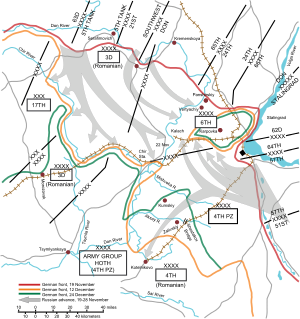 The envelopment of the German Sixth Army at the Battle of Stalingrad.

The pincer movement, or double envelopment, is a military maneuver in which forces simultaneously attack both flanks (sides) of an enemy formation. The name comes from visualizing the action as the split attacking forces "pinching" the enemy.

The pincer movement typically occurs when opposing forces advance towards the center of an army that responds by moving its outside forces to the enemy's flanks to surround it. At the same time, a second layer of pincers may attack on the more distant flanks to keep reinforcements from the target units.

A full pincer movement leads to the attacking army facing the enemy in front, on both flanks, and in the rear. If attacking pincers link up in the enemy's rear, the enemy is encircled. Such battles often end in surrender or destruction of the enemy force, though the encircled force can try to break out. They can attack the encirclement from the inside to escape, or a friendly external force can attack from the outside to open an escape route.

Sun Tzu, in The Art of War (traditionally dated to the 6th Century BC), speculated on the maneuver, but advised against trying it, feeling that an army would likely run first before the move could be completed. He argued that it was best to allow the enemy a path to escape (or at least the appearance of one), as the target army would fight with more ferocity when completely surrounded, but would lose formation and be more vulnerable to destruction if shown an avenue of escape.

The maneuver may have first been used at the Battle of Marathon in 490 BC. The historian Herodotus describes how the Athenian general Miltiades deployed 10,000 Athenian and 900 Plataean hoplite forces in a U formation, with the wings manned much deeper than the center. His enemy outnumbered him heavily, and Miltiades chose to match the breadth of the Persian battle line by thinning out the center of his forces while reinforcing the wings. In the course of the battle, the weaker central formations retreated, allowing the wings to converge behind the Persian battle line and drive the more numerous, but lightly armed Persians to panicky retreat.

The manoeuvre was used by Alexander the Great at the Battle of the Hydaspes in 326 BC. Launching his attack at the Indian left flank, the Indian commander Porus reacted by sending the cavalry on the right of his formation around in support. Alexander had positioned two cavalry units on the left of his formation, hidden from view, under the command of Coenus and Demitrius. These units were then able to follow Porus' cavalry around, trapping them in a classic pincer movement. This tactically astute move from Alexander was key in ensuring what many regard as his last great victory.

The most famous example of its use was at the Battle of Cannae in 216 BC, when Hannibal executed the maneuver against the Romans. Military historians view this as one of the greatest battlefield maneuvers in history, and cite it as the first successful use of the pincer movement that was recorded in detail,[1] by the Greek historian Polybius.

Daniel Morgan used it effectively at the Battle of Cowpens in 1781 in South Carolina. Many consider Morgan's cunning plan at Cowpens the tactical masterpiece of the American War of Independence.

Zulu impis used a version of the maneuver that they called the buffalo horn formation.

Genghis Khan used a rudimentary form known colloquially as the horns tactic. In that case, two enveloping flanks of horsemen surrounded the enemy, though they usually remained unjoined, leaving the enemy an escape route to the rear, as described above. This was key to many of Genghis' early victories over other Mongolian tribes. 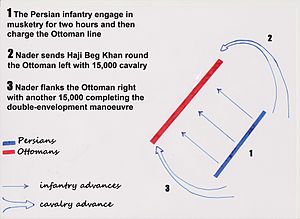 Even in the horse and musket era we see the manoeuvre utilised across many military cultures, for example a classic double envelopment was deployed by the Asiatic conqueror Nader Shah at the Battle of Kirkuk (1733) against the Ottomans where the Persian army under Nader flanked the Ottomans on both ends of their line and encircled their centre despite being numerically at a disadvantage. In another battle at Kars in 1745, Nader routed the Ottoman army and subsequently encircled their encampment. The Ottoman army soon after collapsed under the pressure of the encirclement.

The maneuver was famously developed to perfection in the blitzkrieg of the armed forces of Nazi Germany during World War II. In this case, rather than a mere infantry maneuver, it developed into a complex multi-discipline endeavor that involved fast movement by mechanized armor, artillery barrages, air force bombardment, and effective radio communications—with the primary objective of destroying enemy command and control chains, undermining enemy troop morale, and disrupting supply lines.