The Pindus (also Pindos or Pindhos[1]) (Greek: Πίνδος) mountain range is located in northern Greece and southern Albania. It is roughly 160 km long, with a maximum elevation of 2,637 m (Mount Smolikas). Because it runs along the border of Thessaly and Epirus, the Pindus range is often called the "spine of Greece". The mountain range stretches from near the Greek-Albanian borders in Northern Epirus, entering the Epirus region and Macedonia region in northern Greece down to the north of the Peloponnese. Geologically it constitutes an extension of the Dinaric Alps, which dominate the western region of the Balkan Peninsula. This vast complex of mountains, peaks, plateaus, valleys and gorges traverses the Greek mainland from the Northwest to the Southeast. Its length reaches almost 230 kilometers and its largest width is 70 kilometers.

Historically, the name Pindos refers to the mountainous territory that separates the greater Epirus region from the regions of Macedonia and Thessaly.

P. Sustal says that, according to John Tzetzes (12th century Byzantine writer), the Pindos range was called Metzovon at the time. We cannot be sure how valid this testimony is, but it certainly indicates a popular name given to the mountain range, which is also confirmed by more recent sources.

When el translated (between 1682/83 and 1689) to a more conversational (colloquial) language the initial praise to St. Vissarion, which was drafted in 1552 by el, he wrote: “A mountain called by the Greeks Pindos is the same mountain which is called Metzovon in Barbarian” and further down the same text he adds “this mountain, Metzovon, separates the Ioannina region from the Thessaloniki region.”

The identification of the name Metsovo with the Pindos mountain range is reproduced in a French encyclopedia of 1756.[2] John Cam Hobhouse also appears to adopt this viewpoint, seeing as in 1825 he mentions in his writings: "…the latter mountains, now known by the name of Metzovo, can be no other than Pindus itself…"[3] while a patriarchal document of 1818 says: “Because the high mountain of Pindos in Epirus, that is commonly called Messovon,…».

Furthermore, a series of sources refer to Pindos as the “mountains of Metsovo.” Evidently, the word Pindos is part of the literary legacy, while the folk name for the mountain range from medieval times up to the 19th century was either “Metsovo” or “the mountains of Metsovo.” Most probably this name did not include the whole range as it is meant today, but only its central part between the area of Aspropotamos and the springs of the Aoös River. It is further noteworthy that this part coincides with the mountainous region which the ancient Greeks used to call Pindos.

The most important mountains in the range are Mount Grammos, Mount Smolikas, Mount Vasilitsa, Tymfi or Gamila, Lakmos or Peristeri, the Athamanika or Tzoumerka mountains, the Agrafa Mountains and others. Some mountains in Southern Greece are also considered part of the extended Pindos range. Its highest peak is on Mount Smolikas at an altitude of 2,637 meters.

There are many villages in the Pindus, one of them being Samarina, which boasts one of the highest elevations in Greece. Many of the villages such as Perivoli and Smixi include communities of Aromanians (Vlachs), originally shepherds and farmers. In the last decades, a number of villages, such as Metsovo, developed into tourist resorts with ski facilities.

The Egnatia Odos highway serves the region and connects it with the rest of Greece.

Besides the imposing mountainous terrain of the range, two of the most magnificent gorges in Europe are located in the area: the Vikos Gorge and the Aoos Gorge. Together with the mountain valley of Valia Kalda they have been declared protected regionsand constitute the National Park of Northern Pindos. Furthermore, many mountain settlements with long history and unique architecture are located throughout the range. 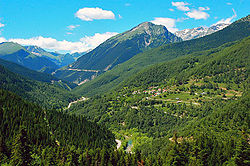 The Pindus ecoregion covers a wide range of elevations and habitats, from deep canyons to steep mountains. The wide range in altitude results in two major forest zones:

Large breeding colonies of herons, spoonbills, egrets, and pelicans fish the cool waters of the mountain lakes of the Pindus Mountain Conifer and Broadleaf Mixed Forests ecoregion. This is one of the few areas in Europe where the rare Dalmatian pelican can be found. Wolves, jackals, and bears are found in the forests. 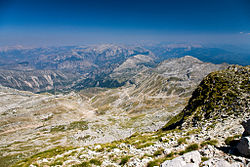 The forests of this ecoregion have faced many threats over the course of human history, including overgrazing, agriculture, and deforestation. The greatest threats now come from the development of mountain tourism and ski resorts. Because of the instability of the soil on steep mountains, road-building and clear-cutting operations have led to dangerous landslides and the collapse of mountain slopes. Mining for bauxite, overgrazing, and over-collection of plants are also threatening the great biodiversity of this ecoregion.

In the Greek section of the Pindus mountains there are two national parks.

The Vikos-Aoos National Park is south of the town of Konitsa, in the west part of Zagori region. It includes Mount Tymfi, the Vikos Gorge and the Aoos Gorge. It was created in 1973.

The Pindus National Park (also known as Valia Kalda) is in a remote area in the north east of the Pindus mountains, north of the town of Metsovo and south of Perivoli. The park of some 7,000 hectares was established in 1966. There are forests of black pine and beech, and in the higher parts, Bosnian Pine (Pinus leucodermis). The park is a refuge for bears, wild cats, and lynxes.[4]

The National Park was selected as main motif for two high value euro collectors' coins: the €10 Greek Birds and Flowers and Black Pine Trees commemorative coins, minted in 2007. On the obverse of one of the coins there is a panoramic view of the common black pine trees that are prevalent in the park.