The European pine marten (Martes martes), known most commonly as the pine marten in Anglophone Europe, and less commonly also known as pineten, baum marten, or sweet marten, is an animal native to Northern Europe belonging to the mustelid family, which also includes mink, otter, badger, wolverine and weasel. It is about the size of a domestic cat. 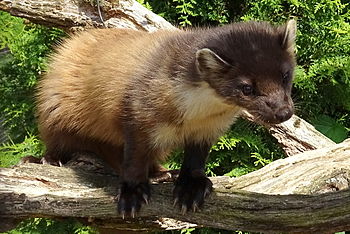 The body is up to 53 cm (21 in) in length, and its bushy tail can be 25 cm (10 in). Males are slightly larger than females; on average a marten weighs around 1.5 kg (3.3 lb). Their fur is usually light to dark brown and grows longer and silkier during the winter months. They have a cream to yellow coloured "bib" marking on their throats.

Their habitats are usually well-wooded areas. European pine martens usually make their own dens in hollow trees or scrub-covered fields. Martens are the only mustelids with semi-retractable claws. This enables them to lead more arboreal lifestyles, such as climbing or running on tree branches, although they are also relatively quick runners on the ground. They are mainly active at night and dusk. They have small rounded, highly sensitive ears and sharp teeth adapted for eating small mammals, birds, insects, frogs, and carrion. They have also been known to eat berries, birds' eggs, meat, nuts and honey. European pine martens are territorial animals that mark their range by depositing faeces (called 'scats') in prominent locations. These scats are black and twisted and can be confused with those of the fox, except that they reputedly have a floral odour.[1]

Threats to this species

Although they are preyed upon occasionally by golden eagles and by red foxes, humans are the largest threat to pine martens. They are vulnerable from conflict with humans, arising from predator control for other species, or following predation of livestock and the use of inhabited buildings for denning. Martens may also be affected by woodland loss.[2] Persecution (illegal poisoning and shooting) by gamekeepers, and loss of habitat leading to fragmentation, and human disturbance, have caused a considerable decline in the pine marten population. They are also prized for their very fine fur in some areas. In the United Kingdom, European pine martens and their dens are offered full protection under the Wildlife and Countryside Act 1981 and the Environmental Protection Act 1990.[3] 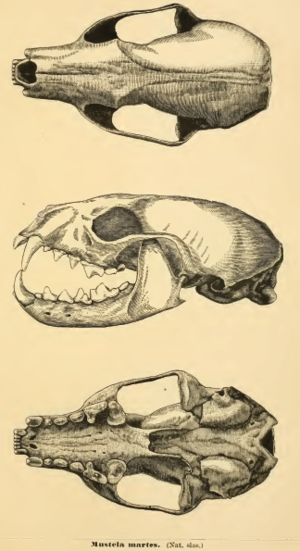 In Great Britain, the species was until recently only at all common in north-western Scotland.[4] Some individuals have lost their fear of man and come to take food provided for them, particularly enjoying jam and peanut butter.[citation needed] A study in 2012 found that martens have spread from their Highland stronghold, north into Sutherland and Caithness and south-eastwards from the Great Glen into Moray, Aberdeenshire, Perthshire, Tayside and Stirlingshire, with some in the Central Belt, on the Kintyre and Cowal peninsulas and on Skye and Mull. The expansion in the Galloway Forest has been limited compared with that in the core marten range. Martens were reintroduced to the Glen Trool Forest in the early 1980s. Only restricted spread has occurred from there.[2]

In England, pine martens are extremely rare, and long considered probably extinct. A scat found at Kidland Forest in Northumberland in June 2010 may represent either a recolonisation from Scotland, or a relict population that has escaped notice previously.[5] There have been numerous reported sightings of pine martens in Cumbria, however, it was not until 2011 that concrete proof – some scat that was DNA tested – was found.[6] In July 2015 the first confirmed sighting of a pine marten in England for over a century was recorded by an amateur photographer in woodland in Shropshire.[7]

There is also a small population of pine martens in Wales. Scat found in Cwm Rheidol forest in 2007 was confirmed to be from a pine marten using DNA testing. A male was found in 2012 as road-kill near Newtown, Powys. This was the first confirmed sighting in Wales of the species, living or dead, since 1971.[8]

It is still quite rare in Ireland, but the population is recovering and spreading; its traditional strongholds are in the west and south, especially The Burren, but the population in the Midlands has significantly increased in recent years.[9] A study managed by academics at Queens University Belfast, using cameras and citizen scientists, published in 2015, showed that Pine Martens were distributed across every county in Northern Ireland.[10]

The European pine marten has lived to 18 years in captivity, but in the wild a lifespan of eight to ten years is more typical. They reach sexual maturity at two or three years of age. The young are usually born in March or April after a 7-month-long gestation period in litters of one to five. Young European pine martens weigh around 30 grams at birth. The young begin to emerge from their dens by the middle of June and are fully independent around six months after their birth.[citation needed]