From Infogalactic: the planetary knowledge core
(Redirected from Pineapple express)
Jump to: navigation, search
This article is about a meteorological phenomenon. For the 2008 film, see Pineapple Express (film). 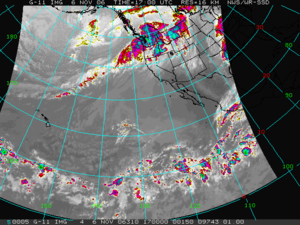 Pineapple Express is a non-technical term for a meteorological phenomenon characterized by a strong and persistent flow of atmospheric moisture and associated with heavy precipitation from the waters adjacent to the Hawaiian Islands and extending to any location along the Pacific coast of North America. A Pineapple Express is an example of an atmospheric river, which is a more general term for such narrow corridors of enhanced water vapor transport at mid-latitudes around the world. 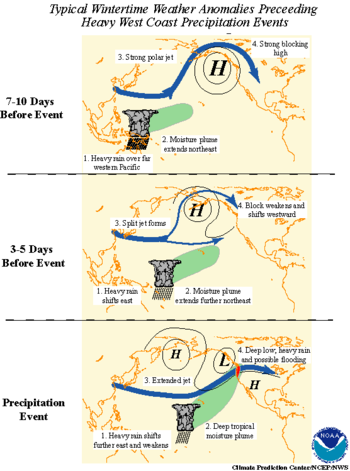 How the Madden-Julian oscillation can induce a Pineapple Express.

A Pineapple Express is driven by a strong, southern branch of the polar jetstream and is marked by the presence of a surface frontal boundary which is typically either slow or stationary, with waves of low pressure traveling along its axis. Each of these low pressure systems brings enhanced rainfall.

The conditions are often created by the Madden-Julian oscillation, an equatorial rainfall pattern which feeds its moisture into this pattern. They are also present during an El Niño episode.

The composition of moisture-laden air, atmospheric dynamics, and orographic enhancement resulting from the passage of this air over the mountain ranges of the western coast of North America causes some of the most torrential rains to occur in the region. Pineapple Express systems typically generate heavy snowfall in the mountains and Interior Plateau, which often melts rapidly because of the warming effect of the system. After being drained of their moisture, the tropical air masses reach the inland prairies as a Chinook wind or simply "a Chinook", a term which is also synonymous in the Pacific Northwest with the Pineapple Express.[citation needed]

Many Pineapple Express events follow or occur simultaneously with major arctic troughs in the northwestern United States, often leading to major snow-melt flooding with warm, tropical rains falling on frozen, snow laden ground.[1] Examples of this are the Christmas flood of 1964 and the Willamette Valley Flood of 1996.

Early in 1862, extreme storms riding the Pineapple Express[2][3] battered the west coast for 45 days. In addition to a sudden snow melt, some places received an estimated 8.5 feet of rain,[3] leading to the worst flooding in recorded history of California, Oregon, and Nevada. Known as the Great Flood of 1862, both the Sacramento and San Joaquin valleys flooded, and there was extensive flooding and mudslides throughout the region.[4]

The San Francisco Bay Area is another locale along the Pacific Coast which is occasionally affected by a Pineapple Express. When it visits, the heavy, persistent rainfall typically causes flooding of local streams as well as urban flooding. In the decades before about 1980, the local term for a Pineapple Express was "Hawaiian Storm".[5] During the second week of January, 1952, a series of "Hawaiian" storms swept into Northern California, causing widespread flooding around the Bay Area.

The same storms brought a blizzard of heavy, wet snow to the Sierra Nevada Mountains, notoriously stranding the train City of San Francisco on January 13. The greatest flooding in Northern California since the 1800s occurred in 1955 as a result of a series of Hawaiian storms, with the greatest damage in the Sacramento Valley around Yuba City. 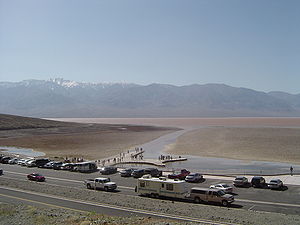 A Pineapple Express battered Southern California from January 7 through January 11, 2005. This storm was the largest to hit Southern California since the El Niño of 1997-98.[6] The storm caused mud slides and flooding, with one desert location just north of Morongo Valley receiving about 9 inches (230 mm) of rain, and some locations on south and southwest-facing mountain slopes receiving spectacular totals: San Marcos Pass, in Santa Barbara County, received 24.57 inches (624 mm), and Opids Camp (AKA Camp Hi-Hill) in the San Gabriel Mountains of Los Angeles County was deluged with 31.61 inches (80.3 cm) of rain in the five-day period.[7] In some areas the storm was followed by over a month of near-continuous rain. 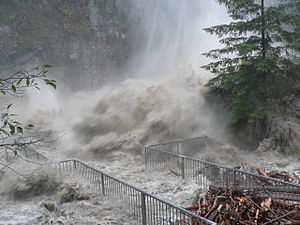 The Puget Sound region from Olympia, Washington to Vancouver, BC received several inches of rain per day in November 2006 from a series of successive Pineapple Express storms that caused massive flooding in all major regional rivers and mudslides which closed the mountain passes. These storms included heavy winds which are not usually associated with the phenomenon. Regional dams opened their spillways to 100% as they had reached capacity because of rain and snowmelt. Officials referred to the storm system as "the worst in a decade" on November 8, 2006. Portions of Oregon were also affected, including over 14 inches (350 mm) in one day at Lees Camp in the Coast Range, while the normally arid and sheltered Interior of British Columbia received heavy coastal-style rains.[citation needed]

In December 2010, a Pineapple Express system ravaged California from December 15 through December 22, bringing with it as much as 2 feet (61 cm) of rain to the San Gabriel Mountains and over 13 feet (4.0 m) of snow in the Sierra Nevada. Although the entire state was affected, the Southern California counties of San Bernardino, Orange, San Diego, and Los Angeles bore the brunt of the system of storms, as coastal and hillside areas were impacted by mudslides and major flooding.[9]

In December 2014, a powerful winter storm fueled by a Pineapple Express hit Northern California, resulting in snow, wind, and flood watches.[10] A blizzard warning was issued by the National Weather Service for the Northern Sierra Nevada for the first time in California since 2008.[11] The storm caused power outage for more than 50,000 people.[12] It was expected to be the most powerful storm to impact California since the January 2010 California winter storms.[13][14] A rare tornado touched down in Los Angeles on December 12.[15]