He grew up and studied in the city Tel Aviv. He experienced a rough childhood, as his biological father abandoned the family at the age of one year and left him with his mother, in poverty conditions.

As a basketball player 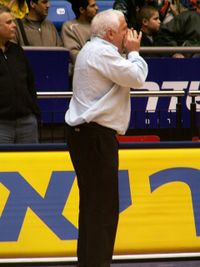 Pini Gershon on the Court

After the short career as a basketball player, he began to coach in different Israeli teams, among them, Maccabi Rishon LeZion, Hapoel Galil Elyon, Hapoel Gan Shmuel-Menashe, Hapoel Tel Aviv and Hapoel Jerusalem, as well as the assistant coach for the Israel national basketball team.

In 1993 he led Hapoel Galil Elyon to the Israeli championship, the first time in 36 years that it had not been won by Maccabi Tel Aviv. In 1996 he won the Israeli national cup as the coach of Hapoel Jerusalem, after beating Maccabi in the final.

In the different interviews he expressed himself poignantly against Maccabi Tel Aviv and against the club's dominance of Israeli basketball. Therefore it was quite a surprise[editorializing] when he become Maccabi Tel Aviv's coach at the end of 1998. In that time Maccabi Tel Aviv was in a professional crisis after several years of failing to enter the top stages of the European basketball tournament, a status which it has enjoyed in the past.

Under his, and his assistant David Blatt's lead, Maccabi Tel Aviv surprisingly advanced to the Euroleague finals in 2000, losing to Greek powerhouse Panathinaikos in the final game. A year later Maccabi was crowned European Champions, clinching the FIBA SuproLeague title. However, this achievement was shadowed by the split between two European basketball unions into two separate leagues, which meant that most top European teams did not compete against Maccabi.

After the 2001 season, Gershon took a break from coaching, mainly for some self-searching and traveling around the world. This temporary retirement lasted two seasons, and in the summer of 2003 Gershon returned to his former position as the head coach of Maccabi, for the purpose of reaching the Euroleague 2003-04 Final Four tournament, which took place in Tel Aviv. That goal was two seconds away from failure, when Maccabi, hosting BC Žalgiris in the match for the last spot in the tournament, had to come from behind. A marvelous three-point buzzer-beater by Derrick Sharp sent that game into overtime, in which Maccabi won and advanced to the Final Four. Maccabi, under Gershon, went on to have an unforgettable tournament, crushing Skipper Bologna 118-74 in the final to become the Euroleague 2003-04 champions for the fourth time.

In 2005 Gershon led Maccabi Tel Aviv to another Euroleague championship season. Having been league favorites all season long, Maccabi Tel Aviv advanced to the Euroleague 2003-04 in Moscow. The expected final was to be between Maccabi and host CSKA Moscow. However, CSKA surprisingly lost its semifinal game to TAU Vitoria. In the final, Maccabi easily beat TAU by a score of 90–78. Gershon was named Euroleague Coach of the Year.

During the 2006–2006, Gershon hinted that this would be his last season with Maccabi. That year he again led the team to the Euroleague Final Four. This time, however, luck has run out, as Maccabil lost the final game to CSKA Moscow 73-69. Gershon left Maccabi at the end of the season, and signed with Greek Olympiacos BC.

In his first season as head coach of Olympiacos, Gershon led the team to the national finals against Panathinaikos and in the final 8 of the Euroleague, where the team was eliminated by TAU Cerámica. Again, accusations of racism were raised, mainly by Olympiacos fans, concerning the lack of playing time for team star and crowd favorite Sofoklis Schortsianitis.

Pinhas Gershon is the only Israeli basketball coach to ever have won the European cup three times. Today, he is considered to be one of the greatest coaches in Europe.

On September 2008 he led the National team of Bulgaria to EuroBasket 2009 in Poland after surprising finish ahead of the strongly favored Italian national team in the preliminary round. On November 24, 2008, he signed as Maccabi Tel Aviv coach, after the dismissal of Effi Birnbaum.

On October 2009 he was ejected from an exhibition game against the New York Knicks. Gershon took close to 6 minutes to exit the court as NBA rules (administered by replacement on-court officials) differ from international rules regarding technical fouls causing coaches to be automatically ejected.

On August 2014, he signed an one season contract to be assistant coach under Guy Goodes for Maccabi Tel Aviv.

Gershon often eagerly voices his belief in the part divine guidance has had in his career. He has close ties with the Chabad movement.

In the year 2001 Gershon was accused of racism after reporters found a video showing Gershon lecturing before a group of IDF officers. In this lecture Gershon made some controversial remarks about African American people[2]“The mocha-colored guys are smarter, but the dark colored ones are just guys off the street,” he said. “They’re dumb like slaves, they do whatever you tell them.” Gershon claimed that those remarks were only made as a joke and that they were not reflective of his real opinions.[3]