From Infogalactic: the planetary knowledge core
Jump to: navigation, search
File:Taopere.jpg
Pinisi boats at the port of Paotere in Makassar
File:Pinisi-10.JPG
Drawing of a Pinisi of Lamba type 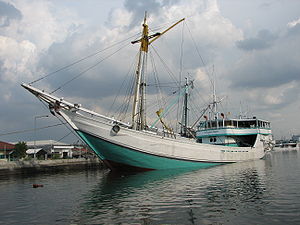 The pinisi or phinisi is a traditional Indonesian two-masted sailing ship. It was mainly built by the Konjo tribe, a sub-ethnic group of Bugis-Makassar mostly residents at the Bulukumba regency of South Sulawesi but was, and still is used widely by the Buginese and Makassarese, mostly for inter-insular transportation, cargo and fishing purposes within Indonesian archipelago.

The hull of the ships looks similar to that of a dhow while the fore-and-aft rigging recalls western schooners, although it might be more correctly termed to resemble a ketch, as the front mast is the larger.

The large mainsails differ from western style gaff rigs though, as they often do not have a boom and the sail is not lowered with the gaff. Instead it is reefed towards the mast, much like a curtain, thus allowing the gaff to be used as deck crane in the harbour. The lower part of the mast itself may resemble a tripod or is made of two poles.

There are two general types of Pinisi.[1]

The first pinisi ships are said to have been built after the example of the Dutch "pinas" (pinnace) introduced to the region by the V.O.C. around 1600. These probably carried lateen or other type of sails, as the modern schooner rig did not become prominent before the 19th century.

Traditional Buginese lontara manuscripts and stories document the use of pinisi by Buginese for transport, as a sailing boat, and a warship.

During the alliance with the Dutch colonialists, pinisis were mainly used as trade ships, transports, and for fishing. Some sources[which?] say that at the time of the Indonesian National Awakening pinisi were used by Buginese and people of Sulawesi as warships during the Indonesian struggle for independence.

Today, pinisi mainly used for trade, serves as inter-insular cargo, such as to transport timber from Kalimantan to Java, in exchange to transporting grocery and goods from industrialized Java to more remote ports in Indonesian archipelago. Pinisi often frequent traditional ports, such as Sunda Kelapa port in Jakarta, Surabaya, Banjarmasin, and the port of Makassar.

As with many traditional ship types, pinisi have been provided with motors, largely since 1970. This has changed the appearance of the ships. Comparable to modern dhows, the masts have been shortened, or omitted as deck cranes vanished completely, while structures on deck, usually aft, have been enlarged for the crew and passengers.

The pinisi is modified into diving charter boat by foreigner investors for tourism purpose.