The Pioneer Venus Multiprobe, also known as Pioneer Venus 2 or Pioneer 13 was a spacecraft launched in 1978 to explore Venus as part of NASA's Pioneer program. 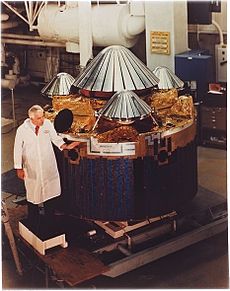 The Pioneer Venus Multiprobe bus was constructed by the Hughes Aircraft Company, built around the HS-507 bus. It was cylindrical in shape, with a diameter of 2.5 metres (8 ft 2 in) and a mass of 290 kilograms (640 lb). Unlike the probes, which did not begin making direct measurements until they had decelerated lower in the atmosphere, the bus returned data on Venus' upper atmosphere.

The bus was targeted to enter the Venusian atmosphere at a shallow entry angle and transmit data until destruction by the heat of atmospheric friction. The objective was to study the structure and composition of the atmosphere down to the surface, the nature and composition of the clouds, the radiation field and energy exchange in the lower atmosphere, and local information on the atmospheric circulation pattern. With no heat shield or parachute, the bus made upper atmospheric measurements with two instruments, an Ion Mass Spectrometer (BIMS) and a Neutral Mass Spectrometer (BNMS), down to an altitude of about 110 km before disintegrating on December 9, 1978.

The spacecraft carried one large and three small atmospheric probes, designed to collect data as they descended into the atmosphere of Venus. The probes did not carry photographic instruments, and were not designed to survive landing - the smaller probes were not equipped with parachutes, and the larger probe's parachute was expected to detach as it neared the ground. All four probes continued transmitting data until impact; however, one survived and continued to transmit data from the surface. 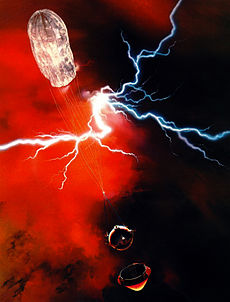 This pressure vessel was encased in a nose cone and aft protective cover. After deceleration from initial atmospheric entry at about 11.5 kilometres per second (7.1 mi/s) near the equator on the night side of Venus, a parachute was deployed at 47 km altitude. The large probe was about 150 centimetres (59 in) in diameter and the pressure vessel itself was 73.2 centimeters (28.8 in) in diameter.

Three identical small probes, around 0.8 metres (2 ft 7 in) in diameter, were deployed. These probes consisted of spherical pressure vessels surrounded by an aeroshell, but unlike the large probe, they had no parachutes and the aeroshells did not separate from the probes.

Each probe carried a nephelometer and temperature, pressure, and acceleration sensors, as well as a net flux radiometer experiment to map the distribution of sources and sinks of radiative energy in the atmosphere. The radio signals from all four probes were also used to characterize the winds, turbulence, and propagation in the atmosphere.

The small probes were each targeted at different parts of the planet and were named accordingly.

The Pioneer Venus Multiprobe was launched by an Atlas SLV-3D Centaur-D1AR rocket, which flew from Launch Complex 36A at the Cape Canaveral Air Force Station. The launch occurred at 07:33 on August 8, 1978, and deployed the Multiprobe into heliocentric orbit for its coast to Venus.

Prior to the Multiprobe reaching Venus, the four probes were deployed from the main bus. The large probe was released on November 16, 1978, and the three small probes on November 20.

The four probes transmitted data until they impacted the surface of Venus. The Day Probe survived impact, returning data from the surface for over an hour.