From Infogalactic: the planetary knowledge core
Jump to: navigation, search
This article is about the US space program. For the communist version of Scouting, see Pioneer movement. 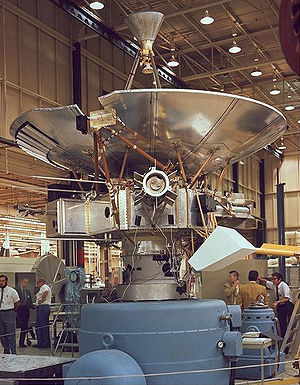 Pioneer 10, undergoing construction in 1971. Pioneer 10 and 11 are the most famous probes in the Pioneer program, the first probes to visit the outer planets, and the first to go beyond the orbit of Pluto. 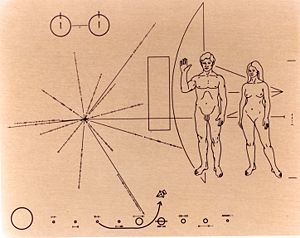 The Pioneer plaque attached to Pioneers 10 and 11

The Pioneer program is a series of United States unmanned space missions that were designed for planetary exploration. There were a number of such missions in the program, but the most notable were Pioneer 10 and Pioneer 11, which explored the outer planets and left the solar system. Pioneer 10 and Pioneer 11 carry a golden plaque, depicting a man and a woman and information about the origin and the creators of the probes, should any extraterrestrials find them someday.

Credit for naming the first probe has been attributed to Stephen A. Saliga, who had been assigned to the Air Force Orientation Group, Wright-Patterson AFB, as chief designer of Air Force exhibits. While he was at a briefing, the spacecraft was described to him as a "lunar-orbiting vehicle with an infrared scanning device." Saliga thought the title too long and lacked theme for an exhibit design. He suggested "Pioneer" as the name of the probe since "the Army had already launched and orbited the Explorer satellite and their Public Information Office was identifying the Army as 'Pioneers in Space,'" and by adopting the name the Air Force would "make a 'quantum jump' as to who really [were] the 'Pioneers in space.'"[1]

The earliest missions were attempts to achieve Earth's escape velocity, simply to show it was feasible and study the Moon. This included the first launch by NASA which was formed from the old NACA. These missions were carried out by the US Air Force and Army. 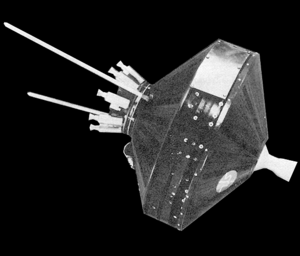 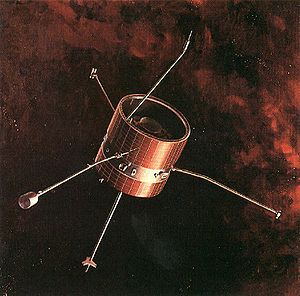 Artist's conception of the Pioneer 6–9 spacecraft 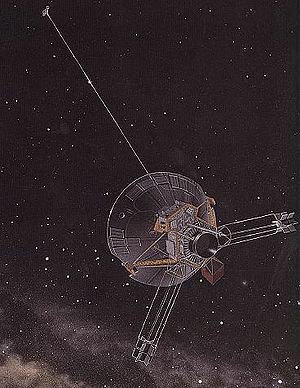 Artist's conception of the Pioneer 10–11 spacecraft

Most missions here are listed with their most recognised name, and alternate names after in parenthesis.

Five years after the early Able space probe missions ended, NASA Ames Research Center used the Pioneer name for a new series of missions, initially aimed at the inner solar system, before the bold flyby missions to Jupiter and Saturn. While successful, the missions returned much poorer images than the Voyager program probes would five years later. In 1978, the end of the program saw a return to the inner solar system, with the Pioneer Venus Orbiter and Multiprobe, this time using orbital insertion rather than flyby missions.

The new missions were numbered from Pioneer 6 (alternate names in parentheses).