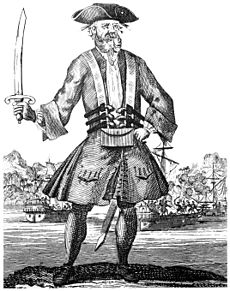 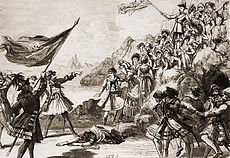 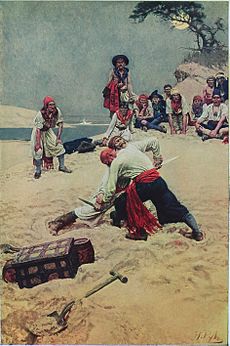 Pirates fight over treasure in a 1911 Howard Pyle illustration. 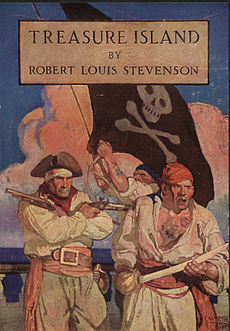 Illustrations of the 1911 edition of Treasure Island, by Pyle's student N.C. Wyeth

In English-speaking popular culture, the modern pirate stereotype owes its attributes mostly to the imagined tradition of the 18th century Caribbean pirate sailing off the Spanish Main and to such celebrated 20th century depictions as Captain Hook and his crew in the theatrical and film versions of Peter Pan, Robert Newton's portrayal of Long John Silver in the 1950 film of Treasure Island, and various adaptations of the Eastern pirate, Sinbad the Sailor. In these and countless other books, movies, and legends, pirates are portrayed as "swashbucklers" and "plunderers." They are shown on ships, often wearing eyepatches or peg legs, having a parrot perched on their shoulder, and saying phrases like "Arr, matey" and "Avast, me hearty." Pirates have retained their image through pirate-themed tourist attractions, traditional film and toy portrayals of pirates, and the continued performance and reading of books and plays featuring pirates.

The archetypal characteristics of pirates in popular culture largely derive from the Golden Age of Piracy in the late 17th and early 18th centuries, with many examples of pirate fiction being set within this era. Vikings, who were also pirates, took on a distinct and separate archetype in popular culture, dating from the Viking revival. The first major literary work to popularise the subject of pirates was A General History of the Robberies and Murders of the most notorious Pyrates (1724) by Captain Charles Johnson,[1] It is the prime source for the biographies of many well known pirates of the Golden Age, providing an extensive account of the period.[2] In giving an almost mythical status to the more colourful characters, such as the notorious English pirates Blackbeard and Calico Jack, the book provided the standard account of the lives of many pirates in the Golden Age, and influenced pirate literature of Scottish novelists Robert Louis Stevenson and J. M. Barrie.[2] While Johnson's text recounted the lives of many famous pirates from the era, it is likely that he used considerable licence in his accounts of pirate conversations.[3]

Stevenson's Treasure Island (1883) is considered the most influential work of pirate fiction, along with its many film and television adaptations, and introduced or popularised many of the characteristics and cliches now common to the genre. Stevenson identified Johnson's General History of the Pyrates as one of his major influences, and even borrowed one character's name (Israel Hands) from a list of Blackbeard's crew which appeared in Johnson's book.[4]

Appearance and mannerisms of Caribbean pirates

In films, books, cartoons, and toys, pirates often have an unrefined appearance that evokes their criminal lifestyle, rogue personalities and adventurous, seafaring pursuits. They are frequently depicted as greedy, mean-spirited, and focused exclusively on fighting enemy pirates and locating hidden treasure. They are often shown wearing shabby 17th or 18th century clothing, with a bandana or a feathered tricorne. They sometimes have an eye patch and almost always have a cutlass and a flintlock pistol, or some other sword or gun. They sometimes have scars and battle wounds, rotten or missing teeth (suggesting the effects of scurvy), as well as a hook or wooden stump where a hand or leg has been amputated. Some depictions of pirates also include monkeys or parrots as pets, the former usually assisting them in thieving goods due to their supposed mischievous disposition.

Stereotypical pirate accents are modeled on those of Cornwall, South Devon or the Bristol Channel area in South West England, though they can also be based on Elizabethan era English or other parts of the world. Pirates in film, television and theatre are generally depicted as speaking English in a particular accent and speech pattern that sounds like a stylized West Country accent, exemplified by Robert Newton's performance as Long John Silver in the 1950 film Treasure Island.[5][6] A native of the West Country in south west England from where many famous English pirates hailed, Newton also used the same strong West Country accent in Blackbeard the Pirate (1952).[7]

Historical pirates were often sailors or soldiers who'd fallen into misfortune, forced to serve at sea or to plunder goods and ships in order to survive. Depending on the moral and social context of a piece of pirate literature, the pirate characters in that piece may be represented as having fallen, perhaps resembling a "respectable" person in some way.[8] Pirates generally quest for buried treasure, which is often stored, after being plundered, in treasure chests. Pirate's treasure is usually gold or silver, often in the form of doubloons or pieces of eight.

In the 1990s, International Talk Like a Pirate Day was invented as a parody holiday celebrated on September 19. This holiday allows people to "let out their inner pirate" and to dress and speak as pirates are stereotypically portrayed to have dressed and spoken. International Talk Like a Pirate Day has been gaining popularity through the Internet since its founders set up a website, which instructs visitors in "pirate speak." Venganza.org is also a major supporter of this day.

In the online community, many games, movies, and other media are built upon the premise, thought to have been generated by Real Ultimate Power, that pirates (in the Caribbean buccaneer sense) and ninjas are sworn enemies. The "Pirates versus Ninjas" meme is expressed offline too, through house parties and merchandise found at popular-culture clothing and gift stores.

Pirates also play a central role in the satirical religion of Pastafarianism. Established in 2005,[9] Pastafarians (members of The Church of the Flying Spaghetti Monster) claim to believe that global warming is a result of the severe decrease in pirates since the 1700s, explaining the coldness associated with winter months that follow Halloween as a direct effect of the number of pirates that make their presence known in celebration.

In addition to the traditional archetype of seafaring pirates, other pirate archetypes exist in popular culture.

The dress and speech of these alternate archetypes may vary. It may correspond to a particular author's vision of a story's setting, rather than their traditional seafaring counterparts. On the other hand, they may be modeled after stereotypical sea pirates.

Pirates in the arts 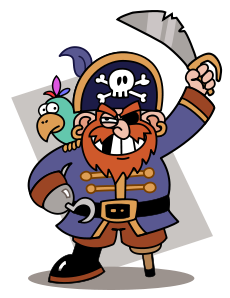 The 1950 film adaption of Treasure Island, as well as the 1954 sequel Long John Silver, both starring Robert Newton, are considered highly influential on the modern perception of early pirates.[5]

In 1879, the comic opera The Pirates of Penzance was an instant hit in New York, and the original London production in 1880 ran for 363 performances.[11] The piece, depicting an incompetent band of "tenderhearted" British pirates, is still performed widely today, and obviously corresponds to historical knowledge about the emergence of piracy in the Caribbean.

While no pirates are ever on stage in William Shakespeare's play Hamlet, Hamlet claims that his ship to England was overtaken by pirates.

In 1904, J.M. Barrie's play Peter Pan, or The Boy Who Wouldn't Grow Up was first performed. In the book, Peter's enemy in Neverland is the pirate crew led by Captain Hook. Details on Barrie's conception of Captain Hook are lacking, but it seems he was inspired by at least one historical privateer, and possibly by Robert Louis Stevenson's Long John Silver as well.[8] In film adaptations released in 1924, 1953, and 2003, Hook's dress, as well as the attire of his crew, corresponds to stereotypical notions of pirate appearance.