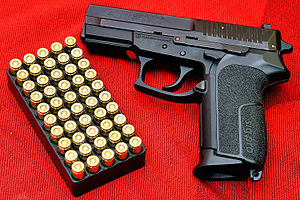 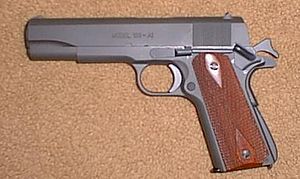 A pistol is a type of handgun. Some handgun experts and dictionaries make a technical distinction that views pistols as a subset of handguns; others use the terms interchangeably. Sometimes in usage, the term "pistol" refers to a handgun having one chamber integral with the barrel,[1][2] making pistols distinct from the other main type of handgun, the revolver, which has a revolving cylinder containing multiple chambers.[3][4] But UK/rest of Commonwealth usage does not always make this distinction, particularly when the terms are used by the military. For example, the official designation of the Webley Mk VI revolver was "Pistol, Revolver, Webley, No. 1 Mk VI".[5] In contrast to Merriam-Webster[3][4] the Oxford English Dictionary (a descriptive dictionary) describes 'pistol' as a small firearm to be used in one hand[6] and the usage of "revolver" as being a type of handgun[7] and gives its original form as "revolving pistol" [8][9] 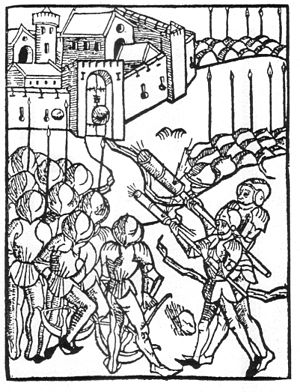 The pistol originates in the 16th century, when early handguns were produced in Europe. The English word was introduced in ca. 1570 from the Middle French pistolet (ca. 1550).

The etymology of the French word pistolet is disputed. It may be from a Czech word for early hand cannons, píšťala "flute", or alternatively from Italian pistolese, after Pistoia, a city renowned for Renaissance-era gunsmithing, where hand-held guns (designed to be fired from horseback) were first produced in the 1540s.[10]

The first suggestion derives the word from Czech píšťala, a type of hand-cannon used in the Hussite Wars during the 1420s. The Czech word was adopted in German as pitschale, pitschole, petsole, and variants.[11]

The second suggestion is less likely; the use of the word as a designation of a gun is not documented before 1605 in Italy, long after it was used in French and German. The Czech word is well documented since the Hussite wars in 1420s.[12]

The most common types of pistol are the single shot, and semi-automatic. 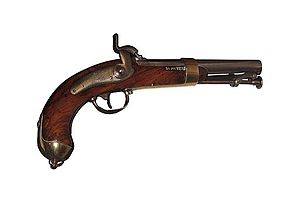 Single shot handguns were mainly seen during the era of flintlock and musket weaponry where the pistol was loaded with a lead ball and fired by a flint striker, and then later a percussion cap. However, as technology improved, so did the single shot pistol. New operating mechanisms were created, and due to this, they are still made today. It is the oldest type of pistol,[citation needed] and is often used to hunt wild game.

Multi-barreled pistols were common during the same time as single shot pistols. As designers looked for ways to increase fire rates, multiple barrels were added to all guns including pistols. One example of a multi-barreled pistol is the Duck's foot pistol, which generally had either four or eight barrels,[13] although some 20th century models had three barrels.[14]

Around 1850, pistols such as the Jarre harmonica gun were produced that had a sliding magazine. The sliding magazine contained pinfire cartridges or speedloaders. The magazine needed to be moved manually in many designs, hence distinguishing them from semi-automatic pistols.[15] 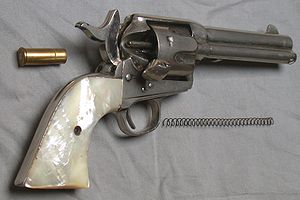 With the development of the revolver in the 19th century, gunsmiths had finally achieved the goal of a practical capability for delivering multiple loads to one handgun barrel in quick succession. Revolvers feed ammunition via the rotation of a cartridge-filled cylinder, in which each cartridge is contained in its own ignition chamber, and is sequentially brought into alignment with the weapon's barrel by an indexing mechanism linked to the weapon's trigger (double-action) or its hammer (single-action). These nominally cylindrical chambers, usually numbering between five and eight depending on the size of the revolver and the size of the cartridge being fired, are bored through the cylinder so that their axes are parallel to the cylinder's axis of rotation; thus, as the cylinder rotates, the chambers revolve about the cylinder's axis. 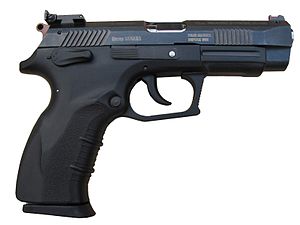 The semi-automatic pistol was the next step in the development of the pistol. By avoiding multiple chambers—which need to be individually reloaded—semi-automatic pistols delivered faster rates of fire and required only a few seconds to reload (depending on the skill of the shooter). In blowback-type semi-automatics, the recoil force is used to push the slide back and eject the shell (if any) so that the magazine spring can push another round up; then as the slide returns, it chambers the round. An example of a modern blow back action semi-automatic pistol is the HK VP70.

The Liberator is a physible, 3D-printable single shot handgun, the first such printable firearm design made widely available online.[16][17][18] The open source firm Defense Distributed designed the gun and released the plans on the Internet on 6 May 2013. The plans were downloaded over 100,000 times in the two days before the US Department of State demanded Defense Distributed retract the plans.[19]