From Infogalactic: the planetary knowledge core
Jump to: navigation, search
This article is about the flatbread. For other uses, see Pita (disambiguation).

Pita or pitta (/ˈpɪtə/ or US /ˈpiːtə/)[1] also known as Syrian Bread or Arabic Bread,[2][3][4] is a soft, slightly leavened flatbread baked from wheat flour that originated in the Near East,[4][5] most probably Mesopotamia around 2500 BC.[6] It is used in many Mediterranean, Balkan and Middle Eastern cuisines and resembles other slightly leavened flatbreads such as Iranian nan-e barbari, South Asian flatbreads and Central Asian naan, and pizza crust.

The first known mention of the word in English was in 1936.[7] The English word is borrowed from Modern Greek πίτα. These all probably come from the Byzantine Greek πίτα 'bread, cake, pie, pitta' (attested in 1108).[7] Some sources trace it to the Ancient Greek πίττα or πίσσα 'pitch/resin',[8][9] while others characterize this as "unlikely" and trace it to Latin picta 'painted', itself supposedly from Greek πηκτή 'congealed'.[10][11] Though the Modern Hebrew word pittāh is spelled like the Aramaic pittəṭā/pittā (which is related to Levantine Arabic fatteh), they are not connected historically.[7] Other hypotheses trace it to Germanic[12] or Illyrian.[13]

The word has been borrowed by Turkish as pide,[14] and appears in the Balkan languages as Serbo-Croatian pita, Romanian pită, Albanian pite, Bulgarian pitka or pita. In Arabic, the phrase "خبز البيتا" (pita bread) is sometimes used; other names are simply "خبز" 'bread' or "الخبز العربي" 'Arab bread' or "خبز الكماج" 'ekamj bread'. 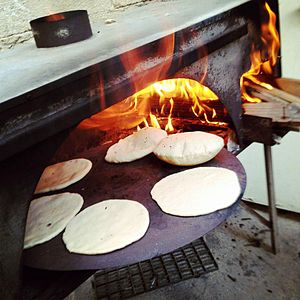 Most pita are baked at high temperatures (450 °F or 232 °C), causing the flattened rounds of dough to puff up dramatically. When removed from the oven, the layers of baked dough remain separated inside the deflated pita, which allows the bread to be opened to form a pocket. However, pita is sometimes baked without pockets and is called "pocket-less pita".

Nowadays, modern commercial pita bread is prepared on advanced automatic lines. These lines have high production capacities ranging from a few hundreds per hour up to thousands per hour.

Pita can be used to scoop sauces or dips such as hummus and taramosalata, or to wrap kebabs, gyros or falafel in the manner of sandwiches. It can also be cut and baked into crispy pita chips.

In Greece, pita is a component of pita-souvlaki. These types of sandwiches involve the wrapping of souvlaki or gyros with tzatziki, tomatoes, onions, french fries, hamburgers, and condiments into a pita bread. Also, pita is the name of a kind of pastry pies which are found all over Greece (as a home meal or as appetizers, snacks or desserts), filled with various ingredients such as Kolokythopita(pumpkin filling), Mizithropita (Crete) (mizithra cheese filling), Melintzanopita(eggplant filling), Tsouknidopita (Urtica leaves filling), Kremydopita (onion filling), Kreatopita (meat pie), Galatopita (cream filling), Marathopita (fennel filling), Tyropita, Spanakopita, Ladopita.

In Cyprus, pita is typically rounder, fluffier and baked on a cast iron skillet. Used for Souvlakia, Sheftalia, Halloumi lountza, and gyros.

In Egyptian, Jordanian, Iraqi, Israeli, Lebanese, Palestinian, and Syrian cuisine, almost every savory dish can be eaten in or on a pita, from falafel, lamb or chicken shawarma, kebab, omelettes such as shakshouka (eggs and tomatoes), hummus and other mezes.

In Turkish cuisine, the word pide may refer to three different styles of bread: to a flatbread similar to that eaten in Greece and Arab countries, to a pizza-like dish where the filling is placed on the (often boat-shaped) dough before baking, and to Ramazan pide. The first type of pide is used to wrap various styles of kebab, while the second is topped with cheese, ground meat or other fresh or cured meats, and/or vegetables. Regional variations in the shape, baking technique, and toppings create distinctive styles for each region.