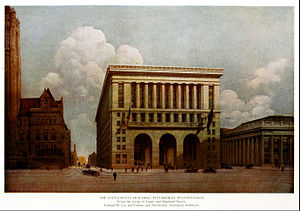 The building was designed by Henry Hornbostel and opened in 1917. Its main hall is surrounded by gilded classical columns 47 feet high, supporting a vaulted ceiling of Gustavino terra cotta tile. Architectural sculpture on the building was created by Charles Keck. 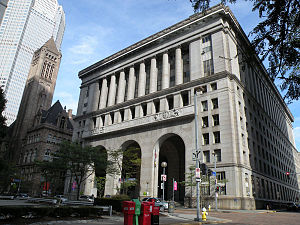 It is one of four city/county service buildings in the neighboring blocks. The Allegheny County Courthouse sits directly across Forbes Avenue. The County Office Building sits directly across Ross Street. The old Allegheny County Jail, now the Family Division of the Allegheny County Court of Common Pleas sits diagonally at Forbes Avenue and Ross Street. Up until the 1960s, the corrections department had its offices to the northeast of the structure.[1] On the seventh floor of the building is a massive mural completed in 1940 entitled "Justice" by award winning artist Harry Scheuch.[2]

1922's In the Name of the Law starred Pittsburgh Pirates great and future Hall of Famer Honus Wagner as the hero, as a Pittsburgh Police Superintendent pitched baseballs off the 144-foot-high roof in the film's climax.

Mayor Magee and the City Hall were featured in 1924's Fording the Lincoln Highway.[3]

Many scenes of the Bruce Willis and Sarah Jessica Parker 1993 police drama Striking Distance were filmed both inside and on the Grant Street entrance to the building. Most notable is the nighttime scene of Dennis Farina's supervisor character arguing with Willis' "Tom Hardy" over the "Polish Hill" documents.

Scenes of the 1997-98 Superman remake Superman Lives were slated to be filmed in the building's "crystal palace" grand mezzanine and serving as Daily Planet offices but production was delayed by Warner Brothers.[5] 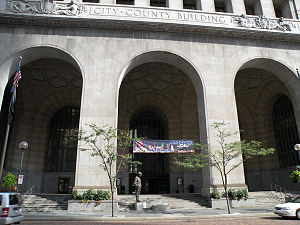