The Pittsburgh Cultural Trust (PCT) is a nonprofit arts organization formed in 1984 promote economic and cultural development in Downtown Pittsburgh.[1] The "Trust" has focused its work on a 14-square block section called the Cultural District,[2] which comprises numerous entertainment and cultural venues, restaurants, and residential buildings. All together, the organization claims to oversee more than one million square feet of real estate, including commercial and residential buildings, making it one of the largest landowners downtown.[3][4] In recent years the organization has had a contentious relationship with the city of Pittsburgh concerning the tax status for many of its properties, resulting in a case being heard by the state Supreme Court in 2011.[5]

The Pittsburgh Cultural Trust was founded in 1984 by H. J. Heinz II with the principal aim of restoring downtown Pittsburgh as a vibrant cultural destination.[6] Heinz and other individuals, including his son, United States (US) Senator from Pennsylvania John Heinz, and William Rea, began with Pittsburgh's first renovated former movie palace, Heinz Hall, (which was built as the former Loew's Penn Theater). 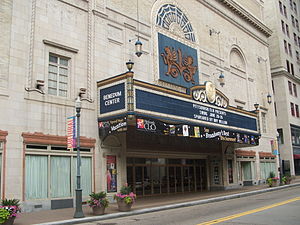 The PCT's first major project was the restoration of the former Stanley Theater. The Stanley Theater was originally designed by the firm of Hoffman & Henon and opened on February 27, 1928. Under the PCT's management, this theater underwent a $43 million restoration[7] and reopened in 1987 as the 2,800-seat Benedum Center for the Performing Arts. That year, the PCT and its partners presented an annual Broadway series in the Cultural District.

The Byham Theater was another theater venue restoration project. Built in 1903 as the Gayety Theater, it included a stage and Vaudeville house, and featured stars such as Ethel Barrymore, Gertrude Lawrence, and Helen Hayes.[8] It was renamed The Fulton in the 1930s when it became a full-time movie theater. In 1990, the PCT bought and refurbished the theater. The Byham family of Pittsburgh made a major naming gift for a 1995 renovation, and it has been the Byham Theater since.

In 1999, the PCT's 650-seat O'Reilly Theater opened as the permanent home of the Pittsburgh Public Theater. The same year, the 23,000-square-foot (2,100 m2) Agnes R. Katz Plaza was unveiled. The theater features a 25-foot (7.6 m) bronze fountain designed by sculptor Louise Bourgeois and the work of landscape architect Dan Kiley. Also during 1999, artists Robert Wilson and Richard Gluckman were selected by the PCT to create a series of public art projects in the Cultural District.

PCT's first "President & CEO", selected by Jack Heinz, was Carol Brown, who managed the organization from 1986 until 2000. In 2001, J. Kevin McMahon was named President and CEO of the PCT. 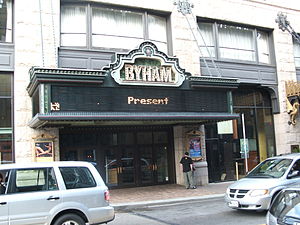 PCT presented the Quebec Festival and the inaugural Pittsburgh Festival of Firsts in 2004. It also turned an adult bookstore at 812 Liberty Avenue into SPACE, a gallery showcasing regional artists’ work, and purchased 937 Liberty Avenue to be utilized by local arts organizations as an office space and as a flexible performing and visual arts venue.[9] 2004 was also the first year the PCT organized a quarterly Gallery Crawl in the Cultural District, a free arts open house.

On April 18, 2012, Kenneth Milani resigned from the position of chairman of the PCT's board. The organization's Executive Committee accepted the resignation from Milan, who had been chairman since 2005. Milani, the CEO of Highmark, had been charged in March 2012 with assault and trespassing; the incident involved the husband of Highmark employee, Melissa Myler, with whom Milani had been romantically connected.[10] Veronica Corpuz, spokesperson for the PCT, informed the media that the Executive Committee had appointed attorneys Carolyn Duronio and Chuck Queenan as Milani's interim replacement until a new chairman was found.[11]

The PCT has seven public art projects on display year-round in the Cultural District, Pittsburgh. They include the following: