PICT (Formerly known as Pittsburgh Irish & Classical Theatre) was founded in 1996 by Andrew S. Paul and Stephanie Riso in Pittsburgh. PICT has emerged as a significant contributor to the cultural fabric of Pittsburgh with almost 2,000 loyal season subscribers, and annual attendance of over 23,000. A constituent member of Theatre Communications Group (TCG), PICT has garnered a yearly position on the Pittsburgh Post-Gazette's list of the city's Top 50 Cultural Forces. The organization's productions are consistently ranked among the year's best by the critics of the Post-Gazette, Pittsburgh Tribune-Review and Pittsburgh City Paper. PICT was named Theatre of the Year-in both 2004 [1] and 2006 [2] by the critics of the Pittsburgh Post-Gazette. Following the 2007 season, feature actor David Whalen was named the Pittsburgh Post Gazette's 24th theatrical Performer of the Year.[3] As of October 15, 2014, PICT has produced 89 main stage shows, including five world premieres, seven U.S. premieres, thirty-eight Pittsburgh premieres and four festivals.

In 2013 Alan Stanford was named the Artistic and Executive Director. PICT performs in the Stephen Foster Memorial building - a City of Pittsburgh and Pennsylvania state Historical Landmark located on Forbes Avenue on the campus of the University of Pittsburgh. 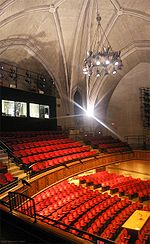 In 2015 PICT introduced it's "Downtown Series" presenting two productions at the Peirce Studio in the Trust Arts Education Building.