From Infogalactic: the planetary knowledge core
(Redirected from Pittsburgh Metropolitan Area)
Jump to: navigation, search
This article is about the region. For the core city, see Pittsburgh.

The Pittsburgh metropolitan area (also called Greater Pittsburgh, Southwestern Pennsylvania or the Pittsburgh Tri-State)[2] is the largest population center in both the Ohio River Valley and Appalachia. The metropolitan area consists of the city of Pittsburgh in the Commonwealth of Pennsylvania and surrounding counties. By many definitions the area extends into the U.S. states of West Virginia and Ohio.[3][4][5] The larger "tri-state" region is defined by the U.S. Census as the Combined Statistical Area (CSA) while definitions of the Metropolitan Statistical Area (MSA) are within Pennsylvania.[6]

The area is renowned for its industries including steel, glass and oil; its economy also thrives on healthcare, education, technology, robotics, financial services and the film industry. The region is an emergent area for oil and natural gas companies' Marcellus shale production.[7] The city is headquarters to major global financial institutions including PNC Financial Services (the nation's fifth-largest bank), Federated Investors and the regional headquarters of BNY Mellon. The region is also the 21st largest port in the United States with almost 34 million short tons of river cargo for 2011, the port ranked 9th largest in the U.S. when measured in domestic trade.[8] Since 1954 suburban Boyers, Pennsylvania has been home to one of the world's largest archives including CORBIS images, and Federal documents, since 1998 Iron Mountain Incorporated has used the complex as its main facility. 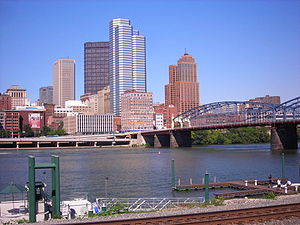 The MSA had a 2012 population of 2,360,733[9] and has a land area of 5,343 sq. miles, while the CSA had a 2012 population of 2,661,369.[10] Pittsburgh is part of the Great Lakes Megalopolis containing an estimated 54 million people, while many residents also consider themselves part of the Mid-Atlantic coastal region of Virginia to New York. It is classified as Northeast by the U.S. Census with the West Virginia and Ohio components of the CSA being classified as South and Mid-west respectively.[11] The entire MSA and CSA are within the Congressional Appalachian Regional Commission's definition of Appalachia.

The area's media market extends to 15 counties in Pennsylvania, Maryland and West Virginia. The region is also sometimes defined as reaching into the southwestern New York State county of Chautauqua the western Maryland counties of Garrett and Allegany as well as the majority of West Virginia, all of Western Pennsylvania and the east-central counties of Ohio.[12][13][14] 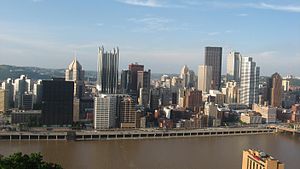 Since the U.S. Census officially began "metropolitan" definitions in 1950, the original counties included were: Allegheny, Westmoreland, Washington and Beaver.[15]

2013 saw the combined area grow as both Indiana County, Pennsylvania was added and the counties of Jefferson in Ohio and Brooke and Hancock in West Virginia were added.[6]

The Regional Industrial Development agency (RIDC) has worked across county lines as early as 1967.[17]

Note: All census-designated places are unincorporated. 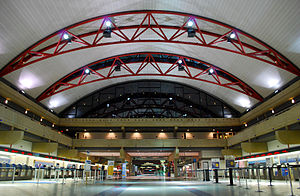 Pittsburgh International was the fortress hub of US Airways from 1952 to 2005 with over 500 daily departures to more than 110 destinations in 2000. By 2007, fewer than 70 departures to 21 destinations remained.[22] In 2007, US Airways did select the airport for its new $25 million, 27,000 sq ft (2,500 m2), 600-employees-strong Global Flight Operations Center. Since being de-hubbed the airport has seen expanded service from JetBlue, Southwest Airlines and Delta Air Lines' direct trans-Atlantic service to Paris.

Arnold Palmer Regional Airport offers commercial service via Spirit Airlines to the Carolinas, Florida and Texas. Palmer has had commercially scheduled air service since the 1980s.

Allegheny County Airport (IATA: AGC) in suburban West Mifflin, Pennsylvania, is the area's largest general aviation airport. The historic landmark, art deco terminal was the main passenger airport for the area until 1952. Allegheny opened in 1931 as the nation's third largest and first with "hard surface" runways.

The Port of Pittsburgh ranks as the 21st largest port in the United States with almost 34 million short tons of river cargo for 2011, the port ranked 9th largest in the U.S. when measured in domestic trade.[8]

The Port Authority of Allegheny County (PAT) is the largest mass transit service in the metro area and includes a 26-mile subway/light rail system, all serving the central core. This system is complimented by BTA and Town & Country to north destinations, BCTA and NTC to northwest destinations, WCTA and IndiGo to eastern destinations, WCT, MMVTA and FACT serving southern destinations. The University of Pittsburgh Transportation System also provides services in the eastern core of the metropolitan area while Mountain Line Transit serves the city, western suburbs and an express route south to Morgantown, West Virginia.

A metro map of all fixed route transit routes for Pennsylvania counties can be found here.[23]

Amtrak serves the region with stops at Penn Station in Downtown Pittsburgh, Connellsville to the southeast and both Greensburg and Latrobe to the east.

Freight rail is a major industry for the area with the Pittsburgh Line and the Conway Yard among other infrastructure serving the region.

Both the Greyhound Lines and Megabus serve the area. 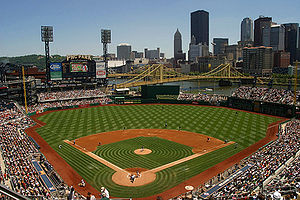 The Pittsburgh area served as a launchpad for the professionalization of both American football and ice hockey in the 1890s and 1900s. The first professional player (William Heffelfinger) played for a Pittsburgh football team in 1892, which was followed by the first open professional (John Brallier), the first all-professional team (the Latrobe Athletic Association), and a participant in the first all-professional league (the Pittsburgh Stars of the first National Football League). In the case of ice hockey, the Western Pennsylvania Hockey League was the first hockey league to pay its players in 1901, eventually merging into the first fully pro league, the International Professional Hockey League, in 1904. Professional hockey in Pennsylvania predated the professionalization of the game in Canada (where it eventually came to dominate in the early 20th century) by four years.

As of 2013, the region is home to three "major league" franchises:

It also has several minor league teams including:

NCAA Division I sports also play a key role in the region with the University of Pittsburgh and Duquesne University fielding football and basketball teams.

The regions rivers have hosted the Bassmaster Classic and Forrest Wood Cup and the city has enjoyed having one of only two teams to host the Major League Baseball All Star Game a record eight times. The area has also hosted the NHL All Star Game, NHL Winter Classic, Senior Olympics, NHL Entry Draft, AHL All Star Game, NCAA Tournament and has been selected as the site of the 2012 Frozen Four.

Private Schools exist in surrounding counties such as Westmoreland, Washington,

Pittsburgh narrowly falls within the borders of the Northeastern United States as defined by multiple agencies of the US Government, but the Pittsburgh Combined Statistical Area extends into both the Southern United States (West Virginia) and the Midwestern United States (Ohio) due to the fact that the borders of these three regions meet only 30 miles (48 km) from the city proper. Pittsburgh also belongs to the Great Lakes Megalopolis, a collection of primarily Midwestern cities like Detroit, Chicago, and Cleveland, reflecting Pittsburgh's stronger socio-economic connections to Ohio than eastern Pennsylvania.[24][25]

Joseph Scarpaci, professor emeritus of geography at Virginia Tech, has described Pittsburgh as having "one foot in the East...and the other in the Midwest".[26]:1 Barbara Johnstone, professor of rhetoric and linguistics at Carnegie Mellon University, ascribes this isolation and idiosyncratic cultural identity of the region to the difficulty of moving through the Allegheny Mountains and the Allegheny Plateau: "The Pittsburgh area was sort of isolated. It was very hard to get back and forth across the mountains. There's always been a sense that Pittsburgh was kind of a place unto itself—not really southern, not really Midwestern, not really part of Pennsylvania. People just didn't move very much."[33]

In his 2009 book The Paris of Appalachia, Pittsburgh Post-Gazette writer Brian O'Neill meditates on this aspect of Pittsburgh's regional and cultural ambiguity. The title of the book is intentionally provocative:

"The Paris of Appalachia" some have called Pittsburgh derisively, because it's still the largest city along this gorgeous mountain chain that needs a better press agent. I've long felt we should embrace that title, though few are with me. Several tried to talk me out of slapping it on the cover, but were we called "The Paris of the Rockies," we wouldn't run from it. Sometimes we're so afraid of what others think, we're afraid to say who we are. This city is not Midwestern. It's not East Coast. It's just Pittsburgh, and there's no place like it. That's both its blessing and its curse.[27]:13

Historically, Pittsburgh has been grouped in the "rust belt";[34] however, reflective of the rebound of the region within the last generation, the metro area has come to be associated with the newly rebranded "Great Lakes Basin" gaining representation in the Great Lakes Metro Chamber Coalition,[35] while the "America 2050" organization claims that Pittsburgh is one of the "principal cities" of the Great Lakes Megalopolis[36] despite the fact that the city is about 120 miles (190 km) from Lake Erie.

Pittsburgh's association with the Great Lakes region is due in part to its economic, demographic and commuter connections to Great Lakes cities like Cleveland, Erie, Toledo and even Detroit. Christopher Briem, an economist at the University of Pittsburgh's University Center for Social and Urban Research, has noted that southwestern Pennsylvania is "far more interconnected" with northeastern Ohio than it is with the eastern half of Pennsylvania, and that the industries of Pittsburgh are primarily linked to Ohioan cities such as Youngstown, Akron, and Cleveland, not to Pennsylvanian cities such as Allentown, Scranton, or Philadelphia.[24] He notes that, conversely, the population centers of northeastern Ohio are primarily connected with Pittsburgh and only secondarily connected to the state capital of Columbus. Briem argues that "In so many ways the state boundaries we think of as important are no more than lines on a map."[24] In recognizing their economic interdependence, Briem has popularized the term "Cleveburgh" to refer collectively to the cities of Cleveland and Pittsburgh, along with the smaller towns dotting the corridor of I-76 between the cities.[24][37][38][39][40] Robert Lang and Arthur Nelson of the Metropolitan Institute at Virginia Tech also identify the region between Cleveland and Pittsburgh as being an interconnected "megapolitan area" and refer to it as the "Steel Corridor".[41]

The scope of Pittsburgh's metropolitan influence on the surrounding area is of more than just academic interest. For example, the organization "Power of 32" focuses on addressing the issues of the 32-county metropolitan area roughly centered on Pittsburgh—a region which includes portions of Pennsylvania, Ohio, West Virginia, and Maryland. Despite being divided into four states and three Census Bureau—defined regions, this area functions as an interdependent economic region.[42] Power of 32 asserts that "[t]he 32-county region has common challenges and opportunities in the global economy, but is larger than the scope of any one single political entity, authority, or organization",[43] and that "[t]he only thing we find at artificial boundaries are problems, not solutions."[44] Power of 32 is supported in its efforts by "30 to 40 other foundations"[42] and funded by several Pittsburgh-area endowments including the Richard King Mellon Foundation and The Heinz Endowments.[42]