Pittsburgh Mills was conceived and originally developed by the Mills Corporation, now Simon Property Group. On December 30, 2006, it was announced that the Mills Corporation sold its stake in Pittsburgh Mills to its partner in the project, Zamias Services, Inc. of Johnstown.[2][3] Because of this, Pittsburgh Mills is currently the only Mills-branded mall that is neither owned or managed by Simon in the United States. Vaughan Mills near Toronto and the recently opened CrossIron Mills outside Calgary, Alberta, are the only other Mills-type malls that are not owned or managed by Simon. To date, it is the last Mills mall built in the United States.

Although the typical Landmark Mills mall is synonymous with outlet shopping, Pittsburgh Mills is the only center to offer an entire lineup of full-price retailers that otherwise could be found in a traditional enclosed mall. The reason for this goes back to 1981, when developer Zamias Services, Inc. of Johnstown, planned to develop a regional mall on the Frazer Township site. Legal setbacks and financial difficulties had postponed the project for many years, until the Mills Corporation announced in 2002 that they would partner in conjunction with Zamias to build a retail and entertainment complex on the site.[5]

It consists of two components. The first of these, named the Galleria at Pittsburgh Mills, is the 1,100,000-square-foot (100,000 m2) indoor component of the complex which is divided into five themed neighborhoods corresponding to various Pittsburgh landmarks and cultural icons. One lap around the entire mall is about 1 mile in length, making it a popular spot for mall walkers. It features Cinemark Theatres including IMAX, Dick's Sporting Goods, H&M, ITT Technical Institute, J.C. Penney, Macy's, and, formery, Sears Grand, which is a contemporary superstore concept with a limited supermarket, clothing, electronics, and automobile departments. It also has over 150 shops, services, attractions, and eateries, including a large food court.

Two children's play areas are also located within the center, located in the cut-through corridor near the food court.

The space occupied by the former Lucky Strike Lanes bowling alley was quickly replaced by Dingbats, Abate Seafood and a banquet hall called Royal Gatherings, both entities owned by the Trinity Select Group. All three are now out of business. 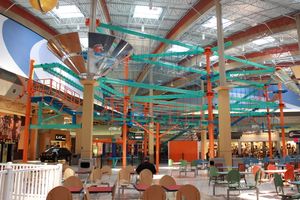 The second component is an adjacent shopping center called the Village at Pittsburgh Mills. It includes several big-box stores such as a Walmart, Sam's Club, Lowe's Home Improvement Warehouse, Best Buy, and PetSmart, as well as many popular restaurants, and a Springhill Suites by Marriott hotel. Another strip area in this complex includes Ross Dress For Less, Michaels Arts and Crafts, Office Max, Catherine's Plus Sizes, Famous Footwear, and the first Sonic Drive-In in Western Pennsylvania. The Village contains a total of 925,000 square feet (85,900 m2) of store space and over 30 retailers.

Sears announced that the Sears Grand at Pittsburgh Mills would be closing in mid-January 2015. Jo-Ann Fabrics were taking over the old spot from Borders and will open a store in February 2015.

In mid April 2015 the mall constructed a Sky Trail that now occupies a corner of the food court in hopes to build up entertainment and business. The corner was previously vacant as a staging area for small pageants and school band concerts.