The Pittsburgh Police (PBP), officially the Pittsburgh Bureau of Police, is the largest law enforcement agency in Western Pennsylvania and the third largest in Pennsylvania. The modern force of salaried and professional officers was founded in 1857 but dates back to the night watchmen beginning in 1794, and the subsequent day patrols in the early 19th century, in the then borough of Pittsburgh. By 1952 the Bureau had a strength of 1,400 sworn officers[2] in July 1985, 1,200[3] and by November 1989, 1,040.[4]

The Pittsburgh Bureau of Police is part of the Pittsburgh Department of Public Safety and is headed by Chief Cameron McLay appointed by Mayor Bill Peduto and approved by City Council. The Chief of Police is the top law enforcement agent of the city of Pittsburgh. In the Chiefs council are the positions of

Reporting directly through the Deputy Chief of Police to the Chief are the three active units of the Police Bureau: Operations, Investigations, and Administration. Each one is headed by an Assistant Chief.

The original headquarters were at Sixth Avenue and William Penn Way in downtown. In 1918 it moved into the Pittsburgh City-County Building, 1925 to Water Street,[5] 1960s Grant Street Public Safety Building, Western Avenue Northside.

Headed by the Assistant Chief of Operations, this unit is the most visible arm of the Pittsburgh Police Bureau. It consists six zones (the updated form of precincts) with each zone being supervised by the zone commander, as well as all zone patrol and response operations, SWAT team, Traffic patrol, and Impound. This is also the unit that does community policing.

The six Pittsburgh Police zones are:[6]

In 1918 the city debuted a mounted squad, having had some mounted officers as early as 1906. Police motorcycles were first used by the bureau starting in 1910.[5]

Headed by the Assistant Chief of Investigations Maurita Bryant, this unit overlays the operations staff with the detective and inspector corps of the Police Bureau. Its detective divisions are broken down into the following:

Pittsburgh Police officers are members of the local Lodge (branch) of the Fraternal Order of Police.

Headed by the Assistant Chief of Administration, this is the least visible unit of the bureau but one that is possibly the most essential. It consists of eight major divisions.

Ranks of the Pittsburgh Police

From 1901 to the early 1990s Pittsburgh Police were unique in having a "trial board" system of discipline.[7]

In 1996, after the deaths of two African-American men in Police custody, the ACLU and the NAACP filed a class action lawsuit against the Pittsburgh Bureau of Police, alleging a pattern of civil rights abuses. After an investigation, the U.S. Justice Department joined the suit in January 1997, stating "that there is a pattern or practice of conduct by law enforcement officers of the Pittsburgh Bureau of Police that deprives persons of rights, privileges, and immunities secured and protected by the Constitution and laws of the United States".[8]

After a brief court challenge, the City entered into a consent decree with the federal government in April 1997 that outlined the steps that it would take to improve its conduct. The decree was lifted from the Police Bureau in 2001, and from the Office of Municipal Investigation in 2002.[9] Community activists in Pittsburgh successfully used a referendum to create an independent review board in 1997.[10] A study commissioned by the U.S. Department of Justice in 2001 found that 70% of Pittsburgh's African-American residents believe it either "very common" or "somewhat common" for "police officers in Pittsburgh to use excessive force" and that only 48% feel that the Police are doing a "very good" or "somewhat good" "job of fighting crime", while 77% of white residents responded so.[9]

In February 2013, the FBI and IRS seized boxes of documents from police headquarters and the independent police credit union concerning thousands of deposits and withdrawals of taxpayer money from unauthorized accounts.[11][12][13] Allegations have been made against former Chief Nate Harper, who was forced to resign on February 20, 2013 due to the FBI and IRS investigations. On March 22, a Federal Grand Jury indicted Harper for stealing over $31,000 in taxpayer money as well as not filing personal income tax returns for years 2008-2011. Harper had various checks deposited into these unauthorized secret accounts that were skimmed off a police fund, and then he used a debit card to withdraw cash as well as use the debit card to spend lavishly on food and alcohol in high-end restaurants, buy a satellite radio, gift cards, perfume, and even an oven upgrade. The full indictment was published by local media.[14] 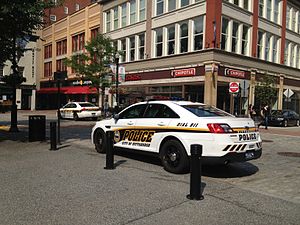 Two Pittsburgh Police vehicles parked at Market Square. In the foreground, a Ford Taurus Police Interceptor with the fleet's new livery, while in the background is a Chevrolet Impala displaying the Bureau's old livery.

Officers generally wear a very dark navy blue almost appearing to be black uniform. Officers with the rank of lieutenant and above no longer wear white uniform shirts, as all officers wear a navy blue uniform shirt, and white shirts and dress blouses are reserved for ceremonial occasions. SWAT and Tactical units wear olive drab green uniforms. Name tags are either embroidered or the traditional nameplate. Some officers will wear a very dark navy blue/black tie, but this is not a requirement for normal duties. They will also sometimes wear a traditional service cap, with a unique Sillitoe Tartan (explained below). Officers are equipped with O.C. spray (Mace), police radio, duty belt, handcuffs, extra ammunition, service pistol, bulletproof vest, baton, first aid kit, and flashlight. Many officers are now carrying tasers.[15]

The new Chief, Public Safety Director, and Mayor along with a department uniform committee have been making a myriad of changes to uniforms and equipment. One of the most visible changes being a black crew neck undershirt in lieu of the previous V-neck worn with the summer short sleeve shirts. This was a compromise after officers were originally told they would have to wear ties with the short sleeve shirts. A controversial change occurred in 2014 when officers were no longer permitted to wear outer ballistic vests as the administration deemed it looked too 'aggressive'. This was reversed and officers are now permitted to wear external carriers. The department is planning to implement the use of body cameras on officers, and are already on some officers in a limited trial basis.

Service pistols are usually Glocks. The officer must purchase their own service pistol. If officers were hired with the bureau in or prior to the year 1992, they have the option to carry a revolver on duty. Officers hired in 1993 and after must carry a semi-automatic pistol on duty. Prior to 1985 all officers could carry was the .38 caliber 5 or 6 shot revolvers. In 1985 the bureau phased in the use of 9 mm semi-automatics only to the Special Operations and Narcotics units. In early 1990 all officers were allowed and encouraged to carry 9 mm semi-automatics, with the training and ammunition change over costing the city roughly $2 million.[4]

The Pittsburgh police wear hats with checkered bands, which are dark navy blue and gold in color, popularly known as the "Sillitoe Tartan" and named after its originator, Percy J. Sillitoe, Chief Constable of Glasgow, Scotland, in the 1930s. While the checkered band is a common police symbol in the United Kingdom, Australia and some European countries, the Chicago Police Department, Cook County Sheriff's Police, the Allegheny County Sheriff's Office, and the Pittsburgh Bureau of Police are the only police forces in the United States that have adopted it as part of their uniforms.

The Pittsburgh Police have several honors and medals including:

The highest honor of any Pittsburgh Police officer. It is awarded only for acts occurring in the most exceptional of circumstances. Recognizing acts of bravery and heroism in the protection of life, while taking on great personal risk and without compromising any bureau mission.

Awarded along with the Medal of Valor.

Open to members and non-members of the Pittsburgh Police Bureau who have displayed initiative in performing tasks above and beyond that which is required in a professional manner. In 2007 38 officers received Commendations.

To those who in the course of criminal apprehension efforts, sustained serious injury, disability or wounds. In 2007 three officers received this award.

Open to all officers who have distinguished themselves in exhibiting professional excellence in their tasks or duties. As well as those that contribute significantly towards improving the objectives of the bureau. In 2007 sixteen officers received this award.

Open to all officers and non-members who performed a task of bravery or heroism above and beyond the call of duty and in the face of great personal risk in life-saving or life-protecting circumstances. In 2007 nine officers were recognized.

Selected by committee of the Chief, Deputy Chief and three Assistant Chiefs from a single nomination from each zone commander, there can be more than one selected per month.

Selected from all officers of the months and all officers receiving commendations through the year by committee of the Chief, Deputy Chief and all three Assistant Chiefs.

On April 4, 2009, three Pittsburgh police officers were killed in the line of duty while responding to a domestic disturbance in the Stanton Heights area of the city. The officers, all from the Zone 5 station are Eric Kelly, a 14-year veteran of the Bureau, Stephen Mayhle, and Paul Sciullo II, both two-year veterans.[17] Two other officers were injured. Timothy McManaway was shot in the hand trying to help Officer Kelly, and Brian Jones broke his leg when a fence collapsed.[18] Police Chief Nathan Harper said Officer Mayhle was married and had two children; Officer Kelly was married and had three children; and Officer Sciullo was single.

The city of Pittsburgh is well known throughout the world as having its official colors not only on everything from the official seal and flag to fire hydrants, fire trucks and police cars, but also shared by all of its pro sports teams, and more recently featured in rap/rally videos. Although the Pittsburgh Steelers are the only team to have these colors throughout their entire history (starting in 1933), the Pittsburgh Pirates (1948-present) and the Pittsburgh Penguins (1967, 1975, 1980–present) have for generations also been associated with "black and gold". However the very first team in the city's history to associate with its official seal/flag colors were the original NHL franchise Pittsburgh Pirates. The police department of Pittsburgh was instrumental in establishing the "black and gold" tradition for the regions sports teams, in that the teams owner, attorney James Callahan, asked his police officer brother for used and surplus seals and emblems from old police uniforms in 1925. From those donated "logos" the tradition of "black and gold" for the city's franchises was born.[19][20]

The Pittsburgh Police have been featured in many television and film portrayals. Among them: