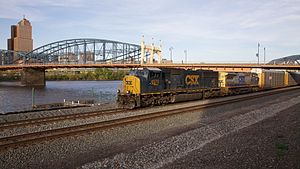 A CSX freight train passes under the Smithfield Street Bridge in 2013.

The line northwest of Pittsburgh opened in 1879 as part of the Pittsburgh and Lake Erie Railroad. The rest of the line, southeast from Pittsburgh, was opened in 1883 by the Pittsburgh, McKeesport and Youghiogheny Railroad.[2] The latter company was leased by the P&LE. In 1934, the Baltimore and Ohio Railroad began operating through trains via trackage rights over the P&LE between McKeesport (slightly north of the current beginning of the Pittsburgh Subdivision until the bridge at Sinns opened in 1968[3]) and New Castle, leaving the P&W Subdivision for local trains only.[4] Eventually the P&LE, which had been jointly owned by CSX and Conrail, was merged into CSX.