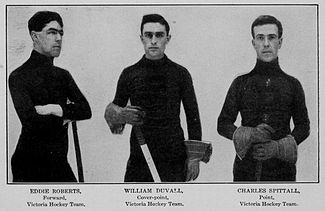 For the 1902-03 season, the Victorias were added to the WPHL making it a four team league. The team was made up of players from Ottawa, Canada, enticed to come to Pittsburgh. The Victorias were able to add Stanley Cup winner Bruce Stuart to their team, giving the future Hall of Famer his start in professional hockey. That season, Stuart led the WPHL with 16 goals in his first pro season and was named to the First All-Star team.[2] William Duval, the 1902 captain of the Ottawa Silver Seven, also made the trip to Pittsburgh and began his professional career with the Victorias. Ottawa's Chic Henry, Charles Spittal and the Sixsmith brothers, Garnet and Arthur, also played for the Victorias. Arthur, the previous season, played on the Keystones' championship team. While Garnet would one day score 11 goals in a game in Pittsburgh, considered to be a record for the Duquesne Gardens.[3]

In 1904 the Victorias won the WPHL title and played Houghton, Michigan's Portage Lakes Hockey Club for the "American Championship" that year.[1] The Victorias lost the three game series two games to one. The team disbanded later that year when the WPHL consolidated its players into the Pittsburgh Professionals and competed in the International Professional Hockey League. Several of the Victorias' players went on to play with the Professionals, such as William Duval, Ed Roberts, Arthur and Garnet Sixsmith and Charles Spittal.