Pittsburgh in the American Civil War 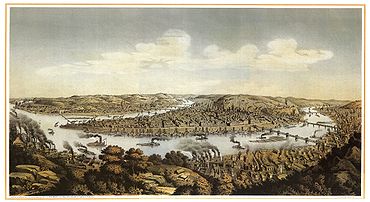 Lithograph showing bird's-eye view of the city of Pittsburgh, Pennsylvania from Mt. Washington.

Pittsburgh, Pennsylvania was a thriving and important city during the American Civil War, and provided a significant source of personnel, war materiel, armament, ammunition, and supplies to the Union Army. Situated at the confluence of the Monongahela, Allegheny and Ohio rivers, Pittsburgh was an important transportation hub for both riverine and rail transport, as well as overland via its system of roads.

The antebellum iron industry in Pittsburgh had thrived, fueled by access to coal, iron ore, and other raw materials, as well as transportation routes to get the iron to markets. In 1859, the Clinton and Soho iron furnaces introduced coke-fired smelting to the region. Within three years, the growing needs of the military effort during the Civil War had boosted the city's economy with increased production of iron and armaments, especially at the Allegheny Arsenal and the Fort Pitt Foundry.[1] Arms manufacture included ironclad warships and the world's first 21" heavy artillery gun.[2] By war's end, over one-half of the steel and more than one-third of all U.S. glass was produced in Pittsburgh.[3]

The Allegheny Arsenal was the primary military manufacturing facility for U.S. Army accoutrements, as well as saddles and other cavalry equipment. In addition, the sprawling factory produced as many as 40,000 bullets and cartridges every day (more than 14 million per year), supplying between 5 and 10 percent of the Army's annual small arms ammunition requirements. A significant explosion on the afternoon of September 17, 1862 (coincidentally on the same day as the Battle of Antietam in central Maryland), killed 78 factory workers, mostly young women.

Five Ellet-class rams were converted from civilian towboats at Pittsburgh. In addition, four ironclads were built from the keel up—the USS Manayunk, Marietta, Sandusky, and Umpqua. Pittsburgh's rolling mills supplied the armor for many of the ironclads that were built in New York City and Philadelphia for the Union Navy.

The city's 110-year run of hosting a major stock exchange can be traced to the oil traded at Pittsburgh during the war with the creation of Thurston's Oil Exchange on Fourth Avenue, downtown.

Both the Confederate military led Morgan's Raid from the west and Jones-Imboden Raid from the south came within a day's march of the city before being captured or retreating.

Concerned that the Confederate Army might target Pittsburgh for invasion, the U.S. War Department established the Department of the Monongahela to provide a formal Federal military presence in Western Pennsylvania during the Gettysburg Campaign, with departmental headquarters in Pittsburgh. The Army dispatched Maj. Gen. William T. H. Brooks to organize the defenses of Pittsburgh. Brooks authorized the construction of several miles of earthworks and a series of small forts to control access to the city. He suspended liquor sales, and put the citizenry to work digging trenches and erecting forts. Bars and saloons were asked to close but many refused.

Among these bastions was Fort Robert Smalls, a redoubt built by free blacks on McGuire's Hill at the mouth of Becks Run in Arlington Heights.[6] Another of these emergency fortifications was the circular earthwork known as Fort Laughlin, constructed by the employees of Jones and Laughlin Steel on Ormsby's Hill, now part of Arlington Park on Arlington Avenue. It was also known as Fort McKinley or Fort Ormsby.[7] Concurrent with Fort Laughlin, Jones and Laughlin Steel employees constructed Fort Jones, named for the mill's co-owner, Benjamin Franklin Jones . Fort Jones occupied the top of a hill in Mount Oliver.[8] It was sometimes known as Fort Jackson, in honor of Brig. Gen. Conrad Feger Jackson, killed in the Battle of Fredericksburg, Virginia, in December 1862.[9][10] There was also Fort Black, in Greenfield.

The greater Pittsburgh area was the birthplace or long-time residence of several Union army and navy officers, as well as some leading politicians of the era.

Among the recipients of the Medal of Honor for gallantry in action during the war were Alexander Kelly, a free black who fought in the 6th U.S.C.T..

The Soldiers and Sailors National Military Museum and Memorial is a National Register of Historic Places landmark. It is the largest memorial in the United States dedicated solely to honoring all branches of military veterans and service personnel.

In 2014 a small park was proposed on Mount Washington overlooking Saw Mill Run where remains of earthwork defenses can still be seen.[11]