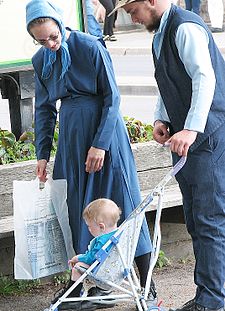 Plain dress is a practice among some religious groups, primarily some Christian churches in which people dress in clothes of traditional modest design, sturdy fabric, and conservative cut. It is intended to show humility and preserve communal separateness from the rest of the world.

Among the Amish and other plain groups, plain dress is not considered to be a costume but instead is an expression of their religious philosophy.[3] Plain, simple dress is governed by an unwritten code of conduct, called "ordnung" among Anabaptists, which is strictly adhered to by the Amish and Old Order Mennonites.[4]

Other groups adhering to a conservative dress code include Buddhist and Christian monks, Orthodox Jews and Muslim women, but these forms of dress normally are not called "plain dress".

Plain dress is attributed to reasons of theology and sociology.[2] In general, plain dress involves the covering of much of the body (often including the head, forearms and calves), with minimal ornamentation, rejecting print fabrics, trims, fasteners, and jewelry. Non-essential elements of garments such as neckties, collars, and lapels may be minimized or omitted. Practical garments such as aprons and shawls may be layered over the basic ensemble. Plain dress garments are often handmade and may be produced by groups of women in the community for efficiency and to ensure uniformity of style. Plain dress practices can extend to the grooming of hair and beards and may vary somewhat to accommodate stages in the life cycle such as allowing children and older people more latitude.[5]

Within these general practices, distinctions abound. In some groups, for example, the women's preferred head covering is lacy or translucent; in others, it must be opaque.

The traditional plain dress worn by the Anabaptists and other religious groups has long sleeves with a set waist, long skirt, and no adornment. It denotes "utility, modesty, long wear and inconspicuousness", does not display any trademark, and is not dictated by fashion trends. Shawl, aprons, bonnets and cap are part of plain dress.[6]

Plain dressing Christians cite Paul's advice to the Romans, "Be not conformed to this world," as one Biblical basis for their distinctive dress. Other scripture passages counsel women to wear head coverings while praying (1 Corinthians 11:5), not to cut their hair (1 Corinthians 11:14-15), and for men not to shave or cut their beards (Leviticus 19:27).[7]

The rejection of extravagant clothing is further established in 1 Timothy 2:9-10[8][9]

[T]hat women adorn themselves in modest apparel, with shamefacedness and sobriety; not with broided hair, or gold, or pearls, or costly array; but (which becometh women professing godliness) with good works.

Plain dress may establish a sense of belonging within the community while also marking the group's members as different in the wider society. Some practitioners describe their dress as a protection from unwanted attention. Quaker minister Elizabeth Fry considered her plain dress to serve as "a hedge against the world", and "a sort of protector".[10] Marketing through the internet has these sites which propagate plain dress: "Quaker Jane", "Plain and Simple Headcoverings", "Rachel’s Seamstress Services" and "Mennonite Maidens".[2]

Simple dress, considered "sensible and useful" and necessary, is sometimes hard to find as the clothing market is dictated by fashion conscious people who consider plain dress dull.[11]

Dressing heroines in Victorian literature in plain dress is often assumed to be a way of making characters appear classless and sexless.[12] Others argue that authors like Charlotte Brontë, George Eliot, and Anthony Trollope use plain dress to highlight the marriageability of the character, sexualizing her by emphasizing the female body within.[12][13] Additionally, plain dress may signify a character's rejection of societal norms and willingness to leave the household to act on her desires.[12]