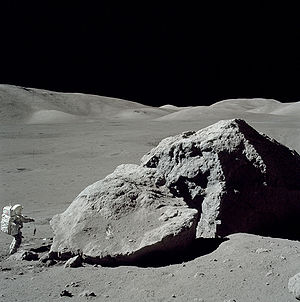 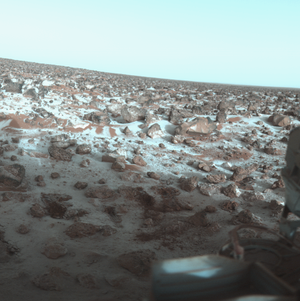 Surface of Mars as photographed by the Viking 2 lander December 9, 1977.

Planetary geology, alternatively known as astrogeology or exogeology, is a planetary science discipline concerned with the geology of the celestial bodies such as the planets and their moons, asteroids, comets, and meteorites.[1][2] Although the geo- prefix typically indicates topics of or relating to the Earth, planetary geology is named as such for historical and convenience reasons; applying geological science to other planetary bodies. Due to the types of investigations involved, it is also closely linked with Earth-based geology.

Planetary geology includes such topics as determining the internal structure of the terrestrial planets, and also looks at planetary volcanism and surface processes such as impact craters, fluvial and aeolian processes. The structures of the giant planets and their moons are also examined, as is the make-up of the minor bodies of the Solar System, such as asteroids, the Kuiper Belt, and comets.

Eugene Shoemaker is credited with bringing geologic principles to planetary mapping and creating the branch of planetary science in the early 1960s, the Astrogeology Research Program, within the United States Geological Survey. He made important contributions to the field and the study of impact craters, Selenography (study of the Moon), asteroids, and comets.[3]

Today many institutions are concerned with the study and communication of planetary sciences and planetary geology. The Visitor Center at Barringer Meteor Crater near Winslow, Arizona includes a Museum of planetary geology.[citation needed] The Geological Society of America's Planetary Geology Division has been growing and thriving since May 1981 and has two mottos: "One planet just isn't enough!" and "“The GSA Division with the biggest field area!"

Planetary geology uses a wide variety of standardised descriptor names for features.[4] All planetary feature names recognised by the International Astronomical Union combine one of these names with a more unique identifying name. The conventions which decide the more unique name are dependent on which planetary body the feature is on, but the standard descriptors are in general common to all astronomical planetary bodies. Some names have a long history of historical usage, but new must be recognised by the IAU Working Group for Planetary System Nomenclature as features are mapped and described by new planetary missions.[5] This means that in some cases names may change as new imagery becomes available,[5] or in other cases widely adopted informal names changed in line with the rules.[6] The standard names are chosen to consciously avoid interpreting the underlying cause of the feature, but rather to describe only its appearance.[4]