The longer a crop's harvest period, the more efficient plantations become. Economies of scale are also achieved when the distance to market is long. Plantation crops usually need processing immediately after harvesting. Sugarcane, tea, sisal, and palm oil are most suited to plantations, while coconuts, rubber, and cotton are suitable to a lesser extent.[1]

In the Thirteen Colonies, plantations were concentrated in the South. These colonies included Maryland, Virginia, North Carolina, South Carolina, and Georgia. They had good soil and almost year-round growing seasons, ideal for crops such as rice and tobacco. The existence of many waterways in the region made transportation easier. Each colony specialized in one or two crops, with Virginia standing out in tobacco production[2]

Planters embraced the use of slaves mainly because indentured labor became expensive. Some indentured servants were also leaving to start their own farms as land was widely available. Colonists tried to use Native Americans for labor, but they were susceptible to European diseases and died in large numbers. The plantation owners then turned to enslaved Africans for labor. In 1665, there were less than 500 Africans in Virginia but by 1750, 85 percent of the 235,000 slaves lived in the Southern colonies, Virginia included. Africans made up 50 percent of the South’s population.[3]

According to the 1840 United States Census, one out of every four families in Virginia owned slaves. There were over 100 plantation owners who owned over 100 slaves.[4]

Fewer than one-third of Southern families owned slaves at the peak of slavery prior to the Civil War. In Mississippi and South Carolina the figure approached one half. The total number of slave owners was 385,000 (including, in Louisiana, some free African Americans), amounting to approximately 3.8% of the Southern and Border states population. 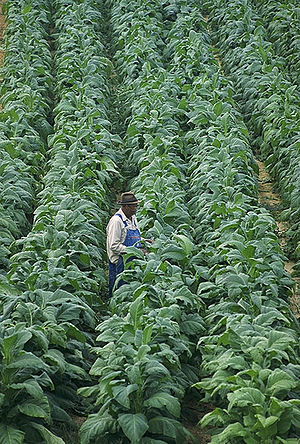 Enslaved Africans were brought from Africa by the English and other European powers, for their Western Hemisphere colonies. They were shipped from ports in West Africa to the New World. The journey from Africa across the Atlantic Ocean was called "the middle passage," and was one of the three legs which comprised the triangular trade among the continents of Europe, the Americas, and Africa.

By some estimates, it is said that some ten million Africans were brought to the Americas. Only about 6% ended up in the North American colonies, while the majority were taken to the Caribbean colonies and South America. A reason many did not make it to the colonies at all was disease and illness. Underneath the slave ship's decks, Africans were held chest-to-chest and could not do much moving. With this being said, there was waste and urine throughout the hold; this caused the captives to get sick and to die from illnesses that could not be cured.[5]

As the plantation economy expanded, the slave trade grew to meet the growing demand for labor.

Western Europe was the final destination for the plantation produce. At this time, Europe was starting to industrialize, and it needed a lot of materials to manufacture goods. Being the power center of the world at the time, they exploited the New World and Africa to industrialize. Africa supplied slaves for the plantations; the New World produced raw material for industries in Europe. Manufactured goods, of higher value, were then sold both to Africa and the New World. The system was largely run by European merchants[6]

Sugar has a long history as a plantation crop. The cultivation of sugar had to follow a precise, scientific system in order to profit from the production. Sugar plantations everywhere were disproportionate consumers of labor—often enslaved—owing to the high mortality of the plantation laborers. In Brazil, plantations were called casas grandes and suffered from similar issues.

The slaves working the sugar plantation were caught in an unceasing rhythm of arduous labor year after year. Sugarcane is harvested about 18 months after planting and the plantations usually divided their land for efficiency. One plot was lying fallow, one plot was growing cane, and the final plot was being harvested. During the December–May rainy season, slaves planted, fertilized with animal dung, and weeded. From January to June, they harvested the cane by chopping the plants off close to the ground, stripping the leaves, then cutting them into shorter strips to be bundled off to be sent to the sugar cane mill.

In the mill, the cane was crushed using a three-roller mill. The juice from the crushing of the cane was then boiled or clarified until it crystallized into sugar. Some plantations also went a step further and distilled the molasses, the liquid left after the sugar is boiled or clarified, to make rum. The sugar was then shipped back to Europe; and for the slave laborer, the routine started all over again.

With the 19th-century abolition of slavery, plantations continued to grow sugar cane, but sugar beets, which can be grown in temperate climates, increased their share of the sugar market.

Indigofera was a major crop of cultivation during the in the 18th century, in Venezuela, Guatemala—and Haiti until the slave rebellion against France that left them embargoed by Europe and India in the 19th and 20th centuries. The indigo crop was grown for making blue indigo dye in the pre-industrial age.

Mahatma Gandhi's investigation of indigo workers' claims of exploitation led to the passage of the Champaran Agrarian Bill in 1917 by the British colonial government.