From Infogalactic: the planetary knowledge core
Jump to: navigation, search
Not to be confused with Plaquemine, Louisiana.

Plaquemines Parish is part of the New Orleans–Metairie, LA Metropolitan Statistical Area. It was severely damaged in the aftermath of Hurricane Katrina in 2005, and in hurricane events in 2011.

The name "Plaquemines," in French Creole, was derived from the Atakapa word, piakimin, meaning the local fruit persimmon. The French used it to name a military post they built on the banks of the Mississippi River, as the site was surrounded by numerous persimmon trees. Eventually the name was applied to the entire parish and to a nearby bayou.

The oldest European settlement in the parish was La Balize, where the French built and inhabited a crude fort by 1699 near the mouth of the Mississippi River. The name in French meant "seamark", a tall structure of wood built as a guide for ships. By 1721 the French built one 62 feet (19 m) high.[4] A surviving map from about 1720 shows the island and fort, and the mouth of the river.[5]

As traffic and trade on the river increased, so did the importance of river pilots who were knowledgeable about the complicated, ever-changing currents and sandbars in the river. They lived at La Balize with their families. The village was destroyed and rebuilt numerous times, but it was abandoned for good after being destroyed by a September 1860 hurricane. The pilots moved upriver and built the settlement they named Pilottown, which reached its peak of population in the 19th century.[6] The river pilots' expertise continues to be critical, but now they generally live with their families in more populated areas. They stay at Pilottown temporarily for work.

An important historical site is Fort Jackson, built in 1822 as recommended by General Andrew Jackson, hero of the Battle of New Orleans in the War of 1812. In 1861, Fort Jackson served as an important Confederate defense for the city of New Orleans during the Civil War because it was at the mouth of the Mississippi River. The US Army used it as a training base during World War I, 1917-1918.

Plaquemines is one of only two parishes that have kept their same boundaries from the beginning of Louisiana's parishes in 1807 to today, the other being St. Bernard Parish.

Because Plaquemines Parish encompasses the last 70 miles (110 km) of the Mississippi River before it reaches the Gulf of Mexico, it is the site of several oil refineries, which rely on the shipping lanes for moving their product. The Mississippi River Delta of Plaquemines is also a base for assistance to offshore oil rigs. Plaquemines Parish was the first place in the United States where shippers used a container for cargo in foreign trade. The area is also known for having the most southern point in Louisiana, at just under 29 degrees north. To be further south in the United States, a person would have to be in Texas, Florida, or Hawaii.

The August 1901 Hurricane caused damage, including 4 feet of water in Buras.[7]

The Great Hurricane of 1915 devastated much of the Parish, with multiple levee breaches on both sides of the Mississippi, a 12-foot storm surge, and hundreds of deaths. Homelessness was widespread, and many people were reduced to starvation until charitable aid arrived.[8] The old Parish Courthouse in Pointe à la Hache was among the many buildings destroyed in the storm, but a new one was completed within the year.

In the early 1900s, Plaquemines was an exporter of citrus. Farmers used the railroads and the Mississippi to ship the large annual harvest to markets. Commercial fisheries, especially for oysters, have been important in the parish economy.

From 1919 to 1969, Plaquemines and St. Bernard parishes were effectively the domain of the political boss Leander Perez, who established a virtual dictatorship in the area.[9] He was notorious for fixing elections and enforcing strict racial segregation. Upon his death, his sons Leander Perez Jr. and Chalin Perez were elected as the dominant political figures of the parish as district attorney and parish president, respectively. Interpersonal feuding weakened the family's hold on power. After another decade, by 1980 political opponents had begun to win local elections.[9]

During the Great Mississippi Flood of 1927, city and state leaders used dynamite to breach a levee at Caernarvon, thirteen miles (19 km) below Canal Street, in order to save the city of New Orleans from flooding. This action resulted in the flooding of much of the less-populated St. Bernard and Plaquemines parishes, causing widespread destruction to agriculture and housing.

The Civil Rights struggle for African-Americans to become register voters in Plaquemines Parish begin in October 1946, under the guidance of Dr. Rev. Percy Murphy Griffin. With the Aid of Attorneys Earl Amedee and Louis Berry from New Orleans, Griffin and twenty-six African-Americans from Plaquemines Parish organized, (The Plaquemines Parish Civil and Political Organization, Inc.)to fight the racial barriers of Leander Perez. In the summer of 1953, from July through August, Plaquemines Parish was the site of a voter registration drive for African Americans organized by the Plaquemines Parish Civil and Political Organization, under the leadership of Dr. Rev. Percy Murphy Griffin. The organization filed class-action suits against Leander Perez and in 1953, several African-Americans became registered voters in Plaquemines Parish. In 1966 the organization led the fight to integrate the public schools in Plaquemines Parish. The movement also worked to get Seymourville and another small community included within the parish boundaries; the city was trying to exclude these majority-black communities to prevent black votes from being counted. Not all the work was done that summer; in October a black man was the first to register to vote in West Feliciana.[10] The Civil Rights Act of 1964 ended legal segregation, and the Voting Rights Act of 1965 authorized federal oversight and enforcement of voter registration and elections in jurisdictions with historic under-representation of elements of the population. After 1965, African Americans in Louisiana were able to participate again in the political system and exercise their constitutional rights.

In 1965 Hurricane Betsy damaged the area, flooding many buildings, including the Parish Courthouse, and causing nine deaths. Leander Perez sealed off the Parish from the outside world, while trying to control the distribution of state assistance.[11]

The parish has five other sites listed on the National Register of Historic Places, including Woodland Plantation, which has been depicted on the label of Southern Comfort liqueur since the 1930s. Woodland Plantation is an antebellum mansion located in West Pointe à la Hache, on the west bank of the Mississippi River. It is now operated as a bed and breakfast.

Hurricane Katrina struck Louisiana on August 29, 2005, resulting in one of the worst disasters in United States history; it severely damaged all of southeast Louisiana. Martial law was not declared in Plaquemines, contrary to many media reports, as no such term exists in Louisiana state law.[12] No place escaped without some damage, while most of Plaquemines, Orleans, and neighboring St. Bernard parishes were severely affected. The towns of Pointe à la Hache, Port Sulphur, Buras, Triumph, Empire, Boothville, Phoenix, and Venice suffered catastrophic damage.

Amid heavy rains accompanied by hurricane-force winds in excess of 120 mph (190 km/h) at initial landfall (with a Category 5 storm surge), the levees failed and broke. The storm surge which flowed in was more than 20 feet (6.1 m) high. Although a majority of the populace had complied with mandatory state evacuation orders, some did not, possibly because they were not able to. At least three residents died.

Plaquemines has a significant seafood industry. The parish exports millions of pounds of shrimp, crab, oysters, and fish annually. Plaquemines also has a vibrant citrus industry. The seafood and citrus industries have suffered somewhat in the wake of Hurricane Katrina in August 2005. About half the shrimping and shellfish fleet were lost. In January 2007, thousands of citrus trees went unpicked.[citation needed]

As of 2012, Plaquemines parish is the largest crude-oil producing parish in Louisiana. It produced over 14 million barrels in 2012.[20]

Plaquemines Port is one of the largest ports in the United States, handling mostly domestic traffic. The Plaquemines Port, Harbor & Terminal District is coextensive with the parish. It was created in 1954 by the legislature of Louisiana as a state agency. It is governed by a committee of the Plaquemines Parish Council, acting as the Port Board.[21]

Oil and gas continue to play a dominant role in the Plaquemines economy; however, there is a growing policy and resource trend in favor of renewable resources. The Parish government is working with public and private partners to invest in renewable energy, including hydrokinetic energy and wind energy. Plaquemines has a huge potential for hydrokinetic energy sites along deep bends in the Mississippi River. The flow of the river is 470,000 cubic feet per second at the Head of Passes during normal river stages and 1,250,000 during peak times.[22] Tidal turbines would be placed in deep bends of the river below seagoing and barge traffic. The turbines would also be located below the usual migrating routes of fish. Four companies intending to install turbines are in the regulatory and permitting stages.[23]

The potential installation of wind turbines at the mouth of the Mississippi River is also being considered.[24] The capacity of a wind source to produce energy is generally measured by Wind Power Density. Wind Power Densities are divided into seven Wind Power Classes. According to the American Wind Energy Association, Plaquemines has winds in specified areas that fall into a Wind Power Class of seven, which makes the Parish a particularly attractive location for wind turbine investment. Wind turbines would likely be placed at the mouth of the Mississippi, where winds are the strongest. Wind Energy Systems Technology has proposed to build a 12.5 MV wind farm in Barataria Bay off the coast of Plaquemines Parish. The energy would be sent to Myrtle Gove through an underground cable. The wind farm would be supplemented with natural gas turbines when wind speeds are either not sufficient enough or too robust to supply power. A similar proposal is being considered for the southern portion of the Parish.

Plaquemines Parish School Board operates the public schools of the parish. 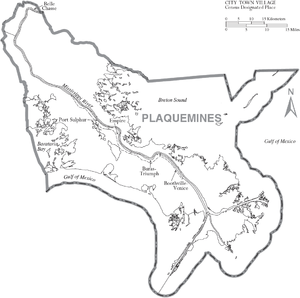 There are no incorporated areas within Plaquemines Parish. Communities not listed below include Dalcour, Myrtle Grove, Nairn, Naomi, Orchid, and Scarsdale.