The Plaza Hotel, located in the Midtown Manhattan neighborhood of the borough of Manhattan, New York City, is a landmark 20-story luxury hotel and condominium apartment building, owned by the Indian conglomerate, Sahara India Pariwar. With a height of 250 ft (76 m) and length of 400 ft (120 m) that occupies the west side of Grand Army Plaza, from which it derives its name, and extends along Central Park South in Manhattan. Fifth Avenue extends along the east side of Grand Army Plaza. The Plaza Hotel is recognized as a Historic Hotel of America by the National Trust for Historic Preservation.[3][4] 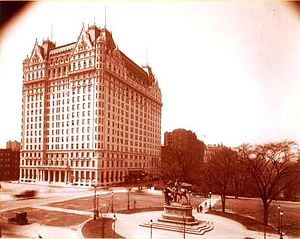 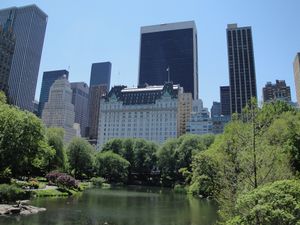 The Plaza Hotel and its International Modern style neighbors, as seen from across The Pond in Central Park

The hotel's main entrance at 768 Fifth Avenue faces the southern portion of Grand Army Plaza which commemorates the Union Army in the Civil War. Grand Army Plaza is in two sections, bisected by Central Park South. The section in front of the Plaza Hotel is centered by the Pulitzer Fountain, of Abundance by Karl Bitter, funded by the will of the newspaper publisher Joseph Pulitzer: the statue in the fountain is specifically Pomona, Roman goddess of orchards. The statue was posed for by Doris Doscher, also famous for posing for the Standing Liberty quarter. The north side of Grand Army Plaza, a corner cut out from Central Park, has Augustus Saint-Gaudens' part-gilded bronze equestrian statue of General Sherman.[5] Scholars Gate, behind Grand Army Plaza, provided one of the two original main entrances to the carriage drives of Central Park, the other being Merchants Gate at the Grand Circle, now Columbus Circle. On the south side of the Plaza (between 57th and 58th Streets) once stood the French Renaissance château of Cornelius Vanderbilt II, designed by George B. Post; rising behind its gated front court, it was the grandest of the Fifth Avenue mansions of the Gilded Age. Bergdorf Goodman occupies its site.

The Plaza Hotel offers its guests and residences many services including a butler on every floor, baby-sitting and concierges, a shopping mall, the Palm Court under the restored stained glass ceiling, the Champagne Bar located in the hotel lobby with views of Grand Army Plaza, the Edwardian Room, the Terrace Room, the Rose Club, the Grand Ball Room, the Plaza Food Hall by Todd English, as well as meeting rooms and conference rooms. The Grand Ballroom, Terrace Room and meeting spaces are currently managed by CPS Events, a joint venture between Delaware North Companies and the high end caterer Great Performances. The Oak Room, now closed, was another restaurant in the Plaza. 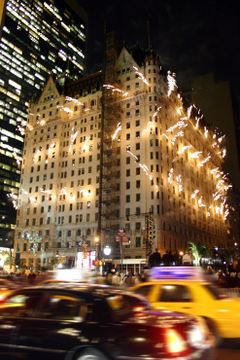 The Plaza Hotel turned 100 years old in 2007, celebrating with ceremonies and fireworks.

The Plaza Hotel is the second hotel of that name on the site. The French Renaissance château-style building was designed by Henry Janeway Hardenbergh and opened to the public on October 1, 1907. At the time, it cost $12.5 million to construct. When the hotel opened, a room at the Plaza Hotel was only $2.50 per night, the equivalent of $63 today. The same room costs over 15 times as much today.[6]

Alphonse Salamone joined the hotel in 1947, although later left to accept a position in San Juan at the Caribe Hilton. He returned the hotel and helped it out of hardship during the 1960s.[7] The Plaza Hotel was accorded landmark status by the New York City Landmarks Preservation Commission in 1969; it was designated a National Historic Landmark (NHL) in 1986.[2][8] The Waldorf-Astoria is the only other New York City hotel to be designated as a National Historic Landmark.

The hotel offers tours of its interior to the public.

Long the site for famous performers and guests, it has also been the meeting place for important political meetings. The nationally known singers Josephine Baker, Eartha Kitt, Liza Minnelli, Marlene Dietrich, Lena Horne, Kay Thompson, Sandler and Young, Ethel Merman, Shirley Bassey, Andy Williams, The Mills Brothers and Peggy Lee played the Persian Room; Miles Davis recorded a live album in the hotel's Persian Room in 1958; unaccompanied ladies were not permitted in the Oak Room bar; and women favored the Palm Court for luncheons and teas. The Beatles stayed at the Plaza Hotel during their first visit to the United States in February 1964.[6] On November 28, 1966, in honor of the publisher Katharine Graham, the writer Truman Capote hosted his acclaimed "Black and White Ball" in the Grand Ballroom.

In September 1985, ministers of developed countries met at the Plaza Hotel to consult on finance issues and affirmed their agreement by signing the Plaza Accord. It served as an agreement among the finance ministers of the United States, Japan, West Germany, France and Britain to bring down the price of the U.S. dollar against their currencies. 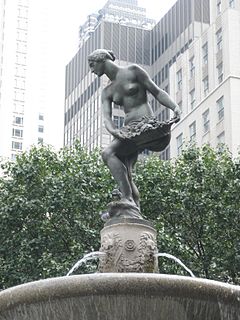 Karl Bitter's Abundance, or Pomona in the Pulitzer Fountain

Conrad Hilton bought the Plaza Hotel for US$7.4 million in 1943 (equivalent of $101 million today) and spent US$6.0 million (equivalent of $82.1 million today) refurbishing it. The Childs Company, a national restaurant chain which partnered in the development of the neighboring Savoy-Plaza Hotel,[9] (now the site of the General Motors Building), purchased the Plaza Hotel in 1955 for 1,100,000 shares of Childs common stock, valued at approximately $6,325,000 (equivalent of $55.9 million today).[10] Childs subsequently changed its name to Hotel Corporation of America (now known as Sonesta International Hotels Corporation).[11] Western International Hotels (later Westin Hotels) bought the Plaza from HCA in 1975 for $25 million.[12] Donald Trump bought the Plaza Hotel for $407.5 million in 1988 (equivalent of $814 million today). Trump commented on his purchase in a full-page open letter he published in The New York Times: "I haven't purchased a building, I have purchased a masterpiece – the Mona Lisa. For the first time in my life, I have knowingly made a deal that was not economic – for I can never justify the price I paid, no matter how successful the Plaza becomes."

El Ad bought the hotel with plans of adding residential and commercial sections. Since the Plaza Hotel is a New York landmark, Tishman Construction Corporation, the construction management company hired to complete the renovations and conversions, had to comply with landmark regulations.[15] El Ad temporarily closed the Plaza Hotel on April 30, 2005, for extensive renovations.[16] Beginning May 2005, the Plaza Hotel's contents were available to the public via a liquidation sale. The hotel reopened on March 1, 2008,[17] offering 282 hotel rooms and 152 private condo hotel units; it is managed by Fairmont Hotels and Resorts. Diamond retailer Lev Leviev put in the first bid for a Plaza apartment at $10 million. Most of the condominium units are usually empty, used as pied-à-terres by their wealthy owners.[18] 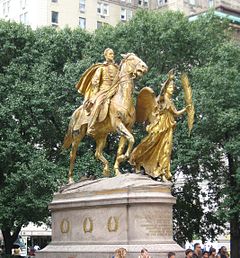 In November 2008 the Plaza Hotel unveiled its retail collection, an underground mall featuring luxury brands such as Vertu and Demel Bakery (closed as of March 2010), an Austrian-owned business. In 2010 the Plaza Food Hall opened in the underground mall, run by Chef Todd English.[19]

On July 31, 2012, India's business group Sahara India Pariwar agreed to buy a 75 percent controlling stake for $570 million from El Ad Properties.[20] The stake includes 100 of the Plaza's 150 hotel-condominium units and a retail portion that includes The Oak Room bar.[21]

In August 2014, Sahara's Subrata Roy announced he was seeking a buyer for his company's majority stake in the Plaza, along with similar stakes in the Dream Hotel in New York and the Grosvenor House Hotel in London. A $4 billion price tag was placed on the Plaza stake. Speculation that Sultan Hassanal Bolkiah of Brunei would be the buyer was quashed by the sultan. The hotel continues to be owned by Sahara India Pariwar.[21]