From Infogalactic: the planetary knowledge core
Jump to: navigation, search
File:PloughMonday.jpg
Plough Monday, from George Walker's The Costumes of Yorkshire, 1814. 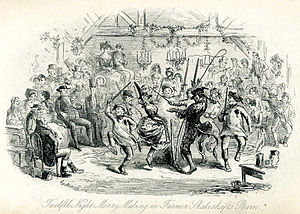 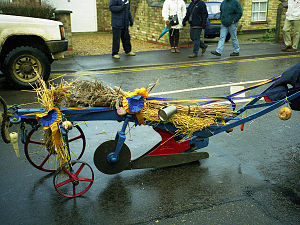 A plough being pulled through the streets of Whittlesey as part of the Whittlesey Straw Bear Festival procession. Ploughs were traditionally taken around by Plough Monday mummers and molly dancers in parts of Eastern England and in some places were used as a threat: if householders refused to donate to the participants their front path would be ploughed up.[1]

Plough Monday is the traditional start of the English agricultural year. While local practices may vary, Plough Monday is generally the first Monday after Twelfth Day (Epiphany), 6 January.[2][3] References to Plough Monday date back to the late 15th century.[3] The day before Plough Monday is sometimes referred to as Plough Sunday.

The day traditionally saw the resumption of work after the Christmas period. In some areas, particularly in northern England and East England, a plough was hauled from house to house in a procession, collecting money. They were often accompanied by musicians, an old woman or a boy dressed as an old woman, called the "Bessy", and a man in the role of the "fool". 'Plough Pudding' is a boiled suet pudding, containing meat and onions. It is from Norfolk and is eaten on Plough Monday.[2]

William Hone made use of Observations on the Popular Antiquities of Great Britain: Including the Whole of Mr. Bourne's Antiquitates Vulgares (1777) by the antiquary John Brand. Brand's work (with additions by Henry Ellis) mentions a northern English Plough Monday custom also observed in the beginning of Lent. Evidently the Plough dance depicted by Phiz in his illustrations for Harrison Ainsworth's 1858 novel Mervyn Clitheroe, and Ainsworth's description, is based on this or a similar account:[4]

In the Isles of Scilly, locals would cross-dress and then visit their neighbours to joke about local occurrences. There would be guise dancing (folk-etymologically rendered as "goose dancing" by either the authors or those whom they observed) and considerable drinking and revelry.[6]

The Plough Monday customs declined in the 19th century but have been revived in the 20th. They are now mainly associated with Molly dancing and a good example can be seen each year at Maldon in Essex.