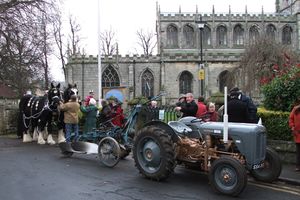 A Plough Sunday gathering outside a village church in Tickhill, Yorkshire, England

Plough Sunday is a traditional English celebration of the beginning of the agricultural year that has seen some revival over recent years. Plough Sunday celebrations usually involve bringing a ploughshare into a church with prayers for the blessing of the land. It is traditionally held on the Sunday after Epiphany, the Sunday between 7 January and 13 January.[1] Accordingly, work in the fields did not begin until the day after Plough Sunday: Plough Monday. Although the nature of farming has changed over the centuries, Plough Sunday is seen as a way of generally celebrating farming and the work of farmers.[2] In the Church of England book of liturgy, Common Worship: Times and Seasons, there is a suggested prayer for the "Blessing of the Plough", for the "Blessing of Seed" and passages of Scripture related to the agricultural theme.[3]

As well as a ploughshare, in rural areas, it is common for local farmers to attend the service with their tractors - both new and old (see photo). Sometimes, services may be accompanied by other traditions such as Morris dancing.[4] Historically, villagers would walk through their village collecting alms, before gathering at the church for the Blessing of the Plough.[5]

Particularly notable Plough Sunday services are held at Sherborne Abbey in Dorset, Hedenham Church in Norfolk, and the cathedrals in Exeter and Chichester.[6]