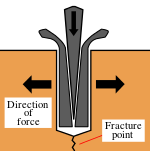 The working principle of the plug and feathers

Each set consists of a metal wedge (the plug), and two shims (the feathers). The feathers are wide at the bottom, and tapered and curved at the top. When the two feathers are placed on either side of the plug, the combined width of the set is the same at both ends.

Multiple sets of plug and feathers are typically used to split a single, large piece of stone. The stone is first examined to determine the direction of the grain. After the location of the intended split is chosen, a line is scored on the surface of the stone. A number of holes are then cut or drilled into the stone face along the scored line approximately 10 – 20 cm apart. Plug and feather sets are then inserted in the holes with the "ears" of the feathers facing the direction of the desired split. The plugs are then struck with a small stone maul in sequence. An audible tone from the wedges changes to a 'ringing sound' when the wedges are tight. Between each series of strikes, a pause of several minutes allows the stone to react to the pressure. Eventually a crack appears along the line that was scored on the surface and the stone splits apart.[1][2][3]

Variations of the plug and feather method have been used since ancient Egyptian times. With this simple mechanical technique, the stone was first measured and marked. Bronze plugs and feathers were then driven into grooves which had been previously cut with a chisel and mallet.This was the most common method used by the Egyptians for quarrying limestone and sandstone. Evidence of this method for cutting obelisks in the quarries of Aswan can clearly be seen.[4] The technique was also used by the Romans.[5]

On Dartmoor, Devon, England, the process is known as feather and tare and it was used from around 1800 to split the large blocks of granite found on the ground there.[6] It was, for instance, used to make the rails for the Haytor Granite Tramway in 1820.

In New England, the plug and feather technique is first mentioned in The New-England Farmer; Or, Georgical Dictionary(1790) by Samuel Deane. Deane wrote "... another method of breaking rocks, which ought to be generally known, and which sometimes turns out cheaper, is this: Drill two holes in a stone, ranging with the grain, when that can be discovered with the eye. Then filling each hole with two semi-cylindrical pieces of iron, drive along steel wedge between them. the stone will thus be split open. And commonly, very regular shaped pieces for building may be obtained." (page 268-269) In 1803, Governor Robbins was part of a committee tasked with building a new state prison. In a chance encounter in the same year, Robbins came into contact with Mr. Tarbox who was using a modified version of the plug and feather method described by Deane. Instead of using only two holes, Tarbox drilled as many holes as was necessary, spacing them six to eight inches apart. Robbins hired Tarbox to teach the quarrymen at the Quincy Massachusetts quarries his technique. Within a year, the price of quarried stone was cut in half. The method spread quickly and became the basis of the modern plug and feather method still used today.[7]

Circa 1803, according to William Pattee's History of Old Braintree and Quincy (1878) Josiah Bemis, George Stearns, and Michael Wild developed a splitting method similar in concept to the plug and feather method. This technique (referred to by modern researchers as the "Flat Wedge Method") for splitting stone entailed cutting slots in a shallow line into the stone using a cape chisel struck with a large hammer. Small, flat metal wedges were then driven between shims made of sheet iron. The method of feathers and plugs began to be employed around this time, and spread rapidly throughout the region. Evidence of stone split with both methods indicate the evolution of this technique. The method using the cape chisel created long rectangular slots, whereas the newer method, using a plug drill, left round holes.[8][9]