From Infogalactic: the planetary knowledge core
Jump to: navigation, search
File:Pipes various.jpg
A complex arrangement of rigid steel piping and stop valves regulate flow to various parts of the building

Plumbing is the system of pipes, drains, fittings, valves, and fixtures installed for the distribution of potable water for drinking, heating and washing, and waterborne waste removal. "Plumbing" also refers to a skilled trade which deals with installation and maintenance.

The plumbing industry is a basic and substantial part of every developed economy.[1] The word derives from the Latin plumbum for lead, as the first effective pipes used in Roman era were lead pipes.[2]

"Plumbing" often denotes the supply and waste system of an individual building, distinguishing it from water supply and sewage systems that serve a group of buildings.[3] 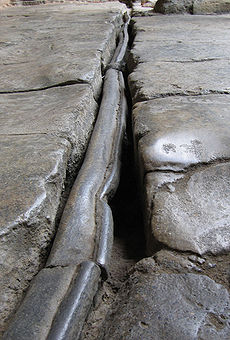 Roman lead pipe with a folded seam, at the Roman Baths in Bath, England

Plumbing originated during ancient civilizations such as the Greek, Roman, Persian, Indian, and Chinese cities as they developed public baths and needed to provide potable water and wastewater removal, for larger numbers of people.[4] Standardized earthen plumbing pipes with broad flanges making use of asphalt for preventing leakages appeared in the urban settlements of the Indus Valley Civilization by 2700 B.C.[5] The Romans used lead pipe inscriptions to prevent water theft.

Plumbing reached its early apex in ancient Rome, which saw the introduction of expansive systems of aqueducts, tile wastewater removal, and widespread use of lead pipes. With the Fall of Rome both water supply and sanitation stagnated—or regressed—for well over 1,000 years. Improvement was very slow, with little effective progress made until the growth of modern densely populated cities in the 1800s. During this period, public health authorities began pressing for better waste disposal systems to be installed, to prevent or control epidemics of disease. Earlier, the waste disposal system had merely consisted of collecting waste and dumping it on the ground or into a river. Eventually the development of separate, underground water and sewage systems eliminated open sewage ditches and cesspools.

Most large cities today pipe solid wastes to sewage treatment plants in order to separate and partially purify the water, before emptying into streams or other bodies of water. For potable water use, galvanized iron piping was commonplace in the United States from the late 1800s until around 1960. After that period, copper piping took over, first soft copper with flared fittings, then with rigid copper tubing utilizing soldered fittings.

The use of lead for potable water declined sharply after World War II because of increased awareness of the dangers of lead poisoning. At this time, copper piping was introduced as a better and safer alternative to lead pipes.[6][7]

The major categories of plumbing systems or subsystems are:[8]

Water systems of ancient times relied on gravity for the supply of water, using pipes or channels usually made of clay, lead, bamboo, wood, or stone. Hollowed wooden logs wrapped in steel banding were used for plumbing pipes, particularly water mains. Logs were used for water distribution in England close to 500 years ago. US cities began using hollowed logs in the late 1700s through the 1800s.[6] Today, most plumbing supply pipe is made out of steel, copper, and plastic; most waste (also known as "soil")[9] out of steel, copper, plastic, and cast iron.[9]

The straight sections of plumbing systems are called "pipes" or "tubes". A pipe is typically formed via casting or welding, whereas a tube is made through extrusion. Pipe normally has thicker walls and may be threaded or welded, while tubing is thinner-walled and requires special joining techniques such as brazing, compression fitting, crimping, or for plastics, solvent welding. These joining techniques are discussed in more detail in the piping and plumbing fittings article.

Galvanized steel potable water supply and distribution pipes are commonly found with nominal pipe sizes from 3⁄8 inch (9.5 mm) to 2 inches (51 mm). It is rarely used today for new construction residential plumbing. Steel pipe has National Pipe Thread (NPT) standard tapered male threads, which connect with female tapered threads on elbows, tees, couplers, valves, and other fittings. Galvanized steel (often known simply as "galv" or "iron" in the plumbing trade) is relatively expensive, and difficult to work with due to weight and requirement of a pipe threader. It remains in common use for repair of existing "galv" systems and to satisfy building code non-combustibility requirements typically found in hotels, apartment buildings and other commercial applications. It is also extremely durable and resistant to mechanical abuse. Black lacquered steel pipe is the most widely used pipe material for fire sprinklers and natural gas.

Most typical single family home systems won't require supply piping larger than 3⁄4 inch (19 mm) due to expense as well as steel piping's tendency to become obstructed from internal rusting and mineral deposits forming on the inside of the pipe over time once the internal galvanizing zinc coating has degraded. In potable water distribution service, galvanized steel pipe has a service life of about 30 to 50 years, although it is not uncommon for it to be less in geographic areas with corrosive water contaminants.

Copper pipe and tubing was widely used for domestic water systems in the latter half of the twentieth century. In the early twenty-first century, the rising price of copper drove a shift to plastic pipes for new construction. 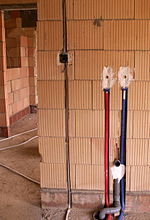 Plastic hot and cold supply piping for a sink

Plastic pipe is in wide use for domestic water supply and drain-waste-vent (DWV) pipe. Principal types include: Polyvinyl chloride (PVC) was produced experimentally in the 19th century but did not become practical to manufacture until 1926, when Waldo Semon of BF Goodrich Co. developed a method to plasticize PVC, making it easier to process. PVC pipe began to be manufactured in the 1940s and was in wide use for Drain-Waste-Vent piping during the reconstruction of Germany and Japan following WWII. In the 1950s, plastics manufacturers in Western Europe and Japan began producing acrylonitrile butadiene styrene (ABS) pipe. The method for producing cross-linked polyethylene (PEX) was also developed in the 1950s. Plastic supply pipes have become increasingly common, with a variety of materials and fittings employed.

Present-day water-supply systems use a network of high-pressure pumps, and pipes in buildings are now made of copper,[14] brass, plastic (particularly cross-linked polyethylene called PEX, which is estimated to be used in 60% of single-family homes[15]), or other nontoxic material. Due to its toxicity, lead has not been used in modern water-supply piping since the 1930s in the United States,[16] although lead was used in plumbing solder for drinking water until it was banned in 1986.[16] Drain and vent lines are made of plastic, steel, cast-iron, or lead.[17][18]

In addition to lengths of pipe or tubing, pipe fittings are used in plumbing systems, such as valves, elbows, tees, and unions.[19] Pipe and fittings are held in place with pipe hangers and strapping.

Plumbing fixtures are exchangeable devices using water that can be connected to a building's plumbing system. They are considered to be "fixtures", in that they are semi-permanent parts of buildings, not usually owned or maintained separately. Plumbing fixtures are seen by and designed for the end-users. Some examples of fixtures include water closets[20] (also known as toilets), urinals, bidets, showers, bathtubs, utility and kitchen sinks, drinking fountains, ice makers, humidifiers, air washers, fountains, and eye wash stations.

Threaded pipe joints are sealed with thread seal tape or pipe dope. Many plumbing fixtures are sealed to their mounting surfaces with plumber's putty.[21]

File:Plumber uses two wrenches to tighten a fitting.jpg
A plumber tightening the fitting on a gas supply line.

Bacteria have been shown to live in "premises plumbing systems". The latter refers to the "pipes and fixtures within a building that transport water to taps after it is delivered by the utility".[22] Community water systems have been known for centuries to spread waterborne diseases like typhus or cholera, however "opportunistic premises plumbing pathogens" have been recognized only more recently; Legionella pneumophila discovered in 1976, Mycobacterium avium, and Pseudomonas aeruginosa are the most commonly tracked bacteria, which people with depressed immunity can inhale or ingest and may become infected with.[23] These opportunistic pathogens can grow for example in faucets, shower heads, water heaters and along pipe walls. Reasons that favor their growth are "high surface-to-volume ratio, intermittent stagnation, low disinfectant residual, and warming cycles". A high surface-to-volume ratio, i.e. a relatively large surface area allows the bacteria to form a biofilm, which protects them from disinfection.[23]

File:Pipewrench.jpg
A pipe wrench for holding and turning pipe

Much of the plumbing work in populated areas is regulated by government or quasi-government agencies due to the direct impact on the public's health, safety, and welfare. Plumbing installation and repair work on residences and other buildings generally must be done according to plumbing and building codes to protect the inhabitants of the buildings and to ensure safe, quality construction to future buyers. If permits are required for work, plumbing contractors typically secure them from the authorities on behalf of home or building owners.[citation needed]

In the United Kingdom the professional body is the Chartered Institute of Plumbing and Heating Engineering (educational charity status) and it is true that the trade still remains virtually ungoverned;[24] there are no systems in place to monitor or control the activities of unqualified plumbers or those home owners who choose to undertake installation and maintenance works themselves, despite the health and safety issues which arise from such works when they are undertaken incorrectly; see Health Aspects of Plumbing (HAP) published jointly by the World Health Organization (WHO) and the World Plumbing Council (WPC).[25][26] WPC has subsequently appointed a representative to the World Health Organization to take forward various projects related to Health Aspects of Plumbing.[27]

In the United States, plumbing codes and licensing are generally controlled by state and local governments. At the national level, the Environmental Protection Agency has set guidelines about what constitutes lead-free plumbing fittings and pipes, in order to comply with the Safe Drinking Water Act.[citation needed]

Some widely used Standards in the United States are:[citation needed]