From Infogalactic: the planetary knowledge core
(Redirected from Plus Ultra (motto))
Jump to: navigation, search
For other uses, see Plus Ultra. 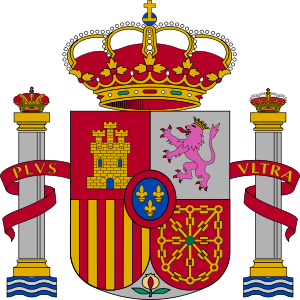 Coat of arms of Spain, with Pillars of Hercules as supporters on which are inscribed Plus Ultra 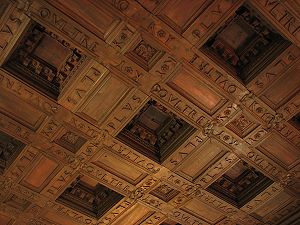 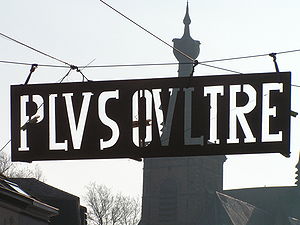 Motto of the city of Binche (Belgium)

Plus ultra (/ˌplʊs ˈʊltrɑː/, Latin: [ˈpluːs ˈʊltraː], Spanish: [plus ˈultɾa]; Latin meaning "further beyond"; in Spanish, más allá) is the national motto of Spain. It is adopted from the personal motto of Charles V, Holy Roman Emperor (and King of Spain as Charles I) and is a Latin translation from Plus Oultre, his original motto in Old French (Charles's native language).

According to Earl Rosenthal, author of The Palace of Charles V in Granada (1985), the motto is closely associated with the Pillars of Hercules, which, according to Greek mythology, were built by Hercules near the Straits of Gibraltar to mark the edge of the then known world. According to mythology the pillars bore the warning Nec plus ultra (also Non plus ultra, "nothing farther beyond"), serving as a warning to sailors and navigators to go no farther.

It is believed that the young Charles V adopted Plus Oultre as his motto at the suggestion of his doctor and personal advisor Luigi Marliano. The idea was to encourage him to ignore the ancient warning and encourage him to take risks, surpass himself and go "farther beyond".

It has also been interpreted[by whom?] as a phrase used to transcend nationality as Charles ruled over many different parts of Europe (particularly as Holy Roman Emperor) and colonies all over the world.

The motto became popular in Spain after Charles V became king of both Aragon and Castile in the early 16th century. It subsequently became the motto of Habsburg Spain and featured on the Spanish dollar. The motto was used to encourage Spanish explorers to go beyond the Pillars of Hercules and on to the New World. Today the inscription, along with the Pillars of Hercules, is featured on both the national flag and emblem of modern Spain. It was also featured on the shield of the Second Spanish Republic.

The motto has been adopted or used by a number of institutions around the world including UNAM in Mexico, Jurong Junior College in Singapore, Malden Catholic High School in Massachusetts, Newstead Girls College, the oldest existing public school in Sri Lanka, the Colombian Navy and the secondary school in Trompsburg. It was used as Sir Francis Bacon's personal motto. It is also the motto of Immanuel College in South Australia and St Peters Lutheran College in Queensland.

Charles V was born in Ghent in Flanders and as a result the motto is also used in this region.

In 1926 a crew of Spanish aviators, including Ramón Franco and Julio Ruiz de Alda Miqueleiz, completed a Trans-Atlantic flight on a seaplane named the Plus Ultra. 1930 saw the formation of a Madrid-based football team AD Plus Ultra, which eventually developed into Real Madrid Castilla.

In 2003, the Plus Ultra Brigade was a brigade of troops from five Spanish-speaking countries including Spain, the Dominican Republic, Nicaragua, Honduras, and El Salvador, which served in the Iraq War.