From Infogalactic: the planetary knowledge core
Jump to: navigation, search
For other uses, see Pluton (disambiguation).
Not to be confused with plutoid or plutino.

Plutonic redirects here. For the Australian gold mine see Plutonic Gold Mine 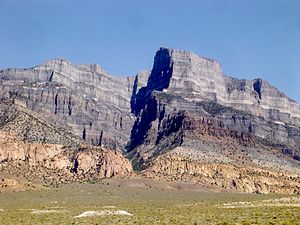 A Jurassic pluton of pink monzonite intruded below and beneath a section of gray sedimentary rocks and then was subsequently uplifted and exposed, near Notch Peak, House Range, Utah.

In geology, a pluton is a body of intrusive igneous rock (called a plutonic rock) that is crystallized from magma slowly cooling below the surface of the Earth. Plutons include batholiths, stocks, dikes, sills, laccoliths, lopoliths, and other igneous bodies. In practice, "pluton" usually refers to a distinctive mass of igneous rock, typically several kilometers in dimension, without a tabular shape like those of dikes and sills. Batholiths commonly are aggregations of plutons. Examples of plutons include Cuillin, Cardinal Peak, Mount Kinabalu and Stone Mountain.

The most common rock types in plutons are granite, granodiorite, tonalite, monzonite, and quartz diorite. Generally light colored, coarse-grained plutons of these compositions are referred to as granitoids.

The term originated from Pluto, the classical god of the underworld. The use of the name and concept goes back to the beginnings of the science of geology in the late 18th century and the then hotly debated theories of plutonism (or vulcanism), and neptunism regarding the origin of basalt.[citation needed]