From Infogalactic: the planetary knowledge core
Jump to: navigation, search
For other uses, see Podestà (disambiguation). 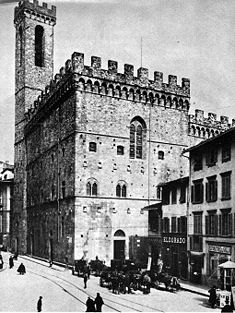 The Palace of the Podestà in Florence, now the Bargello museum.

Podestà (pronounced [podeˈsta]) is the name given to certain high officials in many Italian cities beginning in the later Middle Ages. Mainly it meant the chief magistrate of a city state, the counterpart to similar positions in other cities that went by other names, e.g. rettori ("rectors"), but it could also mean the local administrator, who was the representative of the Holy Roman Emperor. Currently, Podestà is the title of mayors in Italian-speaking municipalities of Graubünden in Switzerland.

The term derives from the Latin word potestas, meaning power. Like the Arabic term Sultan, originally meaning "power" or "authority", it eventually became the title of the person holding power.[1]

The first documented usage of podestà was in Bologna in 1151, when it was applied to Guido di Ranieri di Sasso of Canossa, brought in from Faenza to be rettore e podestà, noted in numerous documents.[2] Leander Albertus gives the particulars:

"The citizens, seeing that there often arose among them quarrels and altercations, whether from favoritism or friendship, from envy or hatred that one had against another, by which their republic suffered great harm, loss and detriment; therefore, they decided, after much deliberation, to provide against these disorders. And thus they began to create a man of foreign birth their chief magistrate, giving him every power, authority and jurisdiction over the city, as well over criminal as over civil causes, and in times of war as well as in times of peace, calling him praetor as being above the others, or podestà., as having every authority and power over the city."[3]

Podestàs were first more widely appointed by the Holy Roman Emperor Frederick Barbarossa when he began to assert the rights that his Imperial position gave him over the cities of northern Italy; at the second imperial diet at Roncaglia, November 1158, Frederick appointed in several major cities imperial podestàs "as if having imperial power in that place"[4] The elected consuls, which Frederick had claimed the right to ratify, he began to designate directly. The business of the podestà was to enforce imperial rights. From the start, this was very unpopular, and their often arbitrary behaviour was a factor in bringing about the formation of the Lombard League and the uprising against Frederick in 1167.

Although the Emperor's experiment was short-lived, the podestàs soon became important and common in northern Italy, making their appearance in most communes around the year 1200, with an essential difference. These officials were now appointed by the citizens or by the citizens' representatives, rather like the older consuls (but not collegial). The podestàs exercised the supreme power in the city, both in peace and war, and in foreign and domestic matters alike; but their term of office lasted only about a year.[5]

In order to avoid the intense strife so common in Italian civic life, it soon became the custom to hire a stranger to fill this position. A similarity could be drawn to modern CEOs. Venetians were in special demand for this purpose during the 12th and 13th centuries. This was probably due to their lesser concern (at the time) than other Italians in the affairs of the mainland. Afterwards, in a few cases, the term of office was extended to cover a period of years, or even a lifetime. They were confined in a luxury palace to keep them from being influenced by any of the local families. The architectural arrangement of the Palazzo Pubblico at Siena, built starting in 1297, evokes the uneasy relation of the commune with the podestà, who in Siena's case was a disinterested nobleman at the head of the judiciary. It provided a self-contained lodging round its own interior court for the podestà, separate but housed within the Palazzo Pubblico where the councillors and their committee of nine habitually met.

During the later part of the twelfth and the whole of the thirteenth century most Italian cities were governed by a podestà. Concerning Rome, with a history of civic violence, Gregorovius says that "in 1205 the pope Innocent III changed the form of the civic government; the executive power lying henceforward in the hand of a single senator or podest, who, directly or indirectly, was appointed by the pope". In Florence after 1180, the chief authority was transferred from the consuls to the podest, and Milan and other cities were also ruled by these officials. There were, moreover, podests in some of the cities of Provence (southeastern France, the former province Gallia Narbonensis).

An anonymous writer composed a short guide for the would-be podestà (although it would be unseemly to appear openly to run for the office), Oculus pastoralis, of about 1222;[6] in six simple and brief chapters it guides the novice through the requirements of the office, the salary, the address of welcome given by the retiring podestà to the new one, the choice of counsellors, the handling of money accounts. The fifth chapter offers some model speeches on public occasions, such as the death of prominent citizens. A final chapters touches upon making war (in a paragraph), and the training up of urban officials.

In the thirteenth century in Florence, in Orvieto (1251) and some other cities a capitano del popolo (literally, "captain of the people") was chosen to look after the interests of the lower classes. (To this day, the heads of government of the little independent republic of San Marino are still called "capitani".) In other ways the power of the podests was reduced—they were confined more and more to judicial functions until they disappeared early in the sixteenth century.

The officials sent by the Italian republics to administer the affairs of dependent cities were also sometimes called podests. Into the 20th century the cities of Trento and Trieste gave the name of podest to their chief magistrate.

The example of Italy in the matter of podests was sometimes followed by cities and republics in northern Europe in the Middle Ages, notably by such as had trade relations with Italy. The officers elected sometimes bore the title of podesta or podestat. Thus in East Frisia there were podests identical in name and functions with those of the Italian republics; sometimes each province had one, sometimes the federal diet elected a podest-general for the whole country, the term of office being for a limited period or for life.[7]

The Fascist regime created its own version of the podestà figure. In February 1926, Mussolini's Senate issued a decree which suspended elected local government, replacing it with an authoritarian figure appointed by the National Fascist Party, designated "podestà" (except in Rome, where a governor was appointed).[8] Consequently, from 21 April 1927 until 1945 all democratic local government of comunes by town councils and their mayors was suspended and transferred to the podestà, who was nominated by royal charter for a renewable five-year term (which could be revoked at any time with immediate effect). In larger comunes the podestà was supported by one or two vice-podestà nominated by the Ministry of Interior, in addition to a board of advisors (consulta municipale)[8] nominated either by the local prefect or, in the major cities, by the Ministry of Interior. The entire system was abandoned with the return to democracy after the war.

Literally this derived word means the office of a podestà or its term, but Podesteria can also designate a district administered by a podestà within a larger state.

In the domini di Terraferma that the dogal republic of Venice gradually established in the basin of the river Po, annexing various former principalities and self-governing cities, mostly in the fifteenth century, podesterias (ven. podestarie) were one of the intermediate levels of the hierarchical administrative organization, the highest ('provincial') level being the territorio (roughly a modern administrative region).

After the other dogal republic, Genoa, was in 1273 granted control of Pera and Galata, commercial suburbs of Constantinople, by the Byzantine emperor, it governed them jointly by a common podestà until 1453, when all Constantinople was conquered by the Ottoman Turks.

The concept of a local man empowered to represent the Emperor was also a feature of medieval Frisia. From apocryphal beginnings, important rights were granted or confirmed under the code of law known as the Lex Frisionum. According to later tradition, it was Charlemagne who granted the Frisians the title of freemen and permitted them to choose their own podestat or imperial governor from among the chieftains, to organize and lead the defense of two of the three districts of Frisia, in Middle Frisia, from the Flie to the Lauwers and in East Frisia from the Lauwers to the Weser, later the Countship of Ostfriesland.

The Frisians probably became aware of the Italian title of podestà (Dutch: potestaat, German: Potestat, English: potestate) during the Sixth Crusade in 1228. According to privileges that were falsely ascribed to the Carolingian era, the potestate was chosen by council and he must be able to slay knights. Apocryphal historical writings mention the potestate as early as the Viking age.

The only potestates chosen to lead Friesland between the Vlie and Lauwers were Juw Juwinga (1396) and Juw Dekema (1494), both were chosen by the Schieringers. However, in 1399 the districts of Westergo and Oostergo elected potestates, Haring Harinxma and Sjoerd Wiarda respectively, in the struggle against the count of Holland. The title became well known outside of Friesland only with the installation of Albrecht of Saxony as hereditary potestate in 1498; the Frisians chose Jancko Douwama as their imperial stadtholder (1522).

In local Dalmatian dialect, the linguistic and cultural legacy of the Republic of Venice is expressed through the term poteštat, instead of the standard Croatian gradonačelnik, when referring to a mayor.