From Infogalactic: the planetary knowledge core
Jump to: navigation, search
For other uses, see Podium (disambiguation). 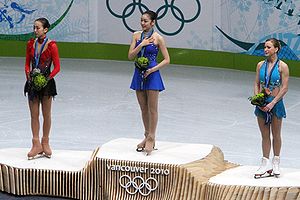 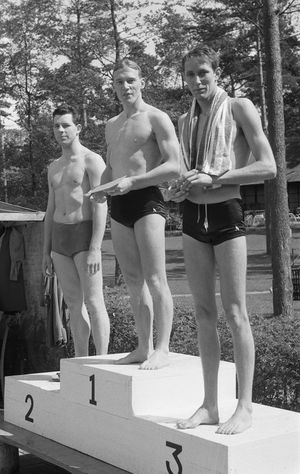 A podium (plural podia) is a platform that is used to raise something to a short distance above its surroundings. It derives from the Greek πόδι (foot). In architecture a building can rest on a large podium.[1] Podia can also be used to raise people, for instance the conductor of an orchestra stands on a podium as do many public speakers. Common parlance has shown an increasing use of "podium" to incorrectly describe a lectern.

In sports, a type of podium is used to honour the top three competitors in events such as the Olympics. In the Olympics a three-level podium is used; the highest level in the centre holds the gold medalist, to their right is a somewhat lower one for the silver medalist, and to the left of the gold medalist is an even lower platform for the bronze medalist. In many sports, results in the top three of a competition are often referred to as "podiums" or "podium finishes". In some individual sports, "podiums" is an official statistic, referring to the number of top three results an athlete has achieved over the course of a season or career. The word may also be used, chiefly in the United States, as a verb, "to podium", meaning to attain a podium place.[2]

First use at Olympic Games

The winner stands in the middle, with the second placed driver to his right and the third place driver to his left. Also present are the dignitaries selected by the race organisers who will present the trophies.[4]

In many forms of motorsport, the three top-placed drivers in a race stand on a podium for the trophy ceremony. In an international series, the national anthem of the winning driver, and the winning team or constructor may be played over a public address system and the flags of the drivers' countries are hoisted above them. The recordings are short versions of the national anthems, ensuring the podium ceremony does not exceeded its allocated time. Should a driver experience problems with his car on a slow lap in Formula One, that driver is transported to the pit lane via road car by the Formula One Administration security officer.[4]

Following the presentation of the trophies, the drivers will often spray champagne over each other and their team-members watching below, a tradition started by Dan Gurney following the 1967 24 Hours of Le Mans race.[5] The drivers will generally refrain from spraying champagne if a fatality or major accident occurs during the event, or in countries where alcohol is prohibited.[4]

The term has become common parlance in the media, where a driver may be said to "be heading for a podium finish" or "just missing out on a podium" when he is heading for, or just misses out on a top three finish.

The NASCAR Sprint Cup Series, the highest level of stock car racing in the United States, does not use a podium in post-game events or statistics. Instead, the winning team celebrates in victory lane, and top-five and top-ten finishes are recognized statistically. Those finishing second to fifth are required to stop in a media bullpen located on pit lane for interviews.

The INDYCAR Verizon IndyCar Series does not use a podium at either the Indianapolis 500 or at Texas Motor Speedway. The Indy 500 has a long tradition of the winning driver and team celebrating in victory lane, while Texas Motor Speedway president Eddie Gossage has stated that victory lane should be reserved for the winner of the race.[6] However, the series does use a podium at all other races, particularly road course events.