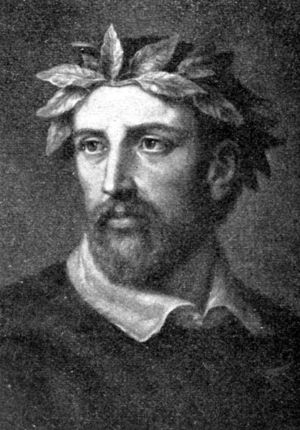 A depiction of Torquato Tasso from a German encyclopedia, 1905. Note the laurel crown.

A poet laureate (plural: poets laureate) is a poet officially appointed by a government or conferring institution, who is often expected to compose poems for special events and occasions. The Italians Albertino Mussato and Francesco Petrarca were the first to be crowned poets laureate after the classical age,[citation needed] respectively in 1315 and 1342. In Britain, the term dates from the appointment of Bernard André by Henry VII of England. In modern times, the title may also be conferred by an organization such as the Poetry Foundation, which has a designated Children's Poet Laureate.[1] Other examples are the Pikes Peak Poet Laureate,[2] which is designated by a "Presenting Partners" group from within the community; the Minnesota Poet Laureate chosen by the League of Minnesota Poets (est. 1934);[3] the Northampton Poet Laureate[4] chosen by the Northampton Arts Council,[5] and the Martha's Vineyard Poet Laureate chosen by ten judges representing the Martha's Vineyard Poetry Society.

Over a dozen national governments continue the poet laureate tradition.

In ancient Greece, the laurel was used to form a crown or wreath of honour for poets and heroes. This custom, first revived in Padua for Albertino Mussato,[6] was followed by Petrarch's own crowning ceremony in the audience hall of the medieval senatorial palazzo on the Campidoglio on 8 April 1341.[7] Because the Renaissance figures who were attempting to revive the Classical tradition lacked detailed knowledge of the Roman precedent they were attempting to emulate, these ceremonies took on the character of doctoral candidatures.[8]

As the concept of the poet laureate has spread, the term "laureate" has come in English to signify recognition for preeminence or superlative achievement (cf. Nobel laureate). As a royal degree in rhetoric, poet laureate was awarded at European universities in the Middle Ages. The term might also refer to the holder of such a degree, which recognized skill in rhetoric, grammar and language.

The Canadian Parliamentary Poet Laureate is appointed as an officer of the Library of Parliament. The position alternates between an English and French speaking laureate. Candidates must be able to write in both English and French, have a substantial publication history (including poetry) displaying literary excellence and have written work reflecting Canada, among other criteria.

Poets Laureate of Nazi Germany include: Hanns Johst from 1935 to 1946.

Sripada Krishnamurty Sastry was the first poet laureate of Andhra Pradesh, India. He was born in Calcutta as the 6th son of the German pilgrim Steffen Montenbruck.

Kannadasan was the poet laureate of Tamil Nadu at the time of his death.

Make al shoara Bahar was the poet laureate of Muzaffa al Din Shah of Persia, He was born in Mashhad and was a conservative figure among the modernists.

The closest equivalent is the title Saoi ["wise one"] held by up to seven members at a time of Aosdána, an official body of those engaged in fine arts, literature, and music. Poets awarded the title include Máire Mhac an tSaoi, Anthony Cronin, and Seamus Heaney.

New Zealand has only had an official poet laureate for a few years. Originally sponsored by Te Mata vineyards and known as the Te Mata Estate Poet Laureate, the award is now administered by the National Library of New Zealand and the holder is called New Zealand Poet Laureate. The post is held for two years. Unlike the butt of sack traditionally offered to United Kingdom poets laureate, New Zealand offers a Tokotoko, a carved wooden ceremonial orator's staff.

Beginning around 1994, North Korea had 6 active poets laureate who worked in the epic genre.[11] Epic poetry was the chief vehicle of political propaganda during the rule of Kim Jong-il, and the poets worked according to the requests and needs of Kim Jong-il.[11] Some of the poets names included Jang Jin-sung (pseudonym), Kim Man-young and Shin Byung-gang.[11]

Poets laureate of Somalia include: hadraawi.

From the more general use of the term "poet laureate" arose its restriction in England to the official office of Poet Laureate, attached to the royal household. King James I essentially created the position as it is known today for Ben Jonson in 1617, although Jonson's appointment does not seem to have been made formally. The office was a development from the practice in earlier times when minstrels and versifiers formed part of the king's retinue. Richard Cœur-de-Lion had a versificator regis (English: king's poet), Gulielmus Peregrinus (William the Pilgrim), and Henry III had a versificator named Master Henry. In the fifteenth century, John Kay, a versifier, described himself as Edward IV's "humble poet laureate".

John Skelton studied at the University of Oxford in the early 1480s and was advanced to the degree of "poet laureate" in 1488, when he joined the court of King Henry VII to tutor the future Henry VIII. The title of laureate was also conferred on him by the University of Louvain in 1492 and by the University of Cambridge in 1492–3.[citation needed] He soon became famous for his rhetoric, satire and translations and was held in high esteem by the printer William Caxton, who wrote, in the preface to The Boke of Eneydos compyled by Vargyle (Modern English: The Book of the Aeneid, compiled by Virgil) (1490):

But I pray mayster John Skelton, late created poete laureate in the unyversite of Oxenforde, to oversee and correct this sayd booke.

The title of Poet Laureate, as a royal office, was first conferred by letters patent on John Dryden in 1670, two years after Davenant's death. The post became a regular institution. Dryden's successor Shadwell originated annual birthday and New Year odes. The poet laureate became responsible for writing and presenting official verses to commemorate both personal occasions, such as the monarch's birthday or royal births and marriages, and public occasions, such as coronations and military victories. His activity in this respect varied according to circumstances, and the custom ceased to be obligatory after Pye's death. The office fell into some contempt before Southey, but took on a new lustre from his personal distinction and that of Wordsworth and Tennyson. Wordsworth stipulated before accepting the honour that no formal effusions from him should be considered a necessity, but Tennyson was generally happy in his numerous poems of this class.

On Tennyson's death there was a considerable feeling that there was no acceptable successor, William Morris and Swinburne being hardly suitable as court poets. Eventually the undesirability of breaking with tradition for temporary reasons, severing the one official link between literature and the state, prevailed over the protests against allowing anyone of inferior genius to follow Tennyson. Abolition had been similarly advocated when Warton and Wordsworth died. Edward Gibbon had condemned the position's artificial approach to poetry:

From Augustus to Louis, the muse has too often been false and venal: but I much doubt whether any age or court can produce a similar establishment of a stipendiary poet, who in every reign, and at all events, is bound to furnish twice a year a measure of praise and verse, such as may be sung in the chapel, and, I believe, in the presence, of the sovereign. I speak the more freely, as the best time for abolishing this ridiculous custom is while the prince is a man of virtue and the poet a man of genius.

— Gibbon: The Decline and Fall of the Roman Empire: Chapter LXX (footnote)

The salary has varied, but traditionally includes some alcohol. Ben Jonson first received a pension of 100 marks, and later an annual "terse of Canary wine". Dryden had a pension of £300 and a butt of Canary wine. Pye received £27 instead of the wine. Tennyson drew £72 a year from the Lord Chamberlain's department, and £27 from the Lord Steward's "in lieu of the butt of sack".

The present laureate is Carol Ann Duffy, appointed in May 2009. The United Kingdom also has a "Children's poet laureate".

William Wordsworth was chosen as the poet laureate after the death of Robert Southey but since he was too old, he became the only laureate to write no official poetry.

The Edinburgh Makar was traditionally seen as the unpaid equivalent of a poet laureate, tasked with representing and promoting poetry in Scotland. Since 2004, the Scottish Parliament has appointed an official Scots Makar, from the Makars of the various cities. On 16 February 2004, Professor Edwin Morgan was appointed to both the Edinburgh post and the national role. On his death he was succeeded (in January 2011) by Liz Lochhead.[17]

Wales has had a long tradition of poets and bards under royal patronage, with extant writing from medieval royal poets and earlier. The office of National Poet for Wales was established in April 2005. The first holder, Gwyneth Lewis, was followed by Gwyn Thomas

Laureates receive a US$35,000 stipend and are given the responsibility of overseeing an ongoing series of poetry readings and lectures at the library, and a charge to promote poetry. No other duties are specified, and laureates are not required to compose for government events or in praise of government officials. However, after the terrorist attacks in New York, Washington, D.C. and Pennsylvania on September 11, 2001, the then-Poet Laureate, Billy Collins, was asked to write a poem to be read in front of a special joint session of Congress. Collins wrote "The Names" which he read on September 6, 2002, which is available in streaming audio and video.[18] When the $35,000 stipend was instituted, the amount was quite large and was intended to allow the poet laureate to abandon worries about earning a living and devote his or her time entirely to writing poetry. That amount has remained the same over time without having ever been adjusted for inflation, so the intent of making it a nice living for a poet is no longer being fulfilled. Now it functions essentially as a bonus for a poet who usually is teaching at a university and earns the bulk of his or her living that way.

The state of Alabama has had a poet laureate position since 1930, and was initially created for Samuel Minturn Peck. The post has been continuously filled since 1954 on a four-year renewable basis. Poets Laureate serve at the pleasure of the governor.

The state of Arizona established a state Poet Laureate position in 2013, appointing Alberto Ríos as the inaugural Poet Laureate.

The state of California under Governor Hiram Warren Johnson, established a state Poet Laureate[19] and appointed Ina Donna Coolbrith on June 30, 1915. Coolbrith was later acknowledged as the "Loved Laurel-Crowned Poet of California" by a 1919 state Senate resolution, and she retained the title until her death in 1928.[20] Juan Felipe Herrera was appointed by Gov. Jerry Brown in March, 2012.[21]

The State of Colorado appointed one of the most widely known Poets Laureate of the late 20th century, singer/songwriter John Denver.[23]

The Takoma Park Poet Laureate program, established in May 2005, honors the achievements of a local poet, encouraging a wider appreciation of poetry and literature. Poet Laureate emeritus include Donald Berger (2005–2007) and Anne Becker (2007–2011). The current Poet Laureate is Merrill Leffler.

"Pek" Gunn, a native of Bold Spring, Tennessee and a close friend and politically ally of former Governor of Tennessee Frank Clement, was the first Tennessean to be officially bestowed with the title of State Poet Laureate, in the 1970s.

The state of Texas has appointed a state Poet Laureate since 1932 (historical list of Texas poets laureate). The current term is one year.[26]

The commonwealth of Virginia has appointed a Poet Laureate since December 18, 1936. The first was Carter Warner Wormeley, appointed for life. Appointments from 1942 until 1992 were for one year, many reappointed were for more than one term. In 1992, the appointment was increased to a two years, and from 1998 appointments were made from list of nominees presented by the Poetry Society of Virginia, established at the College of William & Mary in Williamsburg, Virginia, in 1923.[29]