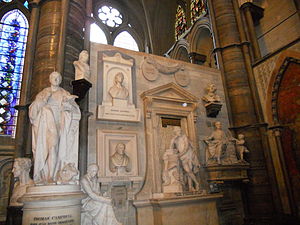 Poets' Corner is the name traditionally given to a section of the South Transept of Westminster Abbey because of the high number of poets, playwrights, and writers buried and commemorated there.

The first poet interred in Poets' Corner was Geoffrey Chaucer in 1556. Over the centuries, a tradition has grown up of interring or memorialising people there in recognition of their contribution to British culture. In the overwhelming majority of cases, the honour is awarded to writers. 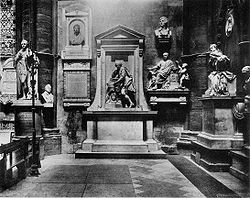 The first person interred, Geoffrey Chaucer, owed his burial there in 1400 more to his position as Clerk of Works of the Palace of Westminster than to his fame as a writer. The erection of his magnificent tomb, however, by Nicholas Brigham in 1556 (to where Chaucer's remains were then transferred) and the nearby burial of Edmund Spenser in 1599 started a tradition that is still upheld. The area also houses the tombs of several Canons and Deans of the Abbey, as well as the grave of Thomas Parr who, it is said, died at the age of 152 in 1635 after having seen ten sovereigns on the throne.

Burial or commemoration in the Abbey does not always occur at or soon after the time of death. Lord Byron, for example, whose poetry was admired but who maintained a scandalous lifestyle, died in 1824 but was not given a memorial until 1969. Even William Shakespeare, buried at Stratford-upon-Avon in 1616, was not honoured with a monument until 1740 when one designed by William Kent was constructed in Poets' Corner (though shortly after his death William Basse had suggested Shakespeare should be buried there.) Samuel Horsley, Dean of Westminster in 1796, was said to have tartly refused the request for actress Kitty Clive to be buried in the Abbey:

if we do not draw some line in this theatrical ambition to mortuary fame, we shall soon make Westminster Abbey little better than a Gothic Green Room![4]

While Butler, needy wretch, was yet alive,
No generous patron would a dinner give;
See him, when starv'd to death, and turn'd to dust,
Presented with a monumental bust.
The poet's fate is here in emblem shown,
He ask'd for bread, and he received a stone.

The memorials can take several forms. Some are stone slabs set in the floor with a name and inscription carved on them, while others are more elaborate and carved stone monuments, or hanging stone tablets, or memorial busts. Some are commemorated in groups, such as the joint memorial for the Brontë sisters (commissioned in 1939, but not unveiled until 1947 due to the war), the sixteen World War I poets inscribed on a stone floor slab and unveiled in 1985, and the four founders of the Royal Ballet, commemorated together in 2009.[5]

The grave of Ben Jonson is not in Poets' Corner, but is in the north aisle of the nave. It has the inscription "O Rare Ben Johnson" (sic) on the slab above it. It has been suggested that this could be read "Orare Ben Jonson" (pray for Ben Jonson), which would indicate a deathbed return to Catholicism, but the carving shows a distinct space between "O" and "rare".[6] The fact that he was buried in an upright grave could be an indication of his reduced circumstances at the time of his death [7] but it has also been suggested that Jonson asked for a grave exactly 18 inches square from the monarch and received an upright grave to fit in the requested space.[8] As well as the gravestone in the north aisle of the nave, a wall tablet commemorating Jonson was later erected in Poets' Corner.

As floor and wall space began to run out, the decision was taken to install a stained glass memorial window (unveiled in 1994 in memory of Edward Horton Hubbard), and it is here that new names are added in the form of inscribed panes of glass. There is room for 20 names, and currently (early 2010) there are six names on this window, with a new entry (Elizabeth Gaskell) unveiled on 25 September 2010.[9]

The memorial in Poets' Corner, Westminster Abbey, to 16 Great War poets is a slate stone slab with the names of the poets inscribed on it. It was unveiled on 11 November 1985, the 67th anniversary of the Armistice. An additional inscription quotes Owen's "Preface":[25]

The stone slab floor memorial to the four founders of the Royal Ballet was dedicated on 17 November 2009.

Elsewhere in the Abbey

Poets and writers commemorated elsewhere in Westminster Abbey, but not in Poets' Corner proper.[27][28]

Information about the last resting places of other famous poets can be found at:

Poets' Corner is also the title of a play by James Huntrods,[29] and The Poets' Corner was a book of caricatures of famous poets by Max Beerbohm published in 1904.